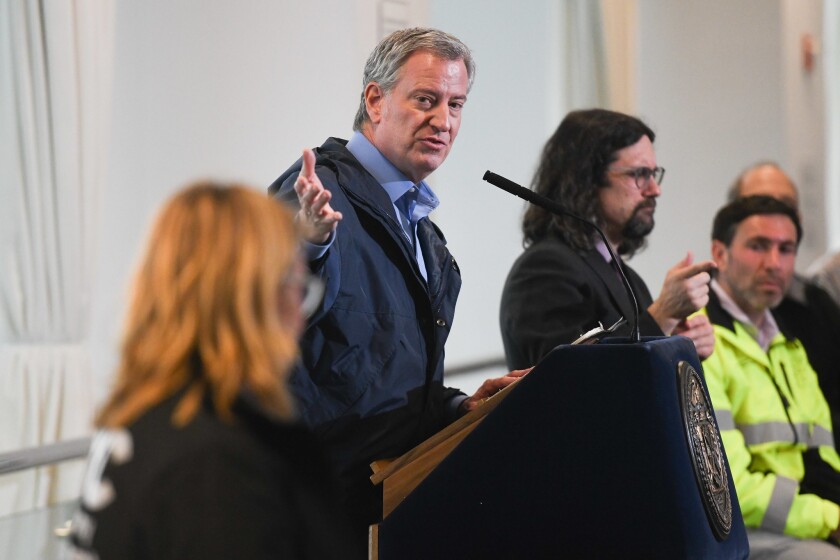 New York City, the hotspot of the COVID-19 crisis in the U.S., received a hit from Wall Street late Wednesday when Moody’s Investors Service revised its rating on the city’s general obligation bonds to negative from stable.

“The rapid and widening spread of the outbreak, deteriorating global economic outlook, falling oil prices, and financial market declines are creating a severe and extensive credit shock across many sectors, regions and markets,” Moody’s said in a statement. “The combined credit effects of these developments are unprecedented.

“We expect a sudden and severe decline in the city’s sales and income taxes as the negative economic effects of efforts to stem coronavirus take hold.”

Moody’s regards the coronavirus outbreak as a social risk under its environmental, social and governance framework, given the substantial implications for public health and safety.

City data has pegged the New York death count from the virus at 1,374. At a briefing on Wednesday, Mayor Bill de Blasio referenced Sunday as a “demarcation line,” after which the numer of virus patients would spike even further.

According to Moodys, spending cuts and other measures will balance the current year, which ends June 30, but more significant spending reductions will be needed for fiscal 2021 to match lower revenues.

De Blasio’s $95.3 billion preliminary budget is before the City Council. He has said he intends to be on time with his executive budget release, scheduled for later this month. He and city budget director Melanie Hartzog are requiring agency heads to cut spending under a program to eliminate the gap, or PEG.

The outlook revision, Moody’s said, also incorporates the mitigating impacts of substantial federal emergency assistance. This includes direct aid to the city through enhanced Medicaid matching and other cash reimbursements, and indirect aid through expanded unemployment benefits and cash payments to individuals that will help support personal income and consumption.

Healthy liquidity entering the coronavirus crisis will help the city bridge the gap between extraordinary public health spending and expected federal reimbursements, according to Moody’s.

“We expect city revenue to return closer to normal patterns when social distancing ends and the economy starts to normalize,” Moody’s said.

The city’s five pension funds are also vulnerable. The watchdog Independent Budget Office has said that if the stock market decline cuts the overall value of its five pension funds 20%, matching the loss in the 2008 recession loss, it could cost New York about $412 million annually in added pension spending over 15 years.

IBO on Wednesday revised that figure from the $386 million in its initial report.