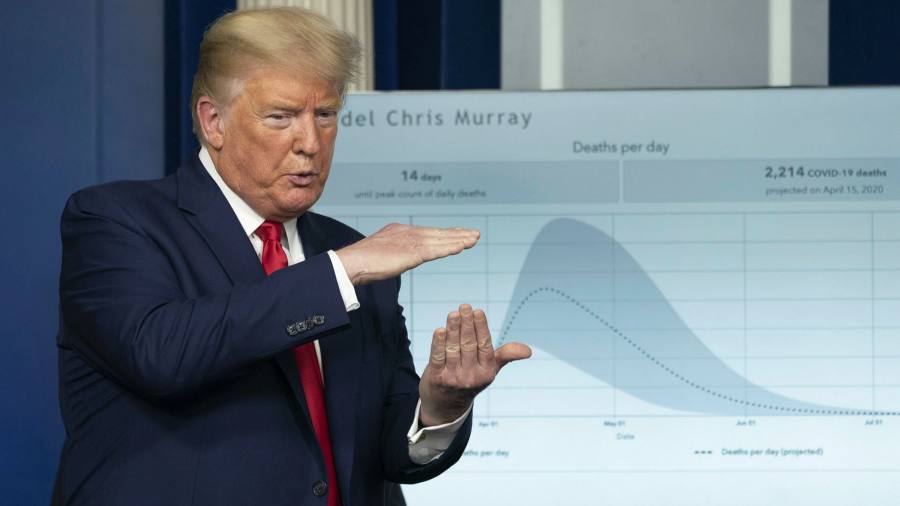 Donald Trump on Tuesday said the US coronavirus death toll could quickly reach almost a quarter of a million people as the president warned Americans to prepare for a “very, very painful two weeks”.

In a dramatic change of tone from his comments on the crisis only days ago, Mr Trump and his top health scientists said there could be between 100,000 and 240,000 deaths even Americans follow the social distancing guidelines the president had recommended until the end of April.

“We’re going to go through a very tough two weeks and then hopefully as the experts are predicting . . . we’re going to see some real light at the end of the tunnel. But this is going to be a very, very painful two weeks,” he said.

The release of the government projections marked something of a turning point for the White House, which until recently had shied away from the most dire predictions and had suggested the country could return to normality in a matter of days.

In a sign of how seriously Mr Trump had taken the data — which aides said formed the basis of his decision to extend federal lockdown recommendations — he repeatedly ceded the White House podium to his two medical experts and listened intently.

Mr Trump appeared at the White House as the number of coronavirus cases in the US rose to 186,000, while the death toll topped 3,800, eclipsing the 2,996 people killed in the September 11 2001 terror attacks.

We lose more here potentially than you lose in world wars.

Asked whether he had been too optimistic in his previous descriptions of the crisis, Mr Trump said his job was to be a “cheerleader” but that the models that his scientists were using showed that the US was about to face an unprecedented period.

“We lose more here potentially than you lose in world wars,” Mr Trump said at his daily White House briefing. There were about 116,000 US deaths in the first world war and 405,000 in the second.

Anthony Fauci, head of the US National Institute of Allergy and Infectious Diseases, and a White House coronavirus task force member, said he hoped that the total would be lower, noting that the current projections are based on data gathered from the hardest-hit states such as New York and New Jersey as well as the course the disease ran in Italy.

But he acknowledged the 100,000-240,000 forecast was the best estimate based on academic models even if the US continues lockdown policies that prevent large gatherings and impose social distancing.

“The reason why we feel so strongly about the necessity of the additional 30 days is that now is the time when you’re having an effect not to take your foot off the accelerator,” Mr Fauci said.