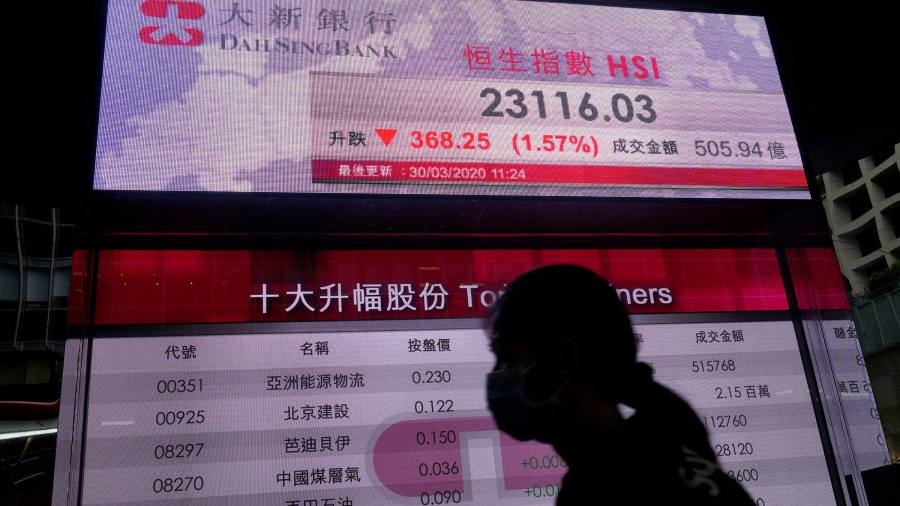 A new quarter has brought a fresh jolt of volatility to global equity markets, with stocks in Europe and Asia dropping as the coronavirus crisis worsens in the US and pressure on economies around the world mounts.

The falls, which follow the worst quarter for global markets since the 2008 financial crisis, came after President Donald Trump warned that nearly 250,000 people could die in the US from Covid-19.

Italy and Spain, the two worst-hit countries in Europe, have shown some signs of improvement in recent days, as the centre of the coronavirus crisis quickly shifts to the US.

“Europe seems to have reached, if not [passed], the peak in new infections,” said Marco Wagner, economist at Commerzbank. “In the US, on the other hand, the situation is becoming more acute. A flattening of the infection curve is still not apparent.”

On Tuesday, Mr Trump warned Americans of a “very, very painful two weeks” ahead while Anthony Fauci, a top government health official, said people should be prepared for high fatalities.

The world’s biggest economy, like many others, has already shown acute signs of strain from the lockdowns prompted by the pandemic, with the number of people seeking unemployment benefits shooting late last month to a historic high of 3m.

In a sign of the heavy blow faced by investors globally, the UK’s biggest banks announced after the close of trading on Tuesday that they would scrap billions of pounds worth of dividends under pressure from the country’s top financial regulator.

Bank shares dropped on Wednesday, with HSBC down about 9 per cent, and Barclays, Lloyds Banking Group and Royal Bank of Scotland falling about 5 per cent.

Business executives in the eurozone, Japan and South Korea reported a marked deterioration in the factory sector in March compared with February, according to purchasing managers’ indices that are closely watched by investors as leading economic indicators.

Robert Carnell, Asia-Pacific head of research at ING, said Wednesday’s Asia PMI readings confirmed a “grim picture” for manufacturers. He added that “the prospect for most economies’ manufacturing sectors as they head into the second quarter is for even more weakness, exacerbated where lockdown measures are newly enacted or tightened”.

Most Asian markets were lower, with Japan’s Topix down 3.7 per cent and South Korea’s Kospi off 3.9 per cent. China’s CSI 300 slipped 0.3 per cent.

The Institute for Supply Management is also set to publish its latest reading on the US factory sector, which is considered to be one of the best forward-looking proxies for the rate of change in US gross domestic product. Economists polled by Reuters expect the ISM gauge to sink to 45 in March from 50.1 the previous month. A reading so far below 50 would point to a significant contraction in the sector.

Global equities had rallied over the last week as investors pinned their hopes on huge stimulus efforts by policymakers and the eventual slowing of the spread of Covid-19.

The yield on 10-year US Treasuries, viewed as a haven during times of market uncertainty, slipped 0.09 percentage points to 0.611 per cent. Yields fall as bond prices rise.