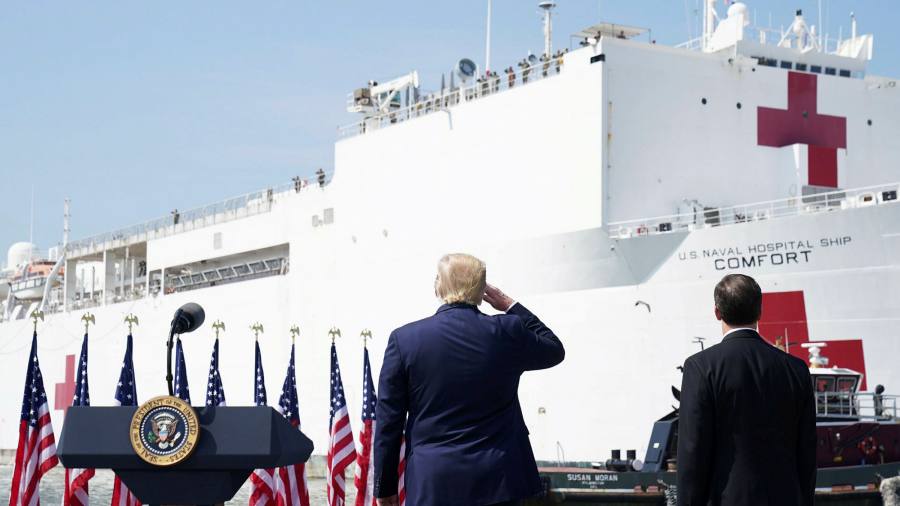 Donald Trump said he is considering imposing a quarantine on the whole of New York state to stop the spread of coronavirus, sparking a row with Andrew Cuomo, the state governor.

The US president said on Saturday he was thinking of imposing a travel ban on people from New York, New Jersey and parts of Connecticut in an attempt to control the spread of coronavirus. New York has been hit by the disease far worse than anywhere else in the US, with 220 people dying in the state over the past 24 hours, taking the death toll to 529.

Mr Trump said that in response, he was considering placing the state under quarantine for up to two weeks. “I am now considering, and will make a decision very quickly, very shortly, a quarantine — because it’s such a hot area — of New York, New Jersey and Connecticut,” he said in a speech on Saturday. “We will be announcing that one way or another fairly soon.”

He said earlier in the day that he was particularly concerned about people travelling from New York to Florida: “A lot of New Yorkers are going down. We don’t want that. Heavily infected.”

Andrew Cuomo, the governor of New York, said he had not spoken to the president about such a move. But he added: “I don’t even know what that means, or how it would be legally enforceable. I don’t even like the sound of it, not understanding what it is.”

Mr Cuomo said on Saturday he would delay both the day on which the state votes for a Democratic presidential candidate and the tax filing deadline as his state continues to see its number of cases rise sharply.

New Yorkers will now vote for a Democratic candidate on June 23, and not have to file their taxes until July 15.

Meanwhile, the president threatened to use wartime powers to compel more US companies to make equipment needed in the fight against coronavirus. The US now tops China as the country with the most reported cases.

On Friday, Mr Trump used the Korean war-era Defense Production Act to instruct General Motors to make ventilators. A day later, he threatened to do the same to two other companies. “We’re looking at two companies that have not lived up to what they said,” he told reporters on Saturday, without naming the companies.

The president has also authorised Mark Esper, the defence secretary, to call up troops from the national reserve and the Home Guard if they had medical skills. Experts said such a move would be almost unprecedented in dealing with a public health emergency.

Michael O’Hanlon, a senior fellow at the Brookings Institution, said: “Most mobilisations deal with natural disasters or, in some cases, riots and enforcement of federal law or, after 9/11, with the threat of terrorism. This may well be a first.”

The number of cases and deaths continues to rise steeply in Europe, which experienced its deadliest day since the coronavirus outbreak began on Saturday.

Spain reported that 832 people had died in the previous 24 hours, while in Italy 919 died — the worst day in any country since the outbreak began.

Tokyo reported 63 new cases on Saturday, a single-day record that prompted fears that Japan, which has been one of the most successful at containing the virus, might be about to experience a second wave of infections. The global number of those with the disease is now more than 600,000.