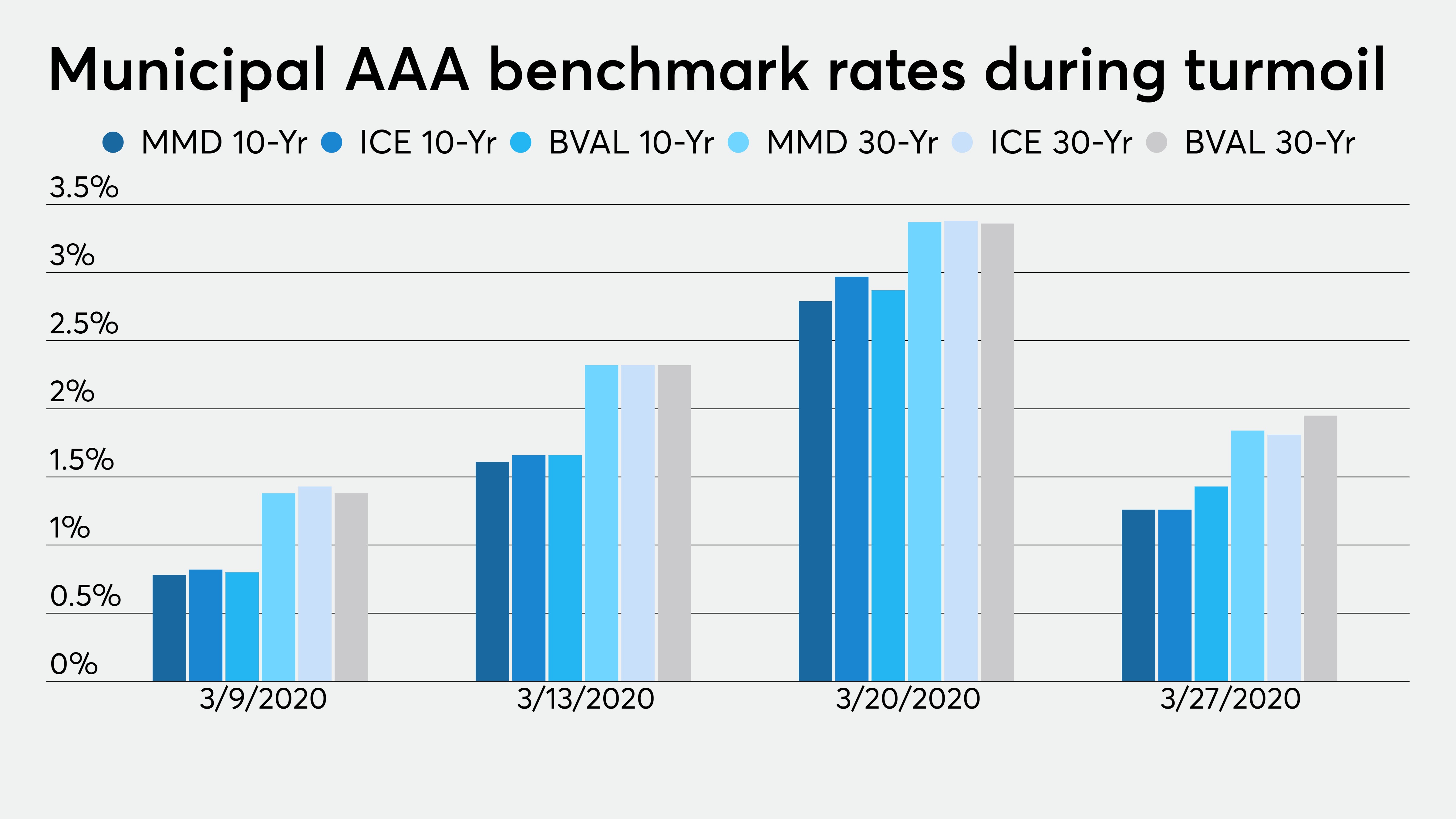 Municipal benchmark yields were five to 10 basis points lower Friday, extending the market’s recent rally through the end of the week.

The municipal market has weathered an unprecedented, volatile month during which the market swung from record-low yields to a 200-basis-point selloff before erasing much of the losses as the impact of the coronavirus ravages the global economy.

The virus led to unprecedented Fed interventions in the markets. For the first time ever, it will buy VRDNs and short- and long-term municipal bonds — a move the Fed did not even consider in the 2008 financial crisis.

The Federal Reserve Board in Washington has hired Treasury Department veteran Kent Hiteshew to help guide it through this new purchasing authority.

The Federal government will provide $2 trillion through a stimulus package passed Friday that will give direct cash payments to governments, industries and individuals to attempt to uphold the U.S. economy.

The municipal primary market essentially shut down for two weeks during the turmoil as benchmark yields wildly swung 50 to 75 basis points in either direction on a given day, with some parts of the yield curve facing 1% changes in a single day.

The municipal market has decoupled from U.S. Treasuries.

During this time, price discovery has been severely challenged, vendors were also struggling to keep up with the massive swings in benchmark rates, which could affect quarterly performance in one of the most volatile time periods. Traders faced massive selling pressure with investors pulling record billions from funds and then a rally this week, reversing some of those losses.

The market had to attempt to calibrate yields and spreads during that time. Average daily volumes jumped 75% per day, while that has calmed some and sources said volumes were up around 62% to end the week.

Participants are taking stock of what occurred during the time and are looking to this week to return to a more normal market. The municipal bond market is poised to begin digesting larger primary issuance once again next week after a massive rally over the past week that saw yields fall providing the sense to participants the very worst is over for now, though most expressed caution.

“The economic impact from COVID-19 has been incredible and it remains to be seen how long the recovery process will take,” said Jamison Feheley, head of public finance banking at JP Morgan. “Many of our clients have been hit very hard and will need access to significant amounts of capital to facilitate economic recovery plans. Through the aggressive actions by the Federal Reserve, we expect markets to stabilize and interest rates to remain low for the remainder of this year creating favorable conditions for issuers to re-enter the market.”

“I think the primary won’t be normal but it will be a new normal,” Brian Wynne, head of public finance for Morgan Stanley. said. “With so much uncertainty, both in rate and in credit, I think everyone is assessing what the effect will be on corporations and municipalities.”

As the market adjusts to work-from-home policies, participants are homeschooling their children while trading or negotiating deals and following the minute-by-minute news of what this virus is causing their own families and communities. The municipal market is still open.

“One of the more positives I have taken away from all of this is how quickly broker dealers and investors and issuers and traders and everyone in our industry have adapted to working in different locations and still getting their jobs done and doing it to the best of their ability,” Wynne said. “Trading volume is well above average and it demonstrates the resiliency of the people in our industry.”

A trader in Florida said “we are seeing bid lists start to slow down a little from the heaviness,” which was largely a glut of short paper in the 2022 camp. “Overall, the market is functioning properly and seems to have found a short-term top for the moment,” he said, predicting that next week’s estimated $3.9 billion in negotiated and competitive transactions will be welcome.

“We are optimistic that a calendar can get priced in this market,” he said Friday, adding that another $14 billion on the day-to-day calendar is waiting in the wings and “could pop into the market.”

Even as the municipal market is starting to retrace its losses, it still faces some short and long-term hurdles.

“This market is still trading on edge,” the Florida trader said. “We do expect mutual funds to come under pressure and potentially continue to see outflows.”

He noted that daily outflows from mutual funds topped $1 billion on Thursday on the heels of a sell-off that took the market by surprise.

“The size of the sell-off in the muni market over the last 10 days caught market participants off guard,” he said, adding that it demonstrated the illiquidity of the municipal market compared to other products.

“Considering the high-grade collateral of our market versus other asset classes, our collateral shouldn’t have sold off that much, but the reason it did was a search for liquidity,” the trader added. 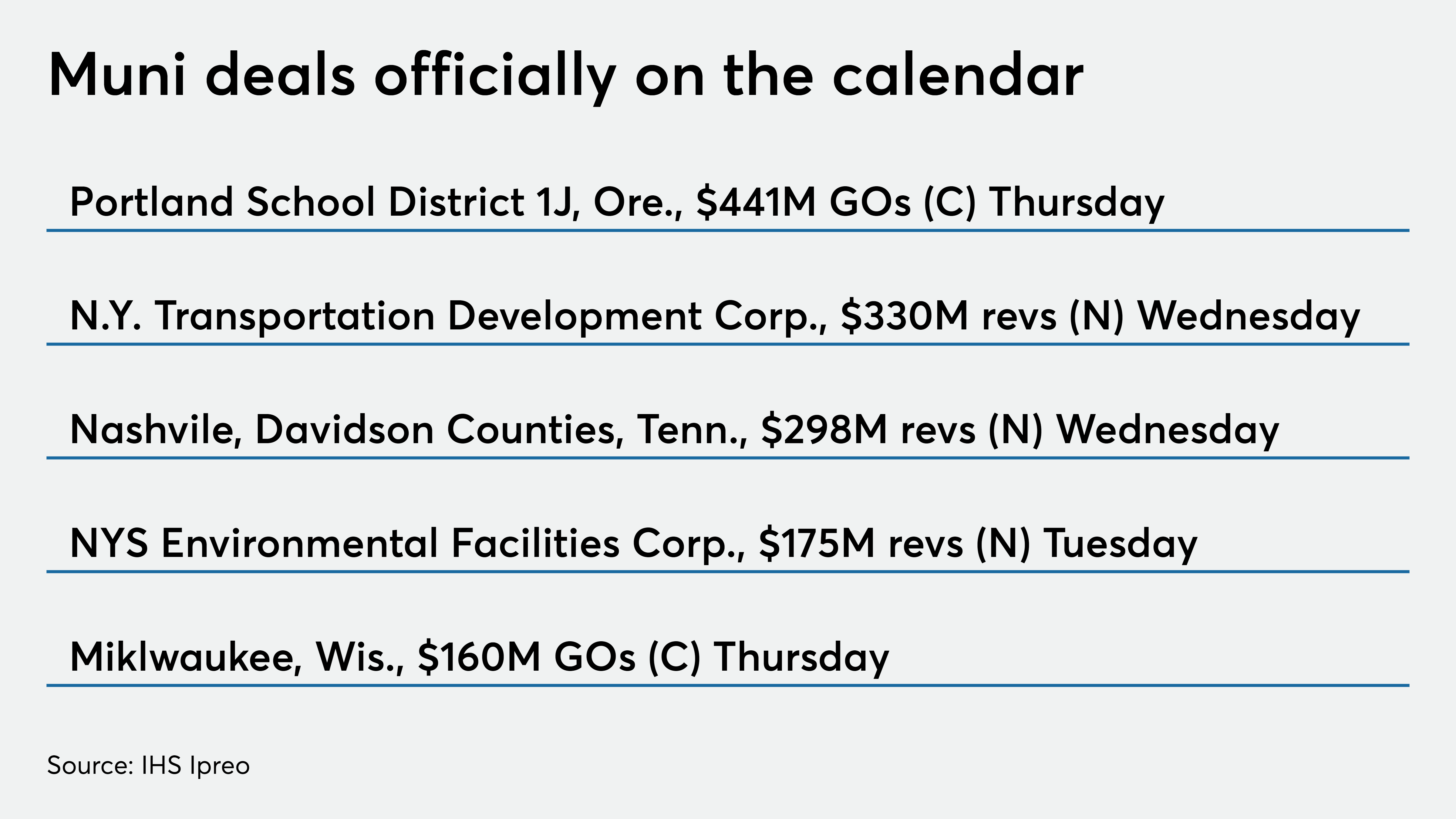 “So far this week, all deals were repriced to lower yields but it’s unclear can they absorb the financing in a short period of time, like two to three days,” Wynne said. “I think what issuers and underwriters are supposed to do is adapt but I am optimistic and positive.

In terms of the type of investor that bought munis the past couple of days, Wynne said that with steep drop in prices and increases in yields, that brought crossover buyers including life and casualty insurance companies, significant renewed interest from the retail buyer and some hedge funds.

Wynne added that while the fundamental muni market model wouldn’t and shouldn’t change, issuers can look to the corporate market for guidance.

“In the corporate world, they look to see what the demand is in the market place and then make a choice to come or not but they also make more macro decisions,” Wynne said. “Corporates have the option to build a wall of cash, where municipalities don’t have that option but the corporate market issuers are more flexible in structure and spread and I think we could do more of that in our market during this time.”

As far as taxables go, absolute yields have gone up and because of that, taxable bonds or taxable advance refundings of tax-exempt debt will slow down a little bit but ratios are significantly in from where they were.

“Although the ratios are still elevated, issuers who access the taxable market which make whole calls, will have opportunity to execute taxable deals on the long end of the curve at more efficient rates,” Wynne said.

Overall, the municipal market has emerged from a liquidity event and may now evolve into a credit deterioration event that could prompt high-yield funds to sell some of their holdings.

Whether or not that will present opportunities remains to be seen.

“We will have to see how it plays out and how deep this goes,” the Florida trader said.

“We know that the economy is going to slow and unemployment is going to rise and cause pressure on businesses — despite the Fed and the White House coming to the rescue,” he added. “We’re open and still taking calls.”

Muni yields fell on Refinitiv Municipal Market Data’s AAA benchmark scale, as the yield on both the 10-year and 30-year muni GO were down by eight basis points to 1.26% and 1.84%, respectively.

Stocks were in the red on Friday, ending a three day streak of being positive and Treasury yields were mostly lower still and the three month was still in negative yielding territory for the third day in a row. 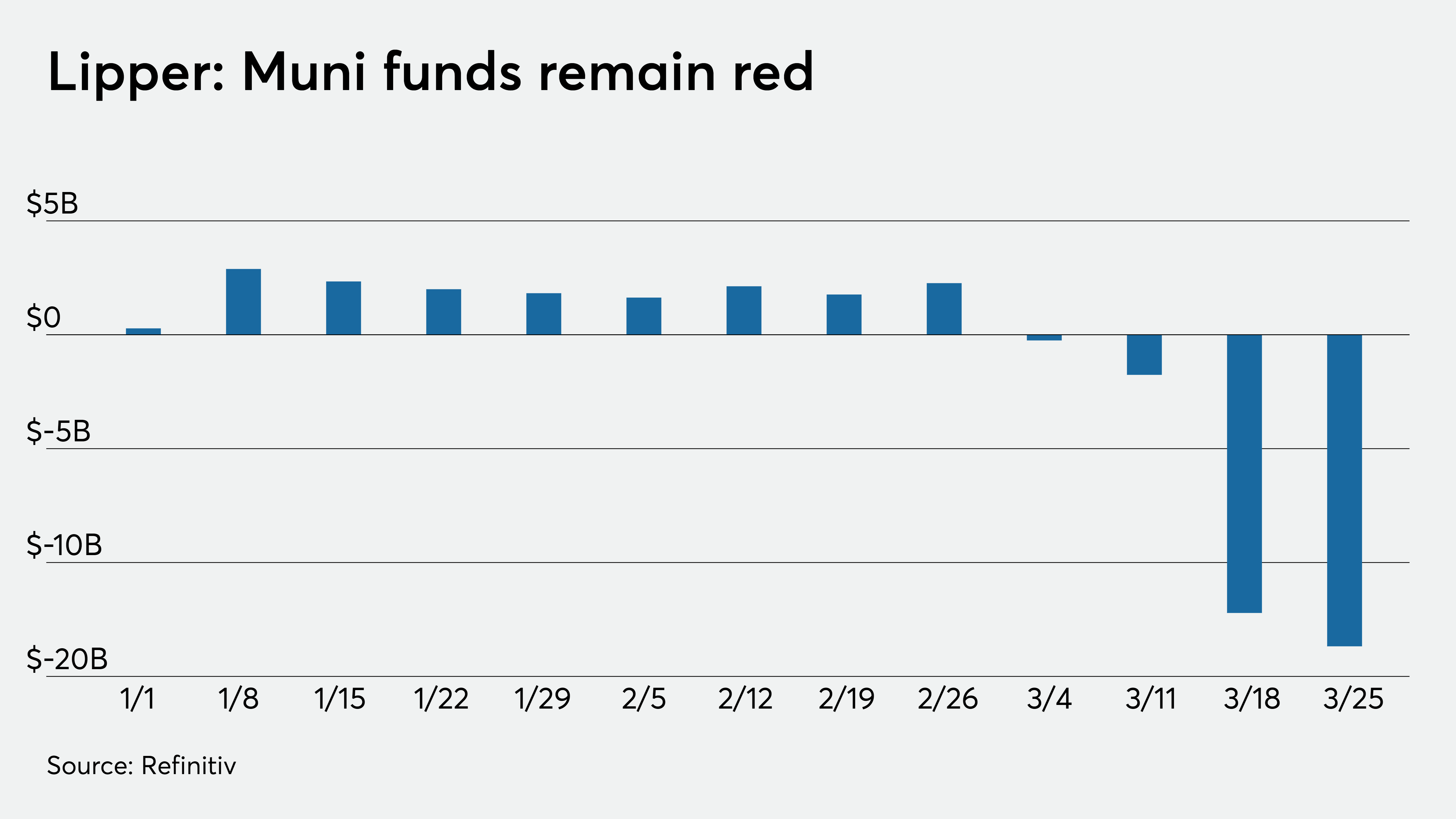 For the fourth week in a row, investors pulled cash from the municipal market and this time the outflows were even greater.
In the week ended March 25, weekly reporting tax-exempt mutual funds suffered $13.678 billion of outflows, after outflows of $12.214 billion in the previous week, according to data released by Refinitiv Lipper late on Thursday.

“Lipper had previously reported outflows of $11.6 billion in the week ended March 18, but that estimate was lower than the industry-wide weekly survey by ICI which found withdrawals totaled $19 billion,” said Patrick Luby, senior municipal strategist at CreditSights. “In sum, based on the combination of the data from ICI and the estimate from Lipper, MTD flows now exceed $35 billion and year-to-date flows are negative.”

The four-week moving average was negative even more at $6.975 billion, after being in the red at $2.989 billion in the previous week.

The weekly average yield to maturity of the Bond Buyer Municipal Bond Index, which is based on 40 long-term bond prices, jumped 22 basis points to 4.04% from 3.82% the week before.

Christine Albano and Chip Barnett contributed to this report.