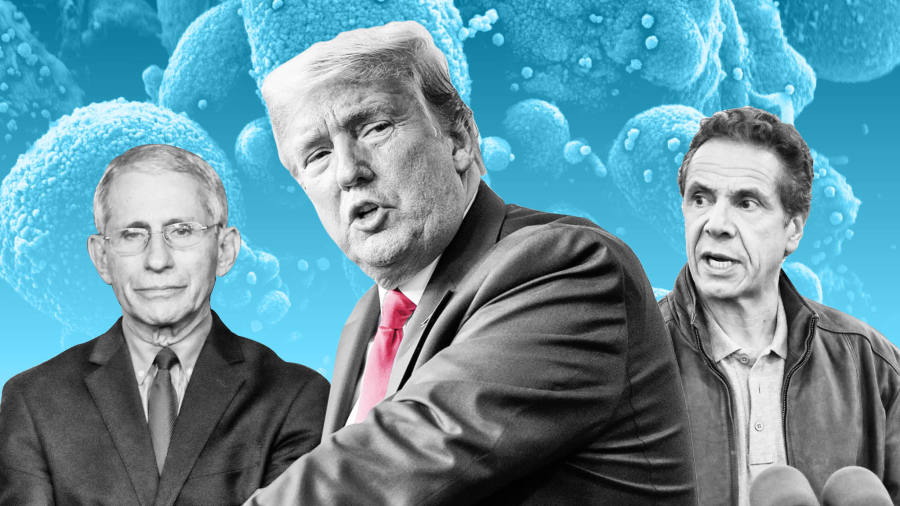 Only four weeks ago, Donald Trump was brimming with confidence that the coronavirus pandemic would have little impact on the US. “It’s going to disappear,” the president said at the White House on February 28. “One day it’s like a miracle, it will disappear.”

Just how wrong that prediction turned out to be was made clear by three statistics released on Thursday. The US has overtaken China to have more cases of the virus than any other country, with its death toll now more than 1,300.

The government announced that 3.3m people filed jobless claims in just the previous week — almost five times the previous record — after shutdowns across the country have brought much of the economy to a halt. And in New York, which is fast becoming one of the global epicentres of the disease, the city’s emergency services received more medical calls than they did on September 11 2001.

Across the country, governors and mayors are pleading for help from Washington to secure more ventilators and other medical supplies and imploring residents to stay at home to prevent the spread of the virus.

Mr Trump’s response has been to float the idea of reopening the economy by Easter. “You’ll have packed churches all over our country,” he told Fox News on March 24. “It’ll be a beautiful time.”

This is the split-screen crisis that Americans are witnessing — a tussle of facts and narratives that is shaping the way the federal government manages the pandemic, the outlook for the economy and November’s presidential election. On the one hand, there is a relentless flow of grim news as the disease takes hold in America’s cities. “We’re now looking at a bullet train, because the numbers are going up that quickly,” Andrew Cuomo, the Democratic governor of New York, warned this week.

But the view from the White House is very different. With his eyes firmly fixed on his re-election prospects, Mr Trump has held daily news conferences where he has regularly played down the seriousness of the pandemic.

The almost farcical nature of the situation was highlighted last week when Anthony Fauci, a world renowned infectious diseases expert who serves on the coronavirus task force, was asked how he could stand at the White House podium as the “representative of truth and facts” when the president was providing misleading information.

“I can’t jump in front of the microphone and push him down,” a very blunt Mr Fauci told Science magazine.

Some of Mr Trump’s harshest critics had comforted themselves with the idea that while they saw the leader as incompetent, at least the US had not faced an existential crisis during the three years he has been in charge. But the coronavirus crisis has exposed how a president whose trademark response is bluster is ill-prepared to deal with a pandemic.

“Trump’s uneven, confusing, chaotic, self-centred and often ignorant bragging is prompting a growing chorus of criticism from scientists, healthcare professionals, the press and more,” says David Gergen, a Harvard Kennedy School professor who has advised four US presidents from Richard Nixon to Bill Clinton. “He thinks that he and his team have done ‘amazing’, ‘incredible’ work [while] critics think he has become increasingly dangerous.”

While Congress on Friday passed a $2tn stimulus to deal with the impact of coronavirus, the president has received withering criticism from many Democrats and some Republicans over the slow federal response, the inadequate level of testing and his push to ease social distancing guidelines to rescue the sinking economy.

Mr Trump wants to halt the economic rout — in a move critics view as a brazen effort to help his re-election. But he has faced pushback even from some close allies, including Wyoming congresswoman Liz Cheney, who said: “There will be no normally functioning economy if our hospitals are overwhelmed and thousands of Americans of all ages, including our doctors and nurses, lay dying because we have failed to do what’s necessary to stop the virus.”

A recent poll conducted by Morning Consult found that 80 per cent of American adults thought it was important to continue social distancing even if that sustained the damage to the economy.

On Thursday, Mr Trump wrote to US governors to outline a plan that would see the administration categorise counties as low, medium or high-risk, in a strategy tailored to allow economic activity to return in some areas.

But Larry Hogan, the Republican governor of Maryland and chair of the bipartisan National Governors Association, told the Financial Times that Mr Trump had not mentioned the plan when he had spoken to the governors shortly before sending the letter. Moreover, Mr Hogan pours cold water on the plan, saying it was not realistic.

A president’s reactions as the crisis deepened

‘It’s going to disappear. One day, it’s like a miracle, it will disappear’

‘Nothing is shut down, life & the economy go on. At this moment there are 546 confirmed cases of coronavirus, with 22 deaths. Think about that!’

When asked how he rated his response: ‘I’d rate it a 10. I think we’ve done a great job’

“Since we’re not doing enough testing, I don’t know how you could possibly make a determination as to which counties are low risk or high risk or medium risk,” he says, adding that governors would have a “lot of concern”.

Mr Hogan applauds the White House for last week making the Federal Emergency Management Agency responsible for helping states procure masks and ventilators, some of which have been delivered. But he says it was just a “tiny percentage” of the needs. “We’re just so far behind and there doesn’t seem to be enough supply anywhere in the country to handle the surge that we’re expecting . . . in all the states.”

While New York has overtaken Washington as the hardest-hit state, cases have spread across the US with rising numbers reported from Florida to Texas. Scott Gottlieb, former head of the Food and Drug Administration, said 11 states had more cases than any Chinese province except Hubei, which includes Wuhan, where the virus originated.

“Our epidemic is likely to be national in scope,” Mr Gottlieb wrote.

In New York, 37,000 people have tested positive, with 5,000 in hospital and almost 400 deaths. Bodies are being stored in refrigerated lorries after the morgues became too full.

Hospitals also face big problems securing equipment to protect staff. On Thursday, Mount Sinai West, a Manhattan hospital, lost one of its nurses to coronavirus. Preparing for a worsening situation, Mr Cuomo has commandeered the Javits Center, an events venue, to become a makeshift hospital, while a military ship will provide another 1,000 beds. He is also requiring hospitals across the state to expand capacity by at least 50 per cent, in an effort to reach a target of 140,000 beds.

But those efforts are nowhere near enough, says Theodora Hatziioannou, a virologist at The Rockefeller University in New York, who estimates that 240,000 New Yorkers may need hospitalisation. “We should have been preparing.”

Mr Trump has angered critics by not using a Korean war-era law that would allow him to force companies to make badly needed equipment. “Ventilators, ventilators, ventilators”, Mr Cuomo said about his biggest need. The president on Friday urged General Motors in a tweet to open its “stupidly abandoned Lordstown plant” and make ventilators “fast”.

The president has received some credit for banning flights from China in January, and imposing travel restrictions on Europe.

Greg Martin, president-elect of the Society of Critical Care Medicine, praised the moves but said he should have procured equipment, such as masks. “We could have increased our stockpile of those things.”

“That’s insane. Are you trying to kill the population?” says Ms Hatziioannou.

Mr Trump this week lashed out at suggestions that he was prioritising his re-election over the health of the public. “There are certain people that would like it to do financially poorly, because they think that would be very good as far as defeating me at the polls,” he said.

But fuelling fears that his focus was the politics, he skirted questions about whether his advisers agreed. Mr Fauci later followed in the footsteps of other advisers who have tried to neutralise his comments, by saying Easter was simply an “aspirational” date.

“His public approval rating is moving north while his professional reputation is moving south. One rarely sees such a split,” says Mr Gergen, adding that he may be helped by the “rally round the flag” effect that helped George W Bush after the 9/11 terror attacks.

On Thursday, Mr Trump said he wanted to act “pretty quickly” on opening the economy and might start with “large sections of our country that aren’t so seriously affected”, suggesting that he could ease social distancing guidelines for some cities and states next week

But while Mr Trump can ease national social distancing guidelines, the decision to order and reverse lockdowns lies almost entirely with governors, limiting his room to manoeuvre.

Mr Hogan says the US is “nowhere near the point where we can relax and let down our guard” and stressed that most of the governors would take their cues from experts, not the White House.

“You can’t put an artificial timeframe and say it’s all going to be better in two weeks,” says Mr Hogan. “We’re trying to make decisions that . . . save the lives of thousands of people.”