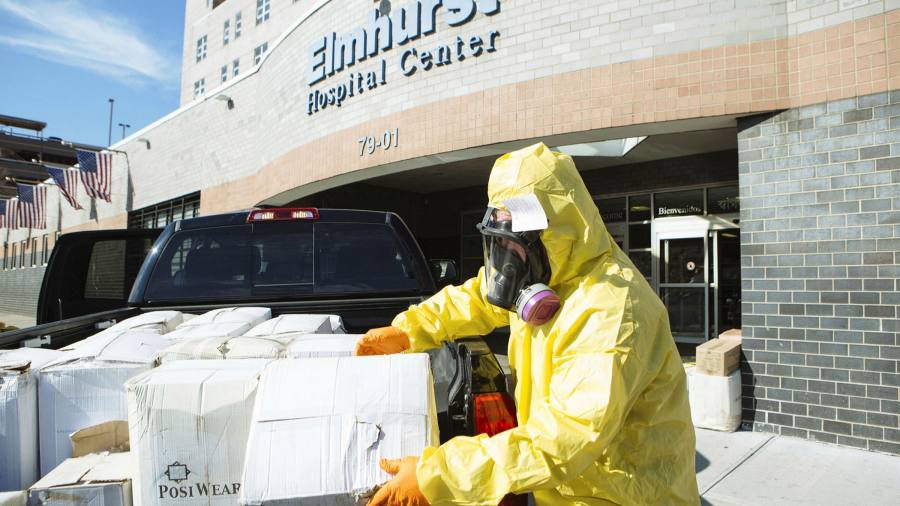 The US has overtaken China to become the country with the largest number of confirmed coronavirus cases in the world, with 81,943 Americans now testing positive for Covid-19.

State-by-state figures published late on Thursday showed confirmed cases of coronavirus in the US had overtaken the 81,285 cases reported by China, with the biggest outbreaks in New York, New Jersey and California. A total of 1,177 Americans have died from the rapidly-spreading virus.

Donald Trump, the US president, said the figures were a “tribute to our testing” and that he would speak to Chinese President Xi Jinping later on Thursday.

“Number one, you don’t know what the numbers are in China,” Mr Trump said at a White House press conference. “We are testing tremendous numbers of people.”

The latest US figures underscore how the centre of gravity for the coronavirus pandemic has shifted from Asia to the West. The US overtook China on the same day Beijing said it was temporarily suspending visits from almost all foreign nationals — a marked reversal to policies implemented in the US and Europe in January to limit travellers coming from the Asian country.

China, where the global outbreak first began, does not include positive tests from people who did not exhibit symptoms in its totals, casting doubt on the data. There are now 523,163 confirmed coronavirus cases worldwide, according to a tally by Johns Hopkins University.

Beijing’s decision to block arrivals by foreign nationals, announced by China’s foreign ministry on Thursday, will prevent entry by almost all holders of visas and residence permits starting from Saturday. A small number of diplomatic visa holders would be exempt, the ministry said.

In its announcement, the ministry said it had “no alternative” to the new restriction given the mixed response to the pandemic in other countries. It did not mention which countries it believed were at fault.

Beijing told a group of global health officials this week that it had been forced to rethink policies after the moderation of its lockdown triggered an influx of overseas travellers who may be carrying the virus, according to Anthony Fauci, a member of the White House’s coronavirus task force.

“Our Chinese colleagues are very concerned,” said Dr Fauci, who said the fears were raised on a call organised by the World Health Organization. “They have very, very few [new] cases, but what they’re starting to see as they’re relaxing the constraints on travel, that they’re getting imported cases.”

The US government has also imposed strict travel restrictions in an effort to stem the spread of Covid-19, banning foreign nationals travelling from China, Iran, the UK, Ireland, and the EU’s Schengen passport-free travel area from entering the US.

Last week, China for the first time reported it had recorded no new Covid-19 cases from local transmissions and began easing its internal travel restrictions, including to and from Hubei province, the origin of the coronavirus outbreak.

Beijing’s move to ban foreigners returning to China raises concerns that the global lockdown may not be sufficient to snuff out the outbreak since it threatens to flare up once restrictions are lifted.

Less than two months ago, several countries, including the US and Italy, issued similar restrictions on those travelling from China.

At the time, Beijing reacted angrily, saying it ran counter to WHO guidance that travel restrictions would hamper the movement of critical equipment and healthcare personnel.

“It is certainly not a gesture of goodwill,” a foreign ministry spokesperson said of the January 31 decision by the US to limit entry to travellers from China.

In announcing its new restrictions, China said that besides the exemption for diplomats, others seeking waivers from the ban — including those who need to come to the country for urgent humanitarian reasons — must apply from an overseas embassy or consulate in advance.