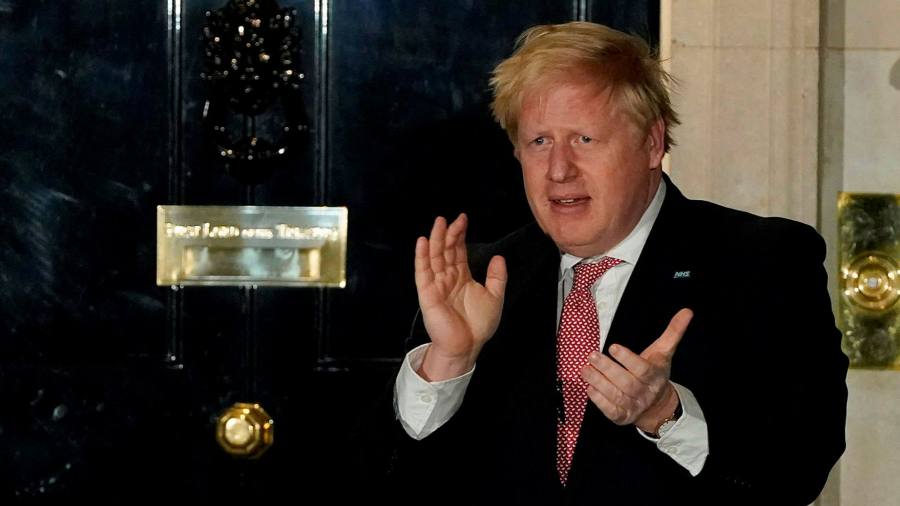 Number 10 said Mr Johnson had mild symptoms, notably a temperature and a cough, and would self-isolate for the next seven days. But officials insisted that he would continue to lead the government’s response to the crisis.

Mr Johnson posted a video on Twitter in which he said the public should “be in no doubt that I can continue, thanks to the wizardry of modern technology, to communicate with all my top team to lead the national fightback against coronavirus”.

His official spokesman said the prime minister “will do the same things” but they “will be done exclusively via teleconferencing on his part.”

Dominic Raab, the foreign secretary and first secretary of state, would stand in for Mr Johnson if he became incapacitated.

After experiencing mild symptoms on Thursday, Mr Johnson was tested for coronavirus by National Health Service staff on the personal advice of England’s chief medical officer, Chris Whitty. He received the results of the test at midnight.

All work and food will be left at the door of Mr Johnson’s flat above No 11 Downing Street, his official spokesman said on Friday.

“Number 11 in its entirety will serve as the Prime Minister’s office and his home — he lives above Number 11 in the flat”, they said.

“The doors between Number 10 and Number 11 have been closed off to all other staff who work in the building. The PM will work from the office and the study in Number 11, which has been kindly vacated by the chancellor.

“Full video conferencing facilities have been installed in those downstairs rooms in Number 11. All Number 10 staff will observe Public Health England guidelines on contact with the PM and will of course remain two metres apart from him at all times if they were to have any contact.”

Questions have been raised over who the prime minister may have come into contact with over the past few days.

An undisclosed number of Downing Street staff have also decided to self-isolate after displaying mild symptoms.

Number 10 indicated on Friday that Mr Johnson’s pregnant fiancée Carrie Symonds was not currently living in Downing Street, as he will be self-isolating for 7 days and not two weeks, which is the guidance for whole households.

Pregnant women are among those who are being strongly advised to self-isolate and limit social contact for up to three months.

Questioned on whether Ms Symonds was living in the flat, the spokesman said: “The Prime Minister of course follows all of the guidelines which have been issued by Public Health England in full.

“His circumstance is such that he will be required to self-isolate for seven days.”

Government officials confirmed that the chancellor, Rishi Sunak, was not displaying any symptoms of the virus, nor was he self-isolating.

A Buckingham Palace spokesperson said the Queen last saw Mr Johnson over two weeks ago. “Her Majesty the Queen remains in good health”, they said in a statement. “The Queen last saw the prime minister on the 11th March and is following all the appropriate advice with regards to her welfare.”

Mr Johnson’s diagnosis comes after Prince Charles, the heir to the British throne, on Wednesday became the most prominent public figure in the UK to be confirmed as having coronavirus.

In his video message, Mr Johnson thanked “everybody who’s involved” in containing the virus and reiterated that the public should follow the government’s social distancing and self-isolating instructions where relevant.

“The more effectively we all comply with those measures, the faster our country will come through this epidemic and the faster we’ll bounce back,” he said. “So thank you to everybody who’s doing what I’m doing, working from home, to stop the spread of the virus from household to household.