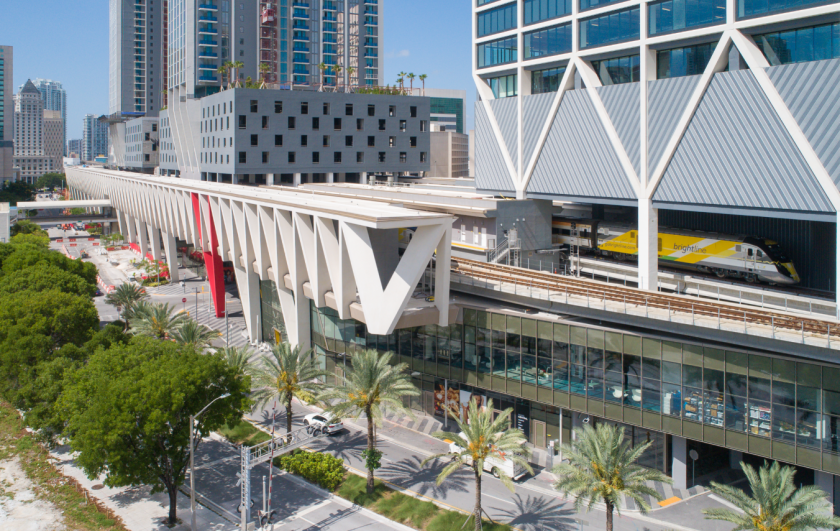 As the last train pulled out Wednesday night, Virgin Trains USA tweeted that all of its passenger service in South Florida had been suspended, with no expected date for it to resume.

The company, whose trains still bear the Brightline logo, also laid off 250 workers due to the quickly spreading novel coronavirus in its current operating territory between Miami and West Palm Beach, most of which is a hotspot for the disease in Florida.

“Like all businesses, we are operating in a period of uncertainty which may last several months,” President Patrick Goddard said in a release. “Although a difficult decision, we have decided to temporarily suspend Brightline service in the best interest of the entire South Florida community as we all seek to flatten the curve.”

Goddard, who was referring to containing the spike in COVID-19 cases to prevent from overwhelming health systems, also said the company is taking proactive measures with its construction teams “to keep people employed and continue construction between Orlando and West Palm Beach.”

Virgin Trains had planned a mandatory tender of some or all of $950 million of flexible-rate bonds on March 17, which were issued last year with an interest rate of 1.90%.

“The $950 million has a mandatory tender date of June 18,” Ben Porritt, senior vice president of corporate affairs, said in an email Thursday. “Under the existing structure we were able to move that from March to June.”

The debt is part of three allocations of tax-exempt private activity bonds by the U.S. Department of Transportation. Those were $600 million issued in 2017 and redeemed last year along with the separate issuance of $1.15 billion and the $950 million.

The $1.15 billion deal set aside funds for certain reserves, but a debt service reserve isn’t expected to be funded until passenger rail service begins between Orlando and West Palm Beach in 2022, according to the official statement.

“We’ve pre-paid interest until 2022,” Porritt said. “All work related to Orlando continues and we see no adverse impact on our timeline.”

Porritt also said the company planned to release a voluntary disclosure about the shutdown on the Municipal Securities Rulemaking Board’s EMMA filing system. He provided a copy to The Bond Buyer.

“During the period of service suspension, we will be reducing staffing levels so that the suspension is not expected to have a material net financial impact on our business and we have access to ample operating liquidity to withstand a protracted slowdown in the travel market,” the disclosure said. “We plan to monitor the situation and evaluate an appropriate time to re-open service so that we can resume building on the strong momentum we have established in South Florida.”

The USDOT didn’t immediately response to a request for comment about whether Virgin Trains, because of its ownership structure, would qualify for relief provided to corporations in the CARES Act, which passed the U.S. Senate Wednesday night.

The company, because it is privately owned, doesn’t publicly release annual audits. It has released monthly construction, passenger and revenue reports on EMMA.

For February, when the virus was relatively scant in the U.S., the company said it carried 109,630 passengers for a 39% increase over the same month in 2019. Year-over-year commuter passholders grew by 137% to 647, the company said in a report that was issued for bondholders on March 20.

“We continued to see strong year-over-year growth in early March, though we expect ridership for the full month to be impacted by coronavirus concerns and the related decline in travel throughout South Florida,” the report said. “We have implemented enhanced cleaning procedures on our trains and in our stations, and believe our guests take comfort in our many ‘touchless’ features such as automatic doors and bathroom fixtures.”

Bob O’Malley, vice president of corporate development, was among those who were laid off.

“I’m sad to share that I’ve been laid off from Virgin Trains USA, but still proud of our good work in FL, CA & NV,” O’Malley tweeted Wednesday night. “I’ll continue to advocate for transportation, which will be even more important in the post-pandemic recovery. And obviously I’m looking for a new job, so please RT.”