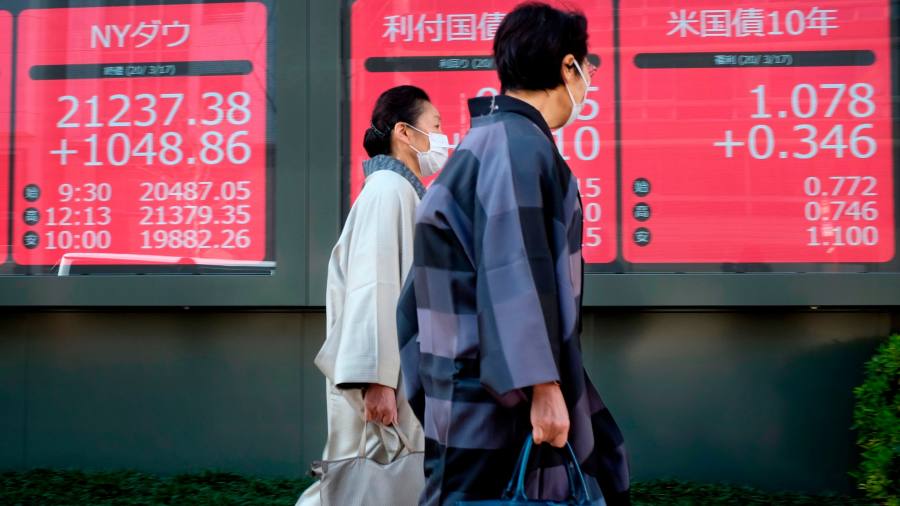 Japanese stocks led a strong rebound for Asia-Pacific markets after the prospect of a $2tn coronavirus stimulus package propelled Wall Street to its best day in more than a decade.

The rally came despite an increasingly dire situation in terms of the pandemic, as organisers postponed the Tokyo 2020 Olympic Games and the global death toll gathered pace.

In early trading on Wednesday, Japan’s Topix rose 4.5 per cent as hedge funds and leveraged retail traders covered short positions, taking the Tokyo benchmark’s gains for the week to more than 8 per cent. Australia’s S&P/ASX 200 rose 1.7 per cent while South Korea’s Kospi index gained 4.3 per cent. China’s CSI 300 added 2 per cent and Hong Kong’s Hang Seng was 2.2 per cent higher.

Markets are putting faith in unprecedented intervention by governments around the world. The gains in Asia came as the US Congress said it was close to agreeing a nearly $2tn coronavirus economic support package.

The prospect of a boost for the US economy drove the benchmark S&P 500 up 9.4 per cent overnight, its biggest one-day gain since 2008. However, futures markets pointed to a drop of 1.5 per cent for US stocks later when Wall Street opens.

“I can find no justification for the markets’ current enthusiasm,” said Robert Carnell, head of Asia-Pacific research at ING. The rapid increase in cases worldwide was “eye-watering”, he said, warning the White House’s call to quickly end the US economic lockdown risked serious damage.

Dealers in Tokyo said the two-day surge in Japanese stocks was disconnected from economic fundamentals. “We are seeing markets dominated by fast money. Some long-only clients are coming back to scoop up the names they liked all along, but mostly this is the momentum traders dictating the direction of travel again,” said one broker.

In Tokyo, where some brokers suggested markets may have hit a floor last week, the Nikkei 225 average surged 5.7 per cent to reclaim the 19,000 line. The gains for the Topix took it to nearly 1,400 points.

The return to those levels, said traders, will come as a relief to the central bank, which has ploughed more than ¥1tn ($9bn) into the Japanese equity market in March in a bid to support markets.

The Bank of Japan’s now decade-long programme of buying exchange traded funds is controversial. The Nikkei’s recent plunge below 19,000, according to JPMorgan calculations, had taken the central bank’s portfolio into the red and the BoJ potentially into hot water politically.

Demand for haven assets was muted, with the 10-year US Treasury yield edging down 0.02 percentage point to 0.823 per cent. Yields fall as bond prices rise.

Brent crude, the international oil benchmark, climbed 2.5 per cent to $27.85 a barrel while US marker West Texas Intermediate rose 3.1 per cent to $24.75.