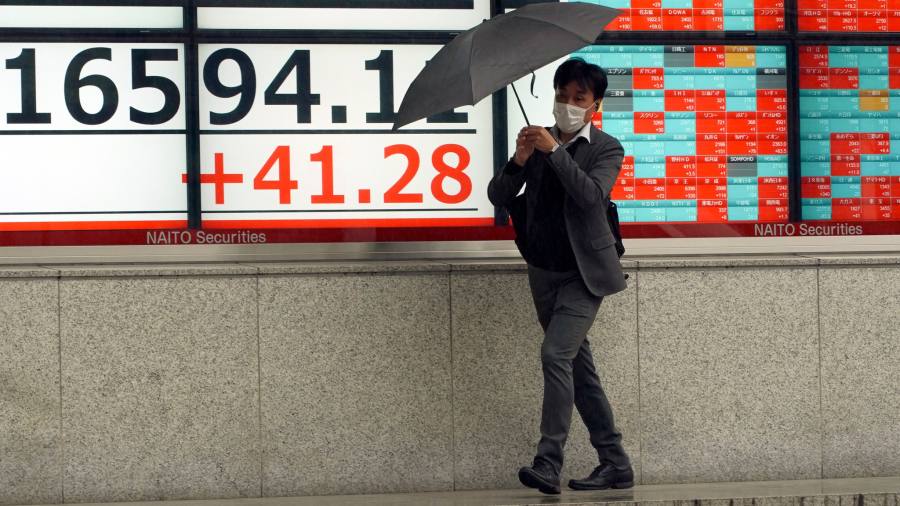 Global stock markets rallied sharply on Tuesday, buoyed by this week’s efforts by the US Federal Reserve to support the economy and as Congress closed in on an agreement for a fiscal stimulus to alleviate the effects of the coronavirus.

The US S&P 500 was up almost 8 per cent per cent at lunchtime in New York and European bourses jumped, with the continent’s Stoxx 600 index up 7 per cent. London’s FTSE 100 rose 7 per cent, while Frankfurt’s Dax advanced 9 per cent.

The rally in Europe followed significant rises in Asia as investors digested the Fed’s pledge to buy an unlimited amount of bonds, which appeared to have relieved some of the strains in important fixed income markets.

“Overall, the response is broader, and bigger than during 2008/2009 financial crisis. But this is more global, and more serious. If you take a step back and look at what the Fed has done . . . it’s incredible,” he said.

In the US, a $2tn stimulus package was under discussion on Capitol Hill, with some negotiators predicting a deal by the end of the day. Democrats have insisted on stringent limits on how big businesses use coronavirus rescue funds.

The dollar, which has surged amid the crisis, weakened to provide some respite for vulnerable currencies including the British pound, which rose more than 2 per cent to $1.18.

The 10-year US Treasury yield gained 0.10 percentage points to just over 0.87 per cent. The price of Brent crude, the international oil marker, rose 2 per cent to $27.50 a barrel.

The economic picture remains bleak across the world. Surveys showed on Tuesday that business activity in Europe crumbled this month, providing some of the first glimpses into the extent of the damage to the region’s economy caused by the pandemic.

Analysts said the real situation was likely even worse, as more restrictive measures banning social contact came into force in most countries after the surveys were taken.

Credit Suisse said on Tuesday that it expected the S&P 500 to rise by 20 per cent from current levels by the end of the year, but its chief US equity strategist Jonathan Golub warned there will be further pressure on stocks in the coming weeks as poor economic data tests investor confidence further.

“For the US economy to be able to come out of the current crisis and the ongoing recession relatively unscathed, more radical policy interventions will be needed in the next few weeks,” said Anna Stupnytska, global head of macro and investment strategy at Fidelity International.

“It’s still anyone’s guess how deep this actually is,” said Bert Colijn, a senior economist at ING. “Perhaps most relevant is how much unemployment and bankruptcies can be avoided to determine the possible steepness of a recovery.”