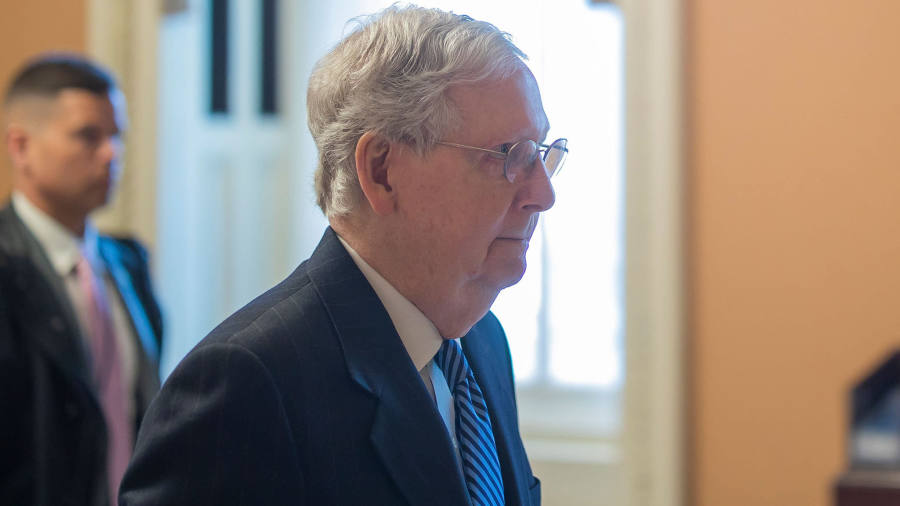 Mitch McConnell has slammed Democrats’ refusal to back Senate Republicans’ proposals for a nearly $2tn economic stimulus package, in stark comments that call into question assurances from Steven Mnuchin, the US Treasury secretary, that a deal is “very close”.

Mr McConnell, the Senate’s top Republican, said on Monday afternoon that Democrats were pushing a “wish list” of progressive policies, including tax credits for solar and wind energy and new emissions standards for airlines, that had “nothing whatsoever” to do with the spread of the coronavirus and resulting economic fallout.

“Are you kidding me?” Mr McConnell said on the Senate floor. “That is what they are up to over there, and the American people need to know it. Democrats won’t let us fund hospitals or save small businesses unless they get to dust off the Green New Deal.”

The Republican-controlled Senate held a procedural vote on the stimulus package on Sunday, but just 47 senators voted in favour of the measure, far short of the 60 votes needed to move ahead. With 53 Republicans in the Senate, Mr McConnell will need the support of at least a handful of Democrats if he is to pass the legislation.

Mr McConnell spent most of the weekend locked in talks with Chuck Schumer, his Democratic counterpart in the Senate, and Mr Mnuchin, who is negotiating on behalf of President Donald Trump and the White House. Nancy Pelosi, the Democratic Speaker of the House, has also been involved in discussions. Ms Pelosi is expected to introduce a separate stimulus proposal drawn up by House Democrats on Monday afternoon.

Speaking after Mr McConnell on the Senate floor on Monday, Mr Schumer insisted that negotiations were ongoing and that lawmakers were “very close to reaching a deal” by the end of the day.

His comments echoed those of Mr Mnuchin, who told CNBC on Monday morning that the White House was “very close” to a deal, adding: “We need to get this thing passed today.”

Democrats have taken issue with Republicans’ proposals, saying they are too generous to big businesses and do not include enough limitations on large corporations in line to receive taxpayer-backed bailouts.

Elizabeth Warren, the Democratic senator from Massachusetts and former presidential candidate, has been among the most vocal lawmakers calling for increased oversight of companies that receive government aid.

At the weekend, she said the Republican-drafted bill “creates a slush fund for the big guys and no help for workers and no help for hospitals, and I don’t see how the Democrats can possibly support that”.

The Senate remains in session, even after Rand Paul, the Republican senator from Kentucky, became the first senator to test positive for Covid-19 at the weekend. Mr Paul reportedly used the Senate gym and other facilities, even after being tested for the coronavirus, raising concerns about exposure for other lawmakers, including Utah Republicans Mitt Romney and Mike Lee, who are now in self-quarantine.

Amy Klobuchar, the Democratic senator from Minnesota and former presidential candidate, said on Monday morning that her husband, John Bessler, was receiving oxygen in a hospital in Virginia after coughing up blood and testing positive for the virus. Ms Klobuchar is continuing to work in the Senate because she has not been in contact with her husband in the last two weeks.