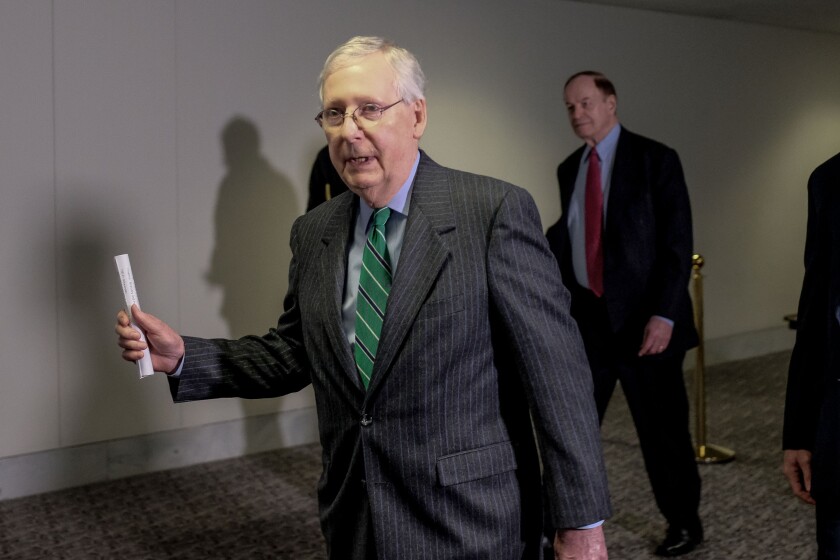 A bipartisan group of governors and congressional Democrats are separately pressing Senate Republicans to insert provisions to help state and local governments into an evolving stimulus bill to address the coronavirus pandemic.

The initial draft of the bill released Thursday by Senate Republicans did not include any direct aid to state governments that has been requested by the National Governors Association.

The Coronavirus Aid Relief and Economic Security Act addresses four priorities, according to McConnell, providing direct help to Americans, rapid relief for small businesses and their employees, significant steps to stabilize the economy and more support for health care workers and patients.

The Senate GOP package proposes sending so-called “recovery checks” of up to $1,200 per adult directly to American households, deferring various tax obligations and giving $208 billion to the Secretary of the Treasury, through the Exchange Stabilization Fund, to provide collateralized loans and loan guarantees to businesses.

But the package does not address the need for emergency funding for state and local governments or publicly owned airports.

Republican Gov. Larry Hogan of Maryland told President Trump in a conference call Thursday that one of the consensus requests among governors is “to dedicate at least 50 percent of the supplemental funding to the states, including some direct funding, and acting quickly on waiver requests.”

State governments, according to Hogan, are in a good position to know the real needs and get the money out faster.

“You’re doing the stimulus for those industries that are being hurt and getting those checks out to the people that need them,” Hogan said. “But if we have the money in the states, we can really utilize it, I think, faster and push it out, sort of like we do on other things with block grants.”

Democratic Sen. Robert Menendez of New Jersey also wants the bill to allow the Federal Reserve, upon a vote by five or more of its members, to authorize Federal Reserve Banks to purchase municipal bonds on the open market.

Bloomberg Barclays indices show that municipal bonds are headed for an 8% drop in March, their worst monthly performance since 1981.

“States and localities are on the front lines in the fight against COVID-19 and need assistance from the federal government to be able to finance the increasing costs of the response to this health emergency,” Menendez said in a press statement. “The Municipal Bonds Emergency Relief Act would do that by allowing the Federal Reserve to provide support to state and local governments for this crisis and similar future emergencies.”

Americans for Financial Reform, a coalition of organized labor and liberal advocacy groups, also has recommended that Congress mandate the Fed to purchase municipal debt to help state and local efforts to fight the pandemic and related economic fallout.

The U.S. Conference of Mayors is asking Congress for $250 billion to deal with effects of the coronavirus including money for public health departments, revenue shortfalls by transit agencies, assistance for school districts and other needs.

“Leader McConnell’s proposal does not do nearly enough to address the public health crisis in terms of hospitals, medical supplies, beds, doctors, nurses, measures to ensure that American can have access and afford coronavirus treatments,” Schumer said. “The bottom line is very simple. If we don’t deal with the health crisis, nothing we do will make the economy any better.”

Although McConnell has talked about the possibility of a fourth coronavirus supplemental spending bill at some point, Schumer said the third bill also should address the financial plight of hospitals.