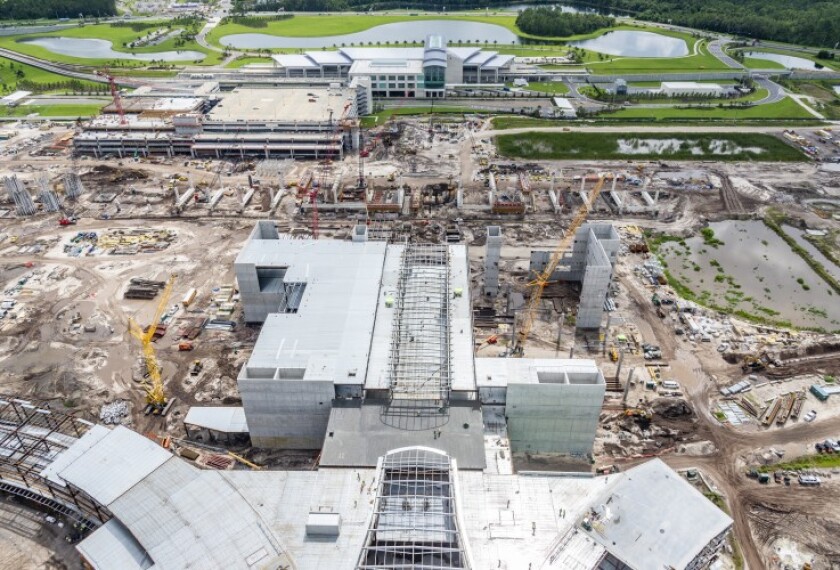 Florida’s busiest airport is seeing a precipitous decline in flights and passengers amid the novel coronavirus outbreak, which has forced the closing of major theme parks like Walt Disney World and area hotels.

Orlando International Airport has already seen a 36% year-over-year decrease in passengers since an expanded federal international travel ban became effective and travelers cancelled flights because of the highly contagious COVID-19.

“We have about 324 days of operating cash on hand, but in these kinds of environments that can evaporate very quickly,” Greater Orlando Aviation Authority Executive Director Phillip Brown told his board of directors Wednesday.

Debt service reserve funds will be used to make bond payments, if necessary, but “it will call into question our creditworthiness,” said Brown, a public investment banker who specialized in airports at UBS Investment Bank before joining GOAA in 2010.

“We are going through an analysis of where we can cut costs,” he said, adding that he is working with airport directors in Florida and across the country who are seeking financial relief from Congress. If the airport obtains federal funds those will be used to make debt service payments, he said.

“I don’t know that we’re going to get to zero activity, but we will have diminished activity,” Brown said. “All in all, the flight activity is decreasing pretty precipitously.”

Airport officials are also determining whether to close some food, beverage and merchandize concessions because of lower volume, he said, adding, “That is an ongoing dialogue as I’ve had several instances of requests for relief. We are looking at how we could do that.”

Brown said some concessionaires have requested waivers from minimum financial guarantees they are required to provide to the airport. Airlines have also requested the airport cut costs so they can maintain some of their margins because passenger volumes are down, he added.

The problems driven by efforts to slow the spread of the virus, come as OIA is undergoing a $4.12 billion largely bond-financed capital improvement program. GOAA had $759 million of outstanding senior bonds, as well as $1.02 of subordinate debt and $333 million of secondary subordinate lines of credit outstanding as of Oct. 2, 2019

On Friday, Moody’s Investors Service revised the U.S. airport sector to negative from stable, a change it says reflects expectations for the fundamental business conditions in the sector over the next 12 to 18 months.

“As the spread of coronavirus continues, government prohibitions and recommendations against travel are driving more people to cancel or not book travel,” Moody’s analysts said. “The estimated severity of loss and the potential for a slower recovery of travel demand make a return to stability in the second half of the year unlikely.”

The severity of non-airline revenue loss within the year will strain the traditional rate recovery model because airlines will also be limited in their ability to pay contractually required increased rates in a timely manner, they said.

“We expect airports will be pressured to use portions of their historically strong liquidity to provide rate relief to airlines over the next few months and possibly through the end of the year,” the analysts said.

American Airlines said it would ground 55,000 flights in April and will park 450 planes — about half of its fleet — in response to decreased demand and travel restrictions due to the coronavirus pandemic, according to the Miami Herald.

At Orlando International Airport, Brown said 1,005 flights were scheduled with 44,000 departing passengers Wednesday and 54 flights were cancelled. Before spring break, he said the airport was experiencing more than 60,000 passengers daily.

At Hilltop Securities, the airport sector was lowered to cautious from stable on Monday because of the “unprecedented circumstances airlines and airports find themselves in,” said Tom Kozlik, the company’s head of municipal strategy and credit.

“With the potential slowing of enplanements we remain concerned with what the next three to six months holds, based on the extraordinary steps that have been taken internationally and across the U.S.,” he said in a commentary Thursday.

Neither the mayor nor the council’s representatives responded to requests for comment about whether suspending those payments would violate bond covenants.