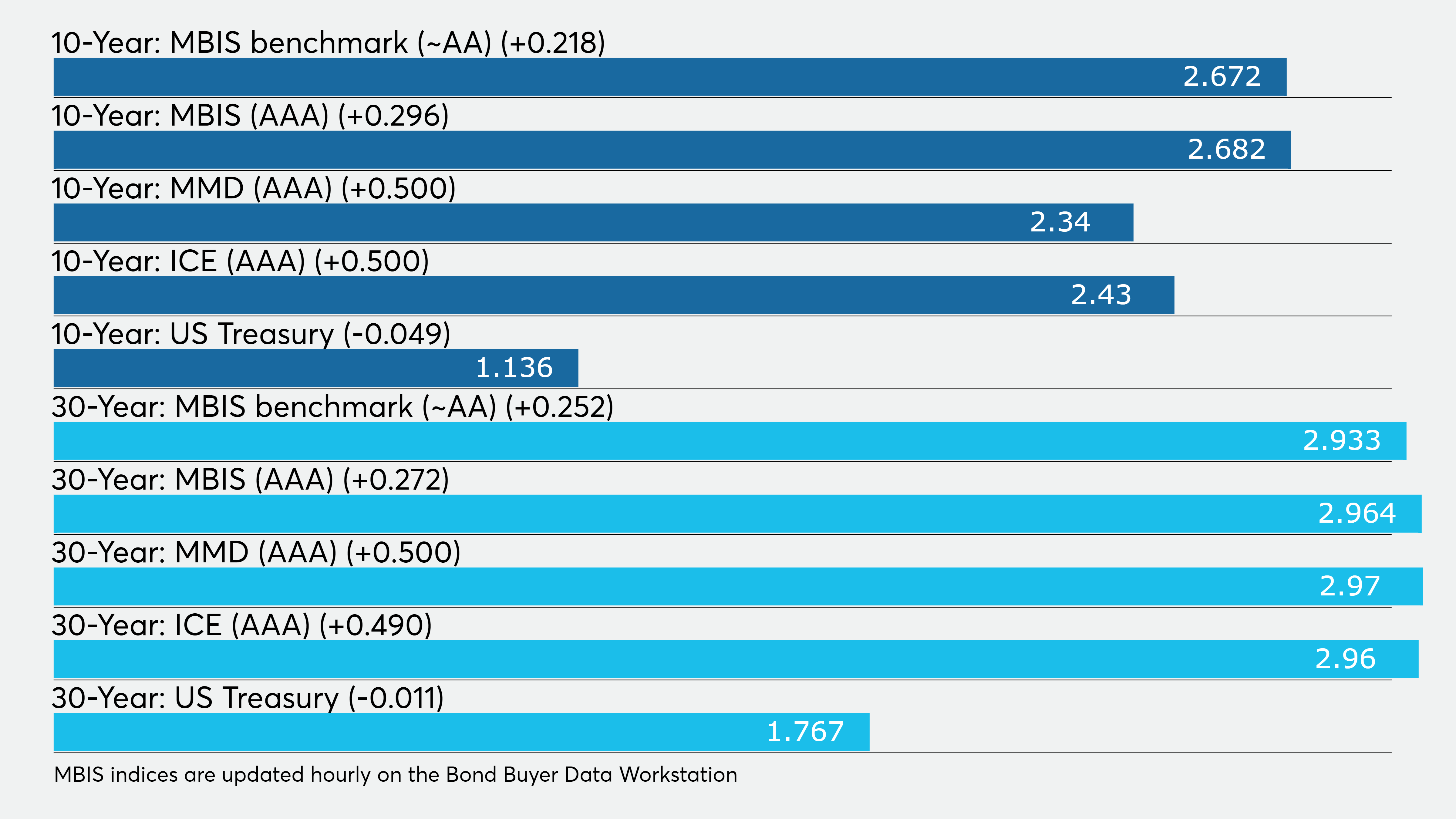 The municipal market sold off again on Friday in dramatic fashion even after the Fed announcement that it would buy munis via collateral by financial institutions, a step aimed at calming the anxiety over the flight of money from tax-exempt money market funds.

The Fed move did lessen the sell off on the short end for a Friday in the muni market — rates on short end were off nearly 80 basis points before the announcement — but the losses are still severe all across the curve.

Depending on which AAA curve a market participant follows, this can be said: The muni market again sold off as much as a half percentage point. The muni one-year is at about 2.95% by some counts. The muni 30-year is at about 3.40%. The one-year U.S. Treasury is at 0.09% and the 30-year lands at 1.46%, at publication.

“In historic times such as are presently occurring the market is being tested with major liquidity pressures,” said Kim Olsan, senior vice president of municipal bond trading at FHN Financial.

“Thursday’s bids wanteds volume as posted to Bloomberg’s MBWD function totaled $4.1 billion—a new high dating back to the inception of the bid page functionality from 1996,” she said.

The market is rambling on, if not stumbling into something uncharted.

“Mutual fund outflows reached $12 billion—three times the previous high. There isn’t much framework to draw on during prior periods, and yet bonds are finding willing buyers,” Olsan said. “Trade data from the MSRB showed secondary, fixed-coupons flows surpassed $13 billion—66% above the prior day.

She said that the makeup of buyers includes entities finding municipal yields not available since 2013 when the Taper Tantrum hit, pushing intermediate yields to 3% and long-end levels into the mid-4% range.

“This is the most stunning reversal I or anyone has ever seen, as every trend that was in place is now gone and it only took nine trading sessions for it all to evaporate,” said Jim Grabovac, investment strategist at Loomis Sayles. “The root cause is uncorrelated to anything happening in the financial markets and to me, one of the most stunning ripple effects is how illiquid the Treasury market is.”

The Fed’s decision Friday to include municipals had mixed reactions because of the nuanced nature of the market and the somewhat mixed signals that decision had for the market.

The move is “to enhance the liquidity and functioning of crucial state and municipal money markets,” according to a statement from the Fed.

“I would not be a strong proponent of that, the way to fix the market is through fiscal policy, state and local government needs grants,” Grabovac said. “It will take longer but it will be more meaningful.”

However, the market was looking to find some support.

“Unfortunately the muni market continues to be under heavy pressure due to liquidations from funds and ETFs which is being felt up and down the yield curve,” said Greg Saulnier, managing analyst at Refinitiv.

As noted, the Lipper reported $12 billion of net inflows far surpassing the previous record of $4.5 billion.

“We were happy to hear the announcement that the Fed was extending its asset purchase program into municipal bonds, but given that it only pertains to bonds with maturities 12 months and shorter, it remains to be seen what kind of impact and support this will provide to the remainder of the market,” Saulnier said.

Grabovac added that economically, the central bank response now is that they have less ammunition and need to take out all stops in trying to provide liquidity to the markets.

“They may need to expand the balance sheet beyond levels at which we are at, in order to keep longer rates in check.”

During this crisis, times are chaotic and market participants can’t help but compare it to the last time there was this much madness and volatility.

“You can’t help but compare it to the financial crisis, with the delinking from muni and Treasury rates,” Grabovac said. “It was so jarring back in 2007 and 2008 and to see it happen again in such a strong fashion, it’s unfathomable.”

He said however, this time it’s different as it will not cured by simply adding more liquidity in the system but it will take a fiscal response that has to be dramatic and long lasting. Also, we are dependent of the healthcare industry to help solve and stave off the virus.

“It was nearly 40 years since MMD has risen 50 BPs in one day and recently we have seen that big of a move or close to it numerous times,” he said. “Ultimately, the market will find its level and investors will be back. There is great value in the market to be had, if you have the ability to hold a position until the market stabilizes.”

He noted that right now, if you are a money manager or portfolio manager and have the perfect flexibility, it could be a great time to operate.

“I have seen some nice blocks trading in secondary this week but market just keep going up in terms of yields. It is prudent to take the temperature of the water and that requires a lot of staying power.”

He also said that he believes the market can’t keep up this pace of decline and that so much of the bid-wanted activity has taken place in the shorter part of the curve, and to meet shareholder redemptions which has put pressure on the curve.

“I don’t think we have had the coupon curve inverted, this is something different and completely and counter poised to the economic situation,” Grabovac said. “Ultimately the selloff is unsustainable and the short end will come back down and the market will get through the turbulent times.”

Secondary Markets
“Rates shot higher in morning, particularly in the front end. Mid-morning, the Fed announced that their recently established commercial paper financing facility would be open to high-quality, short maturity municipal bonds,” ICE said in a market comment. “This action caused a knee-jerk reaction in the front end, but by early afternoon, the effect of the Fed’s announcement wasn’t evident and rates moved higher.

ICE noted that rates have now soared over 200 basis points from the lows earlier this month.

Munis were weaker on Refinitiv Municipal Market Data’s AAA benchmark scale, as the yield on the 10-year muni jumped 45 basis points to 2.79% and the 30-year vaulted 40 basis points to 3.37%.

Stocks were back down in the red on Friday, as Treasury yields were lower still.

Lipper reports greater than $12B of outflows
For the third week in a row, investors pulled cash from the municipal market and this time the sheet size of the outflows was something some market participants have never seen before.

In the week ended March 18, weekly reporting tax-exempt mutual funds suffered $12.214 billion of outflows, after outflows of $1.760 billion in the previous week, according to data released by Refinitiv Lipper late on Thursday. 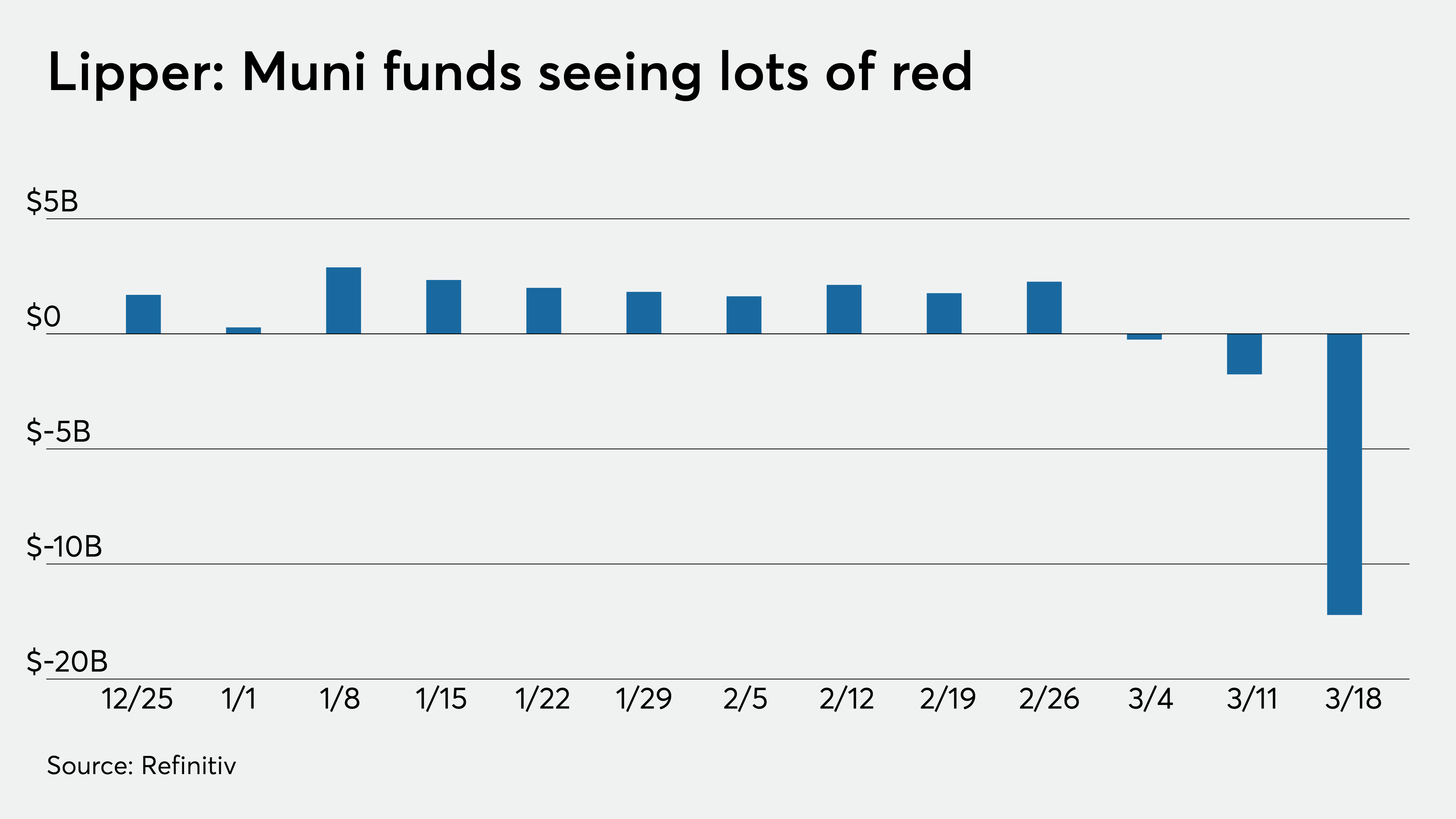 “It is the largest outflow I can remember, everything is stunning right now,” said Grabovac. “That is the best I can describe it.”

The four-week moving average turned negative at $2.989 billion, after being in the green at $505.886 million in the previous week.

Bond Buyer indexes skyrocket
The weekly average yield to maturity of the Bond Buyer Municipal Bond Index, which is based on 40 long-term bond prices, jumped 36 basis points to 3.82% from 3.46% the week before.

Data appearing in this article from Municipal Bond Information Services, including the MBIS municipal bond index, is available on The Bond Buyer Data Workstation.