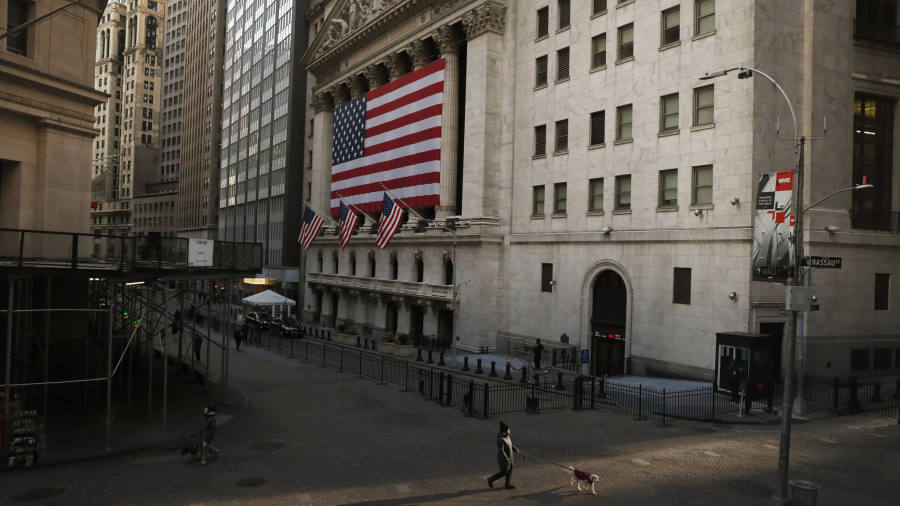 Two weeks ago, traders at TwentyFour Asset Management came into the office after a weekend in which a global oil price war had erupted. The ensuing crash in crude made investors who were in the early stages of fretting about the coronavirus outbreak even more alarmed.

The traders hoped to sell a “modest” holding of 30-year US government bonds — one of the safest, most easily traded financial assets in the world — and asked three of the banks specially tasked with supporting US government debt auctions for prices. Two refused to bid at all. “This was extraordinary, and unprecedented in our experience,” said Mark Holman, chief executive officer at the asset manager, in a note to clients.

The incident reflects the intense strain at the heart of a financial system struggling to cope with an economic shock of huge, but uncertain proportions. The ease of buying and selling even the safest, most high-quality assets has deteriorated dramatically. JPMorgan has dubbed it the “Great Liquidity Crisis”, noting that it has piled extra volatility on to already fragile market conditions.

“This is not a traditional liquidity situation,” said Peter Tchir, head of global macro strategy at Academy Securities. “We are in unprecedented territory.”

At the heart of the problem are the big banks that are central to the business of trading. Up to 2008, they often used their balance sheets to store assets in an effort to facilitate trades between buyers and sellers. But since that crisis, more stringent rules on capital have made banks less willing to act as intermediaries by providing so-called warehousing of risk, instead looking to connect buyers and sellers immediately. Fund managers have complained that this has made it harder to trade.

As turmoil has hit global markets in the coronavirus crisis, a stampede for the exits has made this process even more challenging.

Figures from the Federal Reserve Bank of New York for the week ending on March 11 show that primary dealers — the backbone of the US government bond market — had taken on only a modest increase in their holdings of Treasuries from the previous week. Net holdings of investment-grade corporate bonds, meanwhile, fell to $5.5bn from over $9bn.

“It feels like banks are fighting the last war,” said one trading executive who declined to be identified. “Part of the problem is now they have got liquidity but they’re trying to keep their balance sheets as squeaky clean as they can.”

The debt of oil company ExxonMobil, one of the few highly rated companies able to raise cash in the bond market last week, usually trades with a spread — the difference between the price to buy and the price to sell its bonds — of a quarter of a percentage point, or $2,500 on a $1m trade. By Friday, that rose to about $25,000 for its new 30-year bond.

“A lot of bonds are just not trading now,” said Monica Erickson, a portfolio manager at DoubleLine. “The street is providing very little liquidity”, she said, which makes it hard to figure out assets’ true value. “One bank told me they are full and they can’t take on more risk.”

Analysts say poor liquidity is exacerbated by fully automated, high-speed market-makers. These algorithm-powered traders have smaller balance sheets than banks, and market participants say they tend to post unappealing prices, or even withdraw from the market altogether, when conditions are turbulent.

The problem extends beyond bonds. The average “depth” of the S&P futures market — the number of contracts tied to the US stock index that are available near the best price — has plunged 90 per cent just since mid-February, according to JPMorgan.

In foreign exchange, the average bid-offer spread on major currencies is now three times the average seen over the past six months, according to analysts at Barclays.

All this has helped to fuel peculiar movements in markets. Prices for government bonds — usually a haven in times of stress — have fallen alongside stocks as selling activity has picked up. On some days, higher-quality bonds have dropped by more than riskier, higher-yielding debt as investors find the latter easier to sell.

With so many traders — at banks and elsewhere — working from home to avoid spreading coronavirus, the number of people available to conduct trades has also fallen, hurting liquidity still further.

Central banks’ ongoing efforts to fix the plumbing behind markets can do only so much, analysts said, while investors are focused on the prospect of fiscal stimulus from Congress. “We need a period of low volatility,” said Mr Tchir. “Everyone is on hold until we figure out what Washington DC is going to do.”