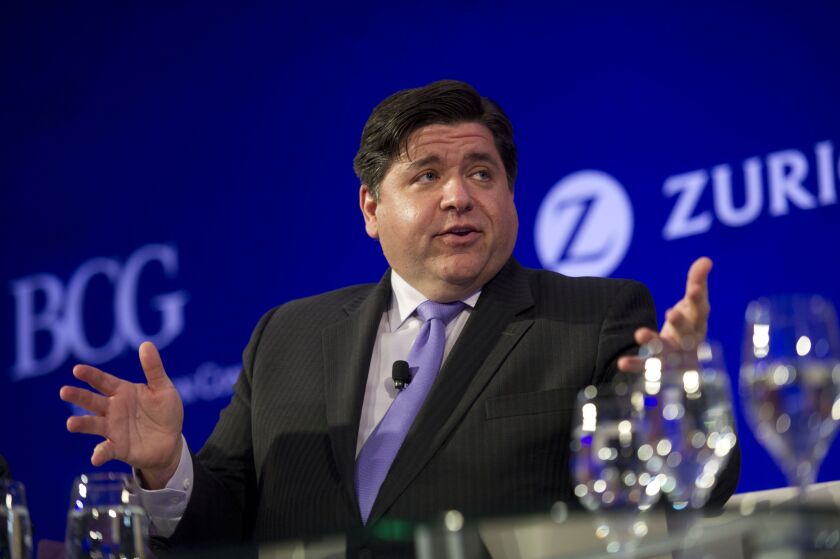 Chicago and Illinois are counting on the federal government to help replenish coffers battered by the response to COVID-19 and loss of tax revenues from shuttered businesses but they have stopped short of putting dollar amounts on what’s needed.

Pritzker said that’s why he’s in daily contact with Illinois members of Congress and other Congressional leaders and spoke with House Speaker Nancy Pelosi, D-Calif., this week to express “what we need here in Illinois from them…what kind of legislation we would hope and expect that they would get passed for us and how we would want it crafted so it benefits Illinois.”

Pritzker on Friday issued a stay-at-home order that runs from Saturday through April 7. Schools also will remain closed through April 8. Illinois number of COVID-19 cases stood at 585 Friday.

Mayor Lori Lightfoot also pressed for federal help for individuals and businesses with unemployment, grants, and loans but governments too. “Localities like Chicago should not be shouldering this burden alone. This is a B-sized problem, meaning something that can only be solved with billions in needed stimulus support from the federal government,” Lightfoot said in a speech about the coronavirus pandemic Thursday.

Governors and congressional Democrats are pressing Senate Republicans to insert provisions to help state and local governments into an evolving stimulus bill that could exceed $1 trillion to address the coronavirus pandemic. The initial draft of the bill released Thursday by Senate Republicans did not include any direct aid to state governments that has been requested by the National Governors Association.

New Jersey, New York, Connecticut and Pennsylvania jointly called on the federal government for $100 billion in direct aid amid a warning that due to dramatically increased spending they would “be forced to make incredibly difficult choices” on jobs, education, transportation and other critical services.

The U.S. Conference of Mayors is asking Congress for $250 billion to deal with effects of the coronavirus including money for public health departments, revenue shortfalls by transit agencies, assistance for school districts and other needs.

Chicago and Illinois are barely scraping by and multiple rating reports and buy side analysts and civic groups have noted how ill-prepared both are to manage through a recession. While investment returns are smoothed the battered stock market also looms large on funded ratios and future payments. The city has a $30 billion pension tab and the state carries a $137 billion tab. The city carries one junk rating and the state has two just one notch above a speculative grade.

State
Pritzker this week gave more than 24,000 bars and restaurants a 30-day reprieve in forwarding sales tax collections but the restaurant association wants it expanded to cover larger establishments. Some Medicaid rules have been loosened and the state’s small businesses are eligible for federal financial hardship loans.

Earlier this month the Governor’s Office of Management and Budget and the Commission on Government Forecasting said they saw no reason for alarm but warned of the risks COVID-19 poses to the estimates. Since then much of the state’s economy has slowed or halted. At the time, the officials said economists were not predicting a recession. The predictions now project negative first and second quarter growth triggering a recession so the revenues face a big revision.

Pritzker is pinning the state’s future budgetary stability on voters passing a constitutional amendment on the November ballot to allow the state to move to a progressive income tax from the current flat rate. It would generate about $1.4 billion for the fiscal 2021 budget before the General Assembly and then an estimated $3.6 billion going forward.

The governor was asked Thursday if it remained wise, economically, to keep the measure on the ballot.

“This is not a time for politics. We have too much to do to save people’s lives,” Pritzker said. “We are not focusing on legislative initiatives other” than those needed to “provide the healthcare and unemployment and the services that people will need in an increasingly difficult moment for everyone.”

Several market participants said the growing economic hit to economically sensitive taxes makes passage all the more important. The proposed rate structure that limits increases to higher earners could prove an easier sell among the middle class in an economic pinch and lessen the worry opponents warn of that the change would open the door to future hikes on them.

City
Lightfoot reiterated in her public address that the city has cash on hand and investments to manage for now and economically sensitive taxes make up less than 25% of the city’s budget. There’s also a fiscal cushion in $100 million in unplanned savings from the city’s January debt refinancing.

Lightfoot also extended the closure of Chicago Public Schools from the state-mandated order to continue through April 20. The city could take that power under “Act of God” days that are not required to be made up and don’t bear on state aid levels dictated by attendance.

Local tax revenues make up about $1.8 billion of the city’s $4.46 billion corporate fund. The budget totals $11.65 billion when all funds are included. Under a negative forecast in the city’s financial forecast released last summer the city faces an up to $1.6 billion gap in 2021 and $1.7 billion hole in 2022.

“The negative outlook presents a picture of City finances under unfavorable economic conditions with low to negative growth in economically sensitive revenues, and expenditures growing at a significantly higher rate” and assumes “a similarly negative outlook for expenditures, in which City spending increases more rapidly over the next three years,” reads the forecast.