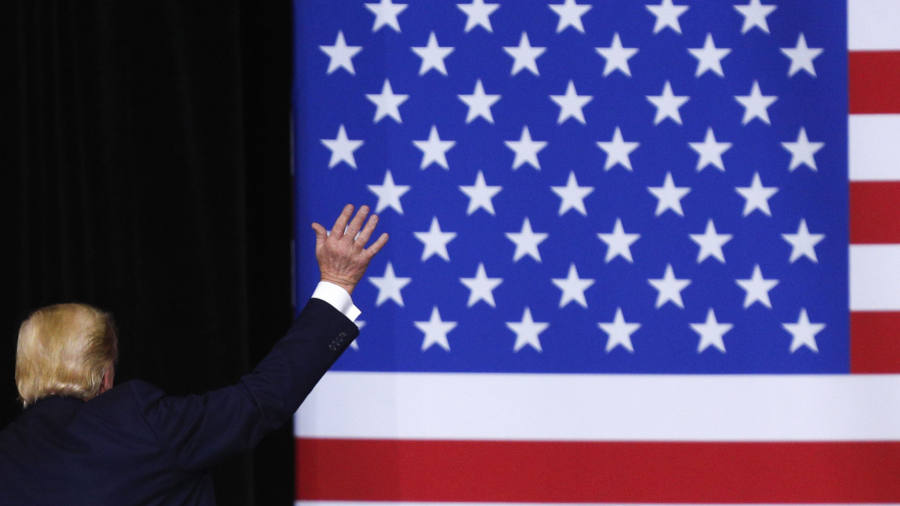 Over almost two weeks of trial, one comment in particular has stood out from the weighty arguments advanced by Donald Trump’s impeachment defence team.

Alan Dershowitz, the Harvard emeritus professor defending the US president, this week presented a view of executive authority virtually unlimited by the threat of removal from office, suggesting that the president could act however he wished in pursuit of re-election.

“If a president does something that he believes will help him get elected, in the public interest, that cannot be the kind of quid pro quo that results in impeachment,” he said on Wednesday.

The remark was roundly condemned by Democrats and surprised legal scholars across the political spectrum. Mr Dershowitz later claimed his words were misconstrued, and other members of the president’s defence team sought to walk back the sweeping statement.

But even as the president heads for seemingly swift and certain acquittal in the Republican-controlled Senate, the comments have raised the spectre that Mr Trump’s impeachment trial could ultimately end up weakening the guardrails around the power of the US presidency.

“Our constitution builds in numerous checks against presidential power, but if the message here is that the president can do what he wants if he thinks it’s in the national interest, that’s a vastly different constitutional system than the one drawn up by the founders of this republic,” said Mark Rozell, dean of the Schar School of Policy and Government at George Mason University.

The impeachment of Mr Trump, like those of previous presidents, has focused attention on the bounds of presidential authority, the ability of Congress to check it and the separation of powers between the three branches of government built into the US constitution.

Mr Trump is accused of illegally withholding military aid to Ukraine granted by Congress, which has constitutional authority over spending. As he held the money back, witnesses testified during earlier House impeachment hearings, Mr Trump demanded that Ukraine’s president announce an investigation into Joe Biden and his son. Mr Biden is a frontrunner to be the Democratic candidate in the 2020 presidential election.

In response, Mr Trump’s legal team has advanced the theory that any inhabitant of the White House had sweeping constitutional authority to tip elections in his favour if he is not committing a crime.

Patrick Philbin, deputy White House counsel, on Thursday called the alleged conduct, on its face, “permissible under the powers of the president” and decried the Democratic theory that it could amount to abuse of power.

“Even if everything you say is true, that is not an impeachable offence,” he said.

Adam Schiff, the Democratic House intelligence chairman who is leading the case against Mr Trump, said Mr Philbin’s position was an invitation for presidents to “abuse all their power all they want”.

“I think our founders would be aghast that anyone would make that argument on the floor of the Senate,” he said.

The view pushed by Mr Trump’s lawyers — that there are few constraints on a president’s power — has been embraced by Mr Trump himself and other members of his administration.

Last year, Mr Trump said that Article II of the US constitution, which grants the president “the executive power”, gave him “the right to do whatever I want as president”.

In November, his attorney-general, William Barr, claimed the American revolutionaries who founded the US did not intend to weaken kingly, executive power, but rather the authority of an “overweening” legislature.

It is not the first time Mr Barr has espoused such views: in the late 1980s and 1990s, he was part of a group of young conservative lawyers who sought to undermine the restraints imposed on the presidency after Richard Nixon resigned in the face of impeachment over the Watergate scandal.

In his November speech, the attorney-general warned of a decades-long “steady grinding down” of presidential authority “that accelerated after Watergate”.

Mr Dershowitz carried on that line of thinking this week, arguing that all presidents believe their own re-elections to be in the public interest, and thus actions designed to secure their re-election could not be grounds for impeachment.

“Dershowitz exonerated Nixon and every president who ever did anything wrong by his logic,” Mr Rozell said.

Mr Dershowitz has insisted his comments have been distorted. In a column in The Hill on Thursday, he said he meant that “helping one’s own re-election effort cannot — by itself — necessarily be deemed corrupt”.

He pointed to the example of Abraham Lincoln, the 16th US president, who in the midst of the US civil war ordered troops to vote in a state election he wanted his party to win.

“He genuinely believed that his party’s victory in Indiana was essential to the war effort, but he also knew it would help him politically,” he wrote.

Jonathan Turley, a legal scholar called by Republicans to testify before the House judiciary committee on impeachment, said he was “profoundly concerned about the implications of the argument” Mr Dershowitz had made.

“Any time a president asks for information against a political rival it raises serious concerns over the abuse of his office,” said Mr Turley. The lesson to be drawn from Lincoln’s example, he argued, was not that the president’s conduct was proper.

Ilya Somin, a law professor at George Mason University, held out hope that the argument most strikingly advanced by Mr Dershowitz would not gain credence with Mr Trump’s acquittal.

“The argument is both stupid and totally unsupported by anything in the constitution,” he said, but added that a majority of senators voting to acquit the president did not necessarily mean they “accepted all the dumb arguments that have been made”.