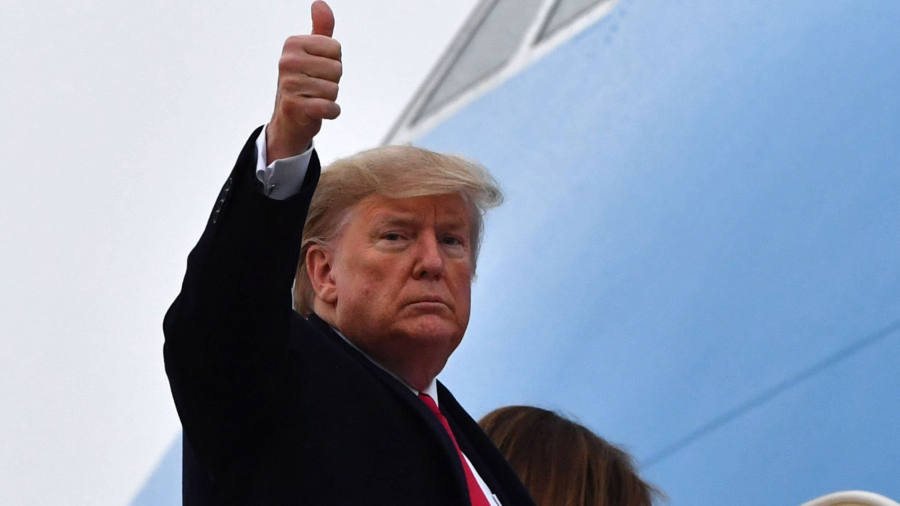 Donald Trump cleared a decisive hurdle on the road to acquittal in his impeachment trial on Friday as Senate Republicans closed ranks in the president’s defence and blocked the testimony of key witnesses in the case to remove him from office.

The Senate voted 51-49 against hearing from witnesses, with all Republicans joining the majority except Mitt Romney of Utah and Susan Collins of Maine. The decision sets the stage for Mr Trump to be formally acquitted in a final vote expected next Wednesday that will lift a huge cloud hanging over his presidency.

While Mr Trump will claim vindication as he heads into his re-election campaign, he will also be assessing the political damage suffered along the way because of the accusations levelled against him by Democratic lawmakers since September.

“[Mr Trump] comes out of this with firmer support in the party than when he started. The Republicans have doubled down and made clear that they and President Trump are one team,” said Julian Zelizer, a professor of political history at Princeton University. “But he doesn’t come out untarnished. Clearly the story that House Democrats told had an effect, and he will carry the baggage of everything that has been revealed”.

Mr Trump faces charges that he abused his power and obstructed Congress by withholding military aid to Ukraine until Kyiv announced an investigation into the family of former vice-president Joe Biden, now a leading candidate for the Democratic presidential nomination.

Following the Senate decision on witnesses, Mr Trump took aim at the investigation in the House of Representatives that led to his impeachment late last year, tweeting: “Democrats = 17 Witnesses. Republicans = 0 Witnesses.”’

Mr Trump’s Senate impeachment trial took a crucial turn in his favour late in the week, when Lamar Alexander of Tennessee and Lisa Murkowski of Alaska, two relatively centrist Republicans, said they opposed calling new witnesses despite concerns about the president’s conduct in dealing with Ukraine.

The Republican support for shielding Mr Trump from further scrutiny tightened the president’s grip on a party that once had many reservations about his fitness for office. Mr Alexander said the president’s conduct was “inappropriate” but not impeachable. Ms Murkowski said she didn’t believe the “continuation” of the trial would change anything.

“It is sad for me to admit that, as an institution, the Congress has failed,” Ms Murkowski said, explaining her vote against considering additional evidence. “We are sadly at a low point of division in this country.”

Mr Trump is only the third US president to face an impeachment trial — and his legal team set forth a broad interpretation of executive power. If the president was acquitted, critics said, the precedent could effectively shift the balance of power in the US government towards the White House, further emboldening Mr Trump.

“If Congress could not stop him from attempts to influence the upcoming election, it’s hard to understand who could,” said Mark Rom, a professor of government and public policy at Georgetown University. “It’s really going to be Trump unleashed.”

The vote on Friday afternoon over witnesses came as Mr Trump headed for his Mar-a-Lago resort in Florida, in preparation for his State of the Union address to Congress next Tuesday. Democrats, meanwhile, are gearing up for Monday’s Iowa caucuses, which will launch the contest to win their party’s presidential nomination.

Democrats had been pushing hard for Republicans to allow the testimony of John Bolton, the former national security adviser who left the White House last year and participated in many of the internal deliberations on Ukraine. Mr Bolton is planning to publish a book later in the year that is expected to offer additional details of Mr Trump’s Ukrainian pressure campaign.

Mitch McConnell, the Republican Senate majority leader, said there was “no need” to “reopen the investigation” since Democrats described their case as “overwhelming” and “beyond any doubt”.

“Senators will now confer among ourselves, with the House managers, and with the president’s counsel to determine next steps as we prepare to conclude the trial in the coming days,” Mr McConnell added.

Chuck Schumer, the top Democrat in the Senate, called the vote to oppose witnesses “a grand tragedy”.

“America will remember this day . . . where the Senate turned away from truth and went along with a sham trial,” Mr Schumer said, adding to his earlier comments that “a trial without truth, without key evidence, without witnesses and documents, would render the president’s acquittal meaningless.”

Democrats, in particular, are hoping that a number of vulnerable Republican senators up for re-election in November could be damaged by their votes to protect Mr Trump, and will be using the outcome of the impeachment vote as a political rallying cry.

“Should more negative material come out [about Mr Trump] the Democrats can say, ‘See, we tried but we were thwarted,” Mr Rom said. “They will be reminding their core constituencies that this is an existential threat to the country, and sitting at home is not an option.”

How Large of a Position Should You Take on When Trading Penny Stocks?
Using Support and Resistance Lines After the First 1% Drop for U.S. Indexes in Four Months – VLOG 2
How To Select a Share for Investment – Part 1