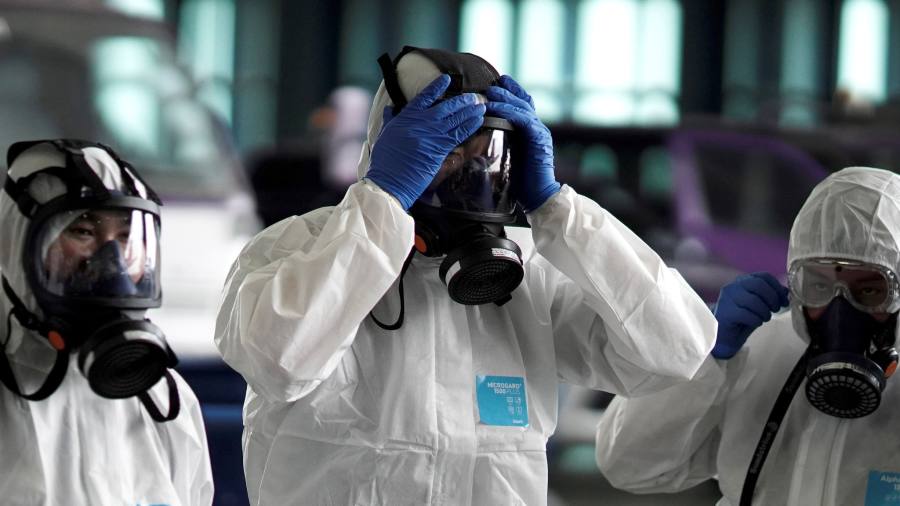 China’s currency weakened past a key level with Asian and European stocks selling off as fresh concerns over the coronavirus outbreak rippled through global markets on Thursday.

The offshore renminbi, which trades in major hubs outside mainland China, dropped below Rmb7 to the US dollar for the first time this year. It has tumbled more than 2 per cent since January 20.

Health authorities said the country has confirmed 7,711 cases of coronavirus. The contagion has spread outside China, with almost 100 cases as far away as the US and Germany.

The World Health Organization will meet in Geneva on Thursday afternoon to decide if the current outbreak constitutes a Public Health Emergency of International Concern and what action will be taken in response.

China’s offshore renminbi slipped 0.4 per cent to Rmb6.9950 per dollar, its weakest level since December as concerns around the outbreak weighed on sentiment.

“Fears over the spread of coronavirus and its likely human and economic impact are rising,” said Richard McGuire, a strategist at Rabobank, who warned that any attempt to quantify the long-term market reaction was “fraught” with difficulty.

Stock markets across Asia fell, led by a nearly 5 per cent fall for Taiwan’s Taiex index as traders returned from holiday. Tech stocks with heavy exposure to China were the hardest hit as Foxconn, the world’s largest contract electronics manufacturer, fell by 10 per cent, its largest one-day drop in 20 years.

Hong Kong’s Hang Seng fell 2.6 per cent, Japan’s Topix index ended the day down 1.5 per cent and the Kospi in South Korea shed 1.6 per cent.

European shares opened 1 per cent lower, with losses across the region’s major bourses from London to Frankfurt. Futures trading was pointing to losses of about 1 per cent on Wall Street.

Assets seen as havens in times of market stress gained. Gold, the Swiss franc and Japanese yen rose while government bonds rallied. Oil prices pulled back with Brent crude down 1 per cent to $59.21 a barrel.

Investors have struggled to price the effects of the outbreak, with Asia bearing the brunt of the negative sentiment and past sell-offs in Europe and the US followed by sharp rebounds. But the impact of the virus is spreading, with airlines suspending routes, tech groups and automakers closing factories and warnings that China’s economic growth could be slashed.

“In a scenario of widespread infection, the virus could materially weaken economic growth and fiscal positions of governments in Asia,” rating agency S&P Global said in a report on Thursday.

Beijing has responded with radical measures to tackle the outbreak, pledging to build hospitals in record time and flying in doctors from across the country.

All 170 known deaths from the virus have been in China, mostly in central Hubei province, where the outbreak began. Around 50m people in the province have been quarantined by a shutdown of rail, road and air links.

By Thursday, the virus had spread to every province in China, including the first confirmed case in politically and geographically isolated Tibet.

Officials, especially those in Hubei, have faced anger over delays in notifying the public about the virus. Hospitals in the province have been overwhelmed and some residents have struggled to access medical care.

On Thursday, China’s Supreme Court took the rare step of criticising Wuhan police for punishing eight people for “rumour-mongering” in the early days of the outbreak after they said that the virus was Sars.

Although the virus is distinct from Sars, the statements were “not a total fabrication” and might have helped spur precautionary measures, court commentator Tang Xinghua wrote, adding that tolerance should be shown.

Wuhan’s police later issued a statement on social media saying that the eight had not been formally detained, only “educated and criticised”.

At least one of the eight was a doctor from Wuhan.

A special committee set up by the Chinese Communist party to handle the outbreak warned on Wednesday that the virus was still spreading. It called for greater prevention measures after one of the country’s leading respiratory disease experts predicted the spread of the disease would peak within one to two weeks.

Some of China’s largest industrial and manufacturing hubs, including Shanghai, Zhejiang, Chongqing and Guangdong, have told non-essential businesses to extend the lunar new year holiday by a week until February 10, sending shockwaves through the global economy.

Amid the continued race to evacuate foreigners from Wuhan, the city at the centre of the outbreak, British nationals who had registered to board an evacuation flight were informed overnight by the Foreign Office that it was delayed. No further details were provided. Matt Hancock, health secretary, said in a tweet that those returning from Wuhan would be “safely isolated for 14 days” without providing more information.

Japan has tested returnees for the virus and plans to allow those who test negative to self-quarantine at home for two weeks. US nationals who landed on a flight from Wuhan at a California military base on Wednesday will be subject to tests but would not be quarantined at the base, officials said.