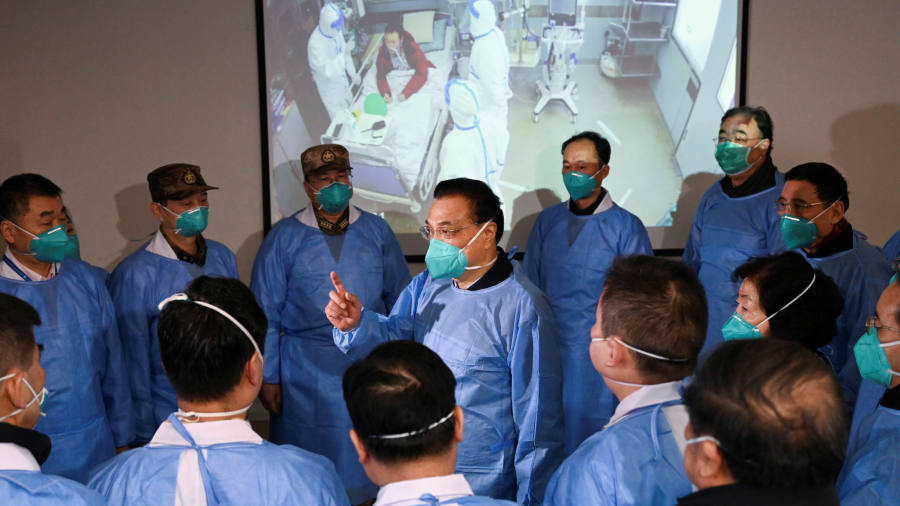 The death toll from the coronavirus outbreak in China rose to more than 100 and the number of people infected jumped by almost half on Tuesday as foreign nationals prepared to evacuate from the quarantined city of Wuhan.

International markets fell further on the expected economic fallout from the crisis after several cities in China extended the lunar new year break that began on Saturday by another week.

Singapore’s FTSE Straits Times dropped 2.6 per cent, Seoul’s Kospi index was down 3.1 per cent while and Tokyo’s Topix fell another 1 per cent following heavy losses on Monday. Mining stocks led Australia’s S&P/ASX 200 lower by 1.5 per cent. Singapore, Seoul and Sydney were closed for public holidays on Monday.

Markets in China remain closed for the week, but analysts expect a sharp drop in Hong Kong when the city’s stock exchange reopens on Wednesday.

The vast majority of the deaths have occurred in Hubei province, where cases were first reported in December. Beijing, the Chinese capital, reported its first casualty on Tuesday.

Confirmed cases of the Sars-like respiratory illness in China rose to 4,459, from fewer than 3,000 on Monday, as the country continued to celebrate the lunar new year holiday that witnesses the world’s largest annual mass movement of people.

Researchers at the University of Hong Kong, however, said the number of infections could be much higher. On Monday, the university estimated that at least 25,630 people in Wuhan were showing symptoms of the disease and around 44,000 were infected with the disease but not yet showing symptoms.

As cases appear in the US and Europe, the outbreak has grabbed the attention of leaders around the world. Foreign governments, fearful of a repeat of the Sars epidemic in 2003 that killed nearly 800 people, are making urgent plans to repatriate their citizens.

The US has urged its citizens to avoid travel to China and is planning an evacuation of its nationals on Tuesday evening. The US flight will leave from Wuhan Tianhe airport at about 10pm, according to an email to passengers seen by the Financial Times.

A group of workers from US manufacturer Corning will be on the flight, alongside diplomats and workers from the Wuhan consulate.

Japan will evacuate about 200 Japanese citizens from the city on Tuesday night, the country’s foreign minister said.

The British health secretary said on Monday that London was “rapidly advancing measures to bring UK nationals back from Hubei province” although no time for such an operation was given.

Tedros Adhanom Ghebreyesus, the director-general of the World Health Organization, said on Twitter on Monday that he was headed to Beijing to meet the country’s leaders. WHO has refrained from declaring the outbreak a Public Health Emergency of International Concern.

A number of foreign companies, such as Microsoft and US agricultural group Cargill, have promised donations for the relief effort.

As the outbreak has intensified in recent days — the number of infected has risen from only 570 on Thursday — the Chinese government has taken unprecedented measures to contain the coronavirus.

An area home to about 40m people in Hubei province has been quarantined and cities and provinces across the country have announced curbs on public transport.

The national new year holiday has been extended by three days nationwide and several cities, such as the financial hub of Shanghai and the manufacturing centre of Suzhou, have said workers cannot return to their posts until the second week of February.

Those measures have prompted concerns that the outbreak would drag down China’s economic growth in the first quarter of the year.

Eswar Prasad, a professor of economics at Cornell University, said: “The Chinese government, and other governments in Asia and elsewhere, face the difficult challenge of taking stringent measures to contain the spread of the virus and getting their populations to take the risks seriously, while mitigating widespread panic that could prove counterproductive in some respects.”

Following heavy criticism of its slow and opaque response to Sars 17 years ago, Chinese leaders, including President Xi Jinping, are under international pressure to handle the crisis in a timely and transparent manner.

Signs of infighting between the central and local governments have already surfaced, with the mayor of Wuhan admitting in an interview with state television on Monday that local authorities had covered up the outbreak. He also offered his resignation.