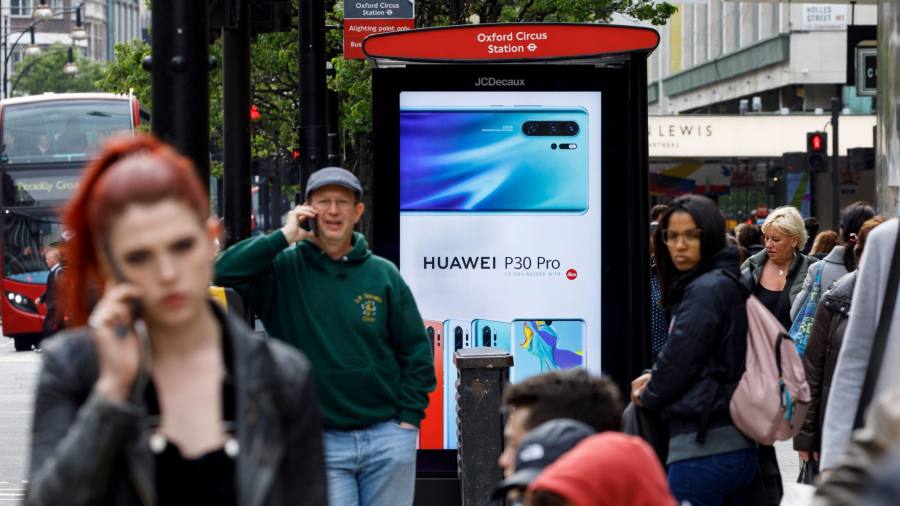 Boris Johnson is expected to approve a restricted role for Huawei in Britain’s 5G network on Tuesday, with ministers looking to impose a new cap on the market share the Chinese telecoms company can take in the UK.

Mr Johnson has been under intense pressure from Washington — including from president Donald Trump last Friday — to ban Huawei from the entire network. The US claims the company poses a security risk and threatens UK-US intelligence sharing.

Mike Pompeo, US secretary of state, wrote on Twitter on Sunday night that the UK had a “momentous decision ahead on 5G”, a sign of continued efforts to persuade London to follow Washington’s lead.

The UK prime minister is now looking at imposing a market share cap on Huawei, according to people close to the discussions, in an attempt to bring other suppliers in and to avoid over-reliance on the Chinese company.

A final decision on Huawei’s future role in the UK will be taken at the National Security Council on Tuesday. Downing Street insisted no final decisions had been taken, but government officials admit that ministers’ options are limited.

Sir Andrew Parker, head of MI5, and the GCHQ, the intelligence-gathering organisation, have advised ministers that any security risks can be managed, provided Huawei’s role is restricted to “non core” parts of Britain’s new mobile network.

One government official said: “Imagine if we decided to throw out Huawei on security grounds, but our own security officials say there isn’t a problem. How would that look if we were taken to judicial review?”

Washington’s lobbying efforts have been stymied by a lack of competition to the Chinese company, with few able to compete on price or range of goods.

Mr Johnson’s government has repeatedly asked the US whether it can provide alternative technology, to no avail. “We have been asking for almost a year, but there has been no answer at all,” said another official.

“Both the UK and US would be keen to work with each other to come up with new workable solutions to make sure we don’t end up here again. But there is nothing ready at the moment.”

Ben Wallace, defence secretary, and Priti Patel, home secretary, are leading the resistance to Huawei, and government insiders insist that the politicians could yet overturn the advice from officials to proceed with caution with the Chinese company.

The NSC will be asked to consider two options: the total ban on Huawei demanded by Mr Trump; or a ban on the company providing “core” services, coupled with a limit on market share.

Non-core equipment refers to the antennas and base stations that sit on masts and rooftops, which are considered less vulnerable than the core servers and systems where customer information is processed.

Telecoms companies have been bracing for months for the introduction of a limit to how much Huawei equipment can be used in a city or region. Mobile phone companies typically source equipment from more than one vendor but build the network in clusters.

That means a single city, such as Manchester, may be dominated by Huawei radio equipment if all the mobile networks — Vodafone, EE, O2 and Three — use Huawei in that region.

The push to impose a market share threshold — considered by Theresa May’s government last year — would require networks to swap out equipment in exchange for Ericsson, Nokia or Samsung kit. That would add cost for the industry rolling out 5G but would be less of a setback than a total ban on using Huawei.

Huawei has consistently said it is a private company and is not subject to Chinese state interference.