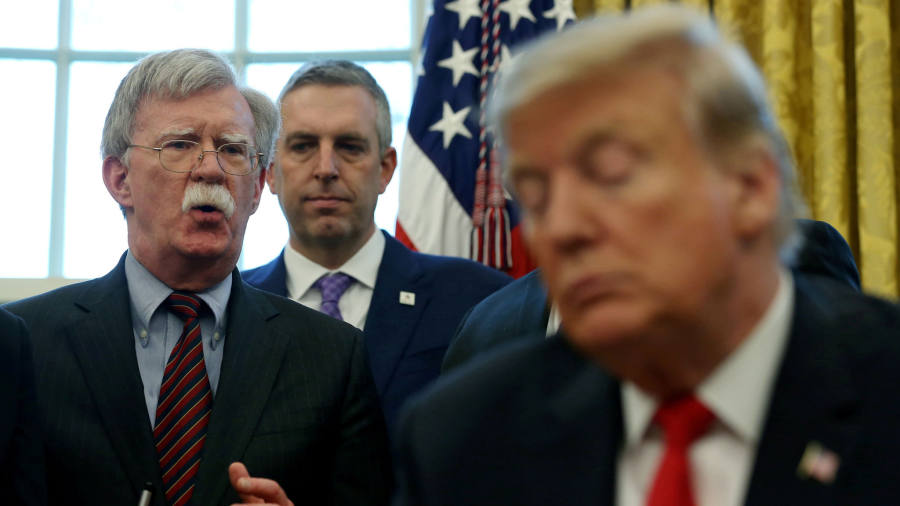 When Democrats push to call witnesses in the Senate impeachment trial of President Donald Trump in the coming days, the top target will be John Bolton, the former national security adviser who compared part of the Ukraine scandal to a “drug deal”.

Mr Bolton has been uncharacteristically reticent since he departed the White House in September after, according to Mr Trump, being fired by the president.

Democrats are keen to hear from Mr Bolton because he has first-hand knowledge of some of the key meetings on Ukraine, but also because he left the White House following a rift with the president. This suggests that he has less incentive to protect Mr Trump than some of the other officials they want to call, particularly Mick Mulvaney, White House chief of staff, who has refused to testify.

“Bolton regularly talked directly to Trump. He should have first-hand knowledge about what Trump directed others to do on his behalf,” said Brendan Boyle, a Democratic congressman from Philadelphia. “His testimony is very important, which is exactly why the White House will do whatever it takes to block him from telling what he knows.”

The calls for Mr Bolton to appear at the Senate trial escalated on Sunday night after the New York Times reported that a draft of a book written by Mr Bolton contained previously undisclosed details that could damage Mr Trump. This included an assertion that the president demanded that military aid to Ukraine be withheld until Kyiv launched investigations into his Democratic political rivals.

Even before details of his memoirs leaked, Democrats’ interest was piqued during the House’s impeachment investigation, particularly testimony given in November by Fiona Hill, his former top National Security Council Russia expert.

Mr Giuliani wanted Ukraine to announce an investigation into Mr Trump’s potential 2020 election rival, former vice-president Joe Biden, and his son Hunter, who served on the board of a Ukrainian company. Mr Trump had made the same request in the July 25 2019 telephone call with Mr Zelensky that sparked the impeachment inquiry.

Ms Hill’s most damaging testimony came when she recited comments by Mr Bolton, who had refused to testify before the House committees conducting the investigation, about elements of the Ukraine scandal.

Ms Hill described how Mr Bolton bristled in a July 2019 meeting when Mr Sondland told visiting Ukrainian officials that Mr Zelensky would not get a coveted Oval Office audience with Mr Trump until he announced the probe. She told lawmakers that Mr Bolton immediately ended the meeting and instructed her to tell the top National Security Council lawyer that he was “not part of whatever drug deal Mulvaney and Sondland are cooking up”.

She also told lawmakers that Mr Bolton had at one point referred to Mr Giuliani as a “hand grenade who’s going to blow everybody up” because of his efforts orchestrating the Ukraine pressure campaign.

As the Democrats pursuing the Ukraine investigation called numerous witnesses before Congress, Mr Bolton made clear that he would resist in court any subpoena to testify. But he reversed course in January, saying he was prepared to testify in the Senate impeachment trial if a subpoena was issued to compel him to appear.

On the first day of the trial, when the senators determined the rules for the proceedings, the Democrats demanded the ability to call witnesses, but were rebuffed by the Republican majority. A few Republican senators suggested they might be willing to allow witnesses, but only in the second phase of the trial due to begin this week.

Some Democrats even floated the idea that they agree to a witness package — they would call Mr Bolton and the Republicans would call Hunter Biden. But that idea was rejected by senior Democrats who said that even entertaining a conspiracy theory involving his father and his own work in Ukraine was a red herring.

Mr Bolton had been an unusual choice for national security adviser. His hawkish views — particularly his call for military action to induce regime change in Iran and North Korea — made him an unlikely foreign policy bedfellow for the president. Mr Trump campaigned in 2016 on a much less muscular foreign policy than Mr Bolton would endorse.

“I actually temper John, which is pretty amazing,” Mr Trump said last year about his aide.

Mr Trump eventually fell out with the Yale-educated lawyer in September, after rifts over Iran, North Korea and Turkey grew increasingly fraught. But Mr Bolton has yet to articulate his insights into the Ukraine affair in public.

A former US ambassador to the UN, Mr Bolton is viewed as a consummate bureaucratic infighter, who during the George W Bush administration strove to direct policy towards his own political ends. His reputation followed him into the Trump administration. In 2018, Jim Mattis, then defence secretary, offered an unusual greeting to Mr Bolton when he welcomed him to the Pentagon for the first time after the security adviser started in his job.

“I have heard that you are actually the devil incarnate and I wanted to meet you,” Mr Mattis joked.

If the Democrats are successful in convincing the Republicans — who have a 53-47 majority in the Senate — to allow witnesses, Mr Trump will he hoping that Mr Bolton leaves that reputation at the door of the Senate chamber.