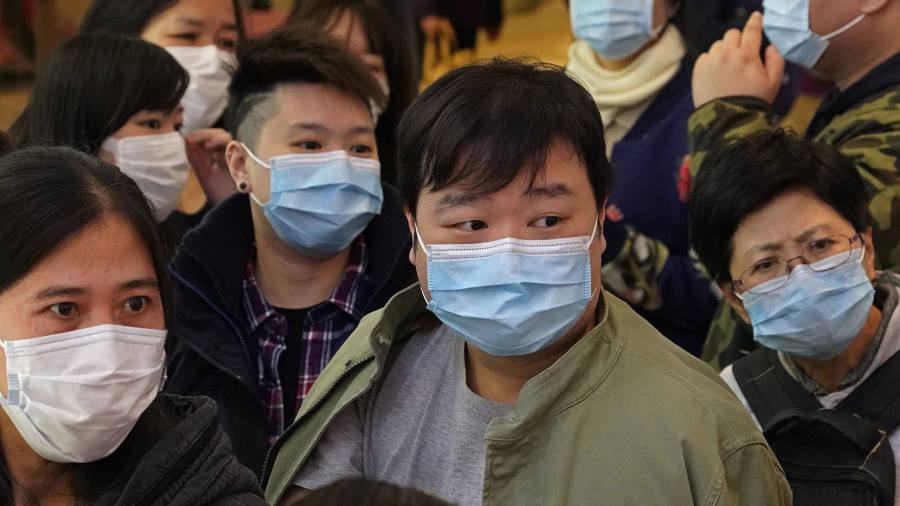 Global equity markets fell and oil prices slumped on mounting concern about the coronavirus after China warned its spread would accelerate, amplifying worries about the deadly disease’s potential to undercut economic growth.

In the US the S&P 500 index was down 1.4 per in early afternoon trading in New York while the UK’s FTSE 100 closed down 2.3 per cent, as did the European composite Stoxx 600. Markets in China and Hong Kong were shut for the lunar new year.

Investors and China’s leaders are braced for a blow to first-quarter domestic growth as the virus weighs on consumer spending and travel during the lunar new year holiday and threatens to hit manufacturing.

Chinese state media reported on Monday that 81 people had died while 2,844 were infected. The mayor of Wuhan has said the number of coronavirus cases in the city could rise by another 1,000. The escalating public health crisis prompted the government to extend the lunar new year holiday until next week in an effort to contain the outbreak.

Lee Hardman, a currency analyst at Japanese bank MUFG, said the virus marked “a setback for the global economy and manufacturing sector, which had been showing tentative signs of improvement in recent months”.

International banks, which have been expanding aggressively into China in recent years, have been keeping potentially exposed employees at a distance. Credit Suisse has sent its staff in Hong Kong a memo instructing them to stay away from its regional headquarters if they have visited mainland China in the last 14 days. Affected employees will be required to remain at home for at least two weeks.

Shanghai, China’s financial capital, has ordered companies not to reopen until February 9, while the manufacturing hub of Suzhou has postponed the return to work of millions of migrant labourers for up to a week. Suzhou is home to factories owned by companies such as iPhone contractor Foxconn, Johnson & Johnson and Samsung Electronics.

Underscoring concern among policymakers over the economic fallout from the outbreak, China’s banking and insurance regulator announced moves to help businesses affected by the crisis.

In a televised interview with CCTV, China’s state broadcaster, Zhou Xianwang, Wuhan’s mayor, acknowledged the government’s failings in handling the crisis. “We need to improve the ability to address public health events …and manage emergencies,” he said.

The mayor also admitted local authorities had covered up the disease by “not making a timely disclosure”. But he said Beijing was in part responsible for the cover-up.

“Please understand why we did not make a timely disclosure of the virus. This is an infectious disease and must be disclosed according to law. Local governments can not disclose the disease until it gets authorisation to do so,” he said.

Andrew Milligan, head of global strategy at Aberdeen Standard Investments, said: “Even on the assumption that the authorities do get on top of this outbreak there will be some short-term economic shock”. But he added: “That is a long way from saying the outlook for global markets will be materially different. It’s still early days.”

The coronavirus outbreak comes as China’s economy is already growing at its lowest rate in nearly 30 years. In 2019, the economy grew just 6.1 per cent. As the US-China trade war has hit exports, consumption — which is now threatened by the outbreak — has become a far more important source of growth.

“Everything depends on how rapidly it spreads and how serious it gets, but in principle this could have a serious impact on consumption,” said Michael Pettis, a finance professor at Peking University and senior fellow at Carnegie-Tsinghua Center. “People are not going out to restaurants and bars.”

In European equity markets, the composite Stoxx 600 index fell 2.1 per cent and shares in the travel, luxury goods and mining sectors tumbled. London’s FTSE 100 index slid 2.3 per cent, while Germany’s Dax was 2.5 per cent lower.

British Airways owner IAG’s share price dropped sharply along with other airlines. British fashion label Burberry, which is heavily exposed to the Chinese market, was one of the biggest luxury victims, slipping 4.8 per cent.

Japan’s Topix, one of the only major regional stock indices trading on Monday, fell 1.6 per cent. Brent crude, the international benchmark, fell 2.5 per cent to $59.14 a barrel, having earlier fallen more than 3 per cent to its lowest level in almost three months.

Investors piled into haven assets, with gold rising 0.8 per cent to $1,583 per troy ounce. The benchmark 10-year US Treasury yield, which moves in the opposite direction to prices, fell 6 basis points to 1.62 per cent, its lowest level since October.