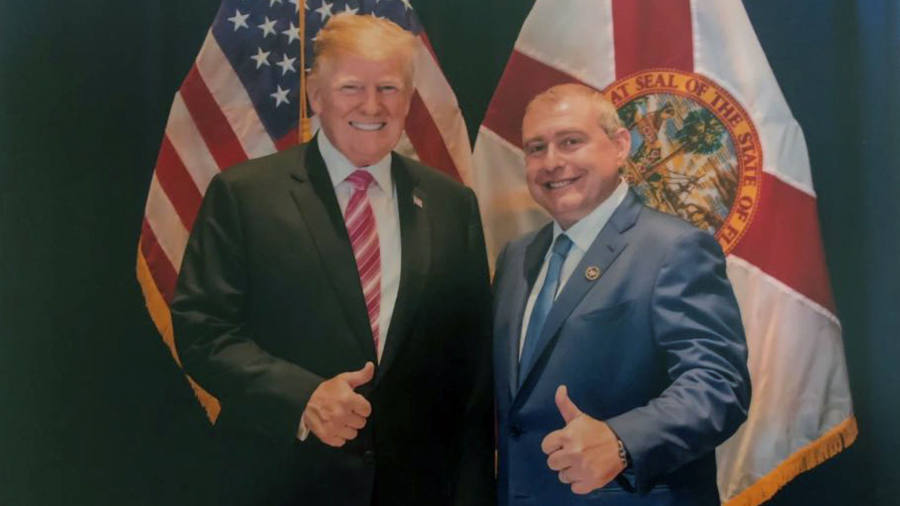 Lev Parnas’ decision to turn on Donald Trump in a pair of blockbuster interviews made for riveting television and may yet influence the impeachment trial threatening the president.

Speaking to Rachel Maddow last week on news channel MSNBC, Mr Parnas insisted Mr Trump “knew exactly what was going on” with a campaign to pressure the Ukrainian government to dig up dirt on the president’s political rival, Joe Biden.

But in legal terms, Mr Parnas’ media blitz amounted to an unorthodox and high-stakes gamble.

The south Florida businessman is fighting criminal charges stemming from hundreds of thousands of dollars in donations he made to Trump-aligned campaign groups.

By going public with his story, Mr Parnas has violated a cardinal rule of defence lawyers: keep quiet — then approach prosecutors in private to negotiate a co-operation deal in exchange for leniency.

“I don’t understand it,” said Roland Riopelle, a white-collar defence lawyer in New York. “Going to the press with your client who is charged in a criminal case is an extremely unusual strategy to adopt, and I’m not sure what this will achieve for Mr Parnas.”

Mr Parnas’ very public campaign appears to have borne less fruit than he might have hoped. Although Democrats have wielded the salacious texts and emails he has provided, his name was not among those Senator Chuck Schumer sought to subpoena at the start of Mr Trump’s impeachment trial. Instead, the Democrats have targeted members of Mr Trump’s inner circle.

Mr Parnas’ attorney, Joseph Bondy, is well aware that he is bucking convention. Doing so, he argued, was the only option in a unique case in which his client’s fate may be entwined with the impeachment of the president.

“You don’t bring an old box of tools to this case,” Mr Bondy told the Financial Times, adding: “Orthodoxy would get me nowhere.”

Mr Bondy is a native New Yorker and veteran criminal defence lawyer with several high-profile cases under his belt. Among others, he represented Peter Gotti, the brother of late mafia boss John Gotti, and Louis Eppolito, a policeman moonlighting as a hitman whose case convulsed the city.

Mr Bondy’s passion, though, is cannabis. For more than 20 years he has campaigned for its legalisation, arguing that drug laws have taken a brutal toll on communities of colour. He broadcasts his views on a regular radio show.

“He’s not your average lawyer,” said Jake Plowden, founder of the Cannabis Cultural Association, who described a “unifying of souls” after he met Mr Bondy five years ago and they discussed cannabis policy. “He was trying to understand my plight as a young black man.”

Mr Bondy views the defence of Mr Parnas, who has a string of debts and failed ventures behind him, as another worthy cause. “The most profound impact Lev could have is what he is doing now,” Mr Bondy said. “I have great faith in my client — what he’s saying and his honesty.”

Mr Parnas first closed ranks after his arrest in October at Dulles airport in Washington, when he was holding a one-way ticket out of the country. He and an associate, Igor Fruman, were accused of creating a shell company to hide the foreign source of their campaign contributions. Those monies helped smooth their entry into Mr Trump’s universe, yielding grinning photos with the president and invitations to his private Mar-a-Lago club in Palm Beach, Florida.

Mr Parnas’ then attorney, John Dowd — who had represented Mr Trump in the special counsel’s investigation into Russian meddling in the 2016 election — let it be known that his client would not co-operate with the impeachment inquiry.

But Mr Parnas had second thoughts, perhaps after Mr Trump claimed not to even know him. He hired Mr Bondy, announcing through his new attorney that he would co-operate. “I think he began to understand that he was going to be left holding the bag,” Mr Bondy explained.

The public strategy was set in motion after prosecutors at the US attorney’s office for the southern district of New York rebuffed repeated attempts to co-operate, he claimed. The US attorney’s office, which has previously said it is considering additional charges against Mr Parnas, declined to comment.

One thing that can complicate co-operation deals: prosecutors invariably require defendants to confess under oath to any and all criminal activity of which they are aware. “That may not be a door he wants to open,” Michael Bachner, another criminal defence lawyer, said of Mr Parnas.

The goal now is to whip up sufficient public interest in Mr Parnas that he is called to testify before Congress, which could reward him by granting immunity from prosecution. At the least, Mr Bondy is hopeful that a judge will be impressed by Mr Parnas’ determination to tell the truth, with or without a deal from prosecutors.

“I have never had to do this,” Mr Bondy said. “The southern district’s door has always been open, until now.”

On the face of it, Mr Parnas’ claims are explosive and would seem to be of keen interest to the senators deliberating Mr Trump’s fate. They are the first to come from someone with direct involvement in the Ukraine campaign, and they establish a link to Rudy Giuliani, Mr Trump’s personal lawyer, and the White House.

“I wouldn’t do anything without the consent of Rudy Giuliani or the president,” Mr Parnas told MSNBC.

The interviews coincided with the release of a batch of documents Mr Parnas had handed over to the House judiciary committee. Among them was a handwritten note on Ritz-Carlton stationery in which Mr Parnas implored himself to get Ukraine’s president “to announce that the Biden case will be investigated”.

Mr Bondy has sought to amplify the message through Twitter, posting a succession of pictures and videos of his client grinning alongside Mr Trump and other Republican luminaries with the hashtags #LetLevSpeak and #LevIsEverywhere. So far, they have garnered nearly 5m views.

Still, there are doubts about how much value Mr Parnas has as a potential witness. Mr Trump and others have roundly rejected his claims. The president’s allies have portrayed him as an indicted criminal desperate to save himself by any means.

By airing his claims, Mr Parnas has likely diminished their value to prosecutors. Potential defendants will now be tipped off, and can prepare to counter them.

“It didn’t seem to help him, did it?” Mr Riopelle said.