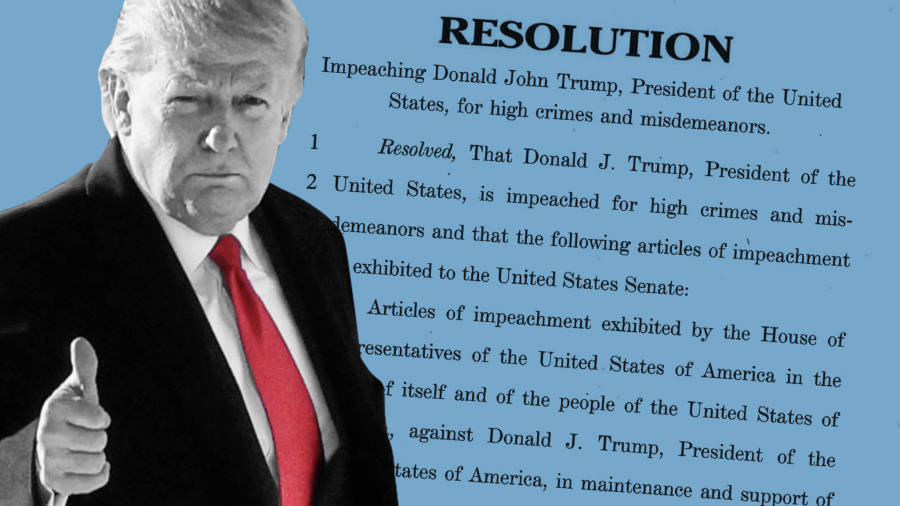 Senate Republicans bent but did not break on the first day of Donald Trump’s impeachment trial, as they voted along party lines to reject repeated Democratic efforts to subpoena documents and witnesses in the case against the president.

During a marathon session that began at 1pm Tuesday, Mitch McConnell, the Republican Senate majority leader, demonstrated his ability to keep his 53-member caucus in line as they defended the third US president to face an impeachment trial.

But it was not easy. Mr McConnell began the proceedings by backtracking on the rules that he had proposed for the trial on Monday night after they produced Democratic outrage and some unease among a small group of more moderate Republicans who are being watched closely for signs they might break from their party.

At the same time, Democrats worked to build a public case that Senate Republicans were themselves taking part in a cover-up led by Mr Trump, who is accused of pressuring his Ukrainian counterpart to investigate his political rival Joe Biden and debunked allegations that Ukraine interfered in the 2016 US election.

Here are the highlights:

On Monday, Mr McConnell circulated draft rules for the trial that called for 24 hours of opening arguments to be crammed into two days, virtually guaranteeing that much of the action would take place late at night when most Americans are asleep.

Another part of the plan would have required Senate votes to consider any of the evidence uncovered by the House of Representatives before it approved articles of impeachment accusing Mr Trump of abuse of power and obstruction of Congress.

Chuck Schumer, the Democratic Senate leader, called the plan “nothing short of a national disgrace”, saying Mr McConnell was “hell-bent on making it much more difficult to get witnesses and documents and intent on rushing the trial through”.

The Kentucky Republican at first held firm. But he was forced to reverse course just before the trial started when Susan Collins, a Maine Republican who faces a tough re-election race this year, expressed concern that the rules deviated too much from the model used for the impeachment trial of Bill Clinton in 1999.

Mr McConnell agreed to allow opening arguments by each side over three days and to accept the House evidence — an embarrassing setback for the wily Republican who had boasted he had enough votes in the Senate, where the Republicans have a 53-47 majority, to pass the rules over the objections of Democrats.

The loss also suggested that Mr McConnell might face difficulty preventing the four Republican defections that Democrats need to call witnesses or seek additional evidence. This will become particularly important after opening arguments are over.

Mr Schumer introduced four amendments seeking documents from the White House, state department, Pentagon and Office of Management and Budget, and another that would force the White House to provide documents related to any new evidence that defence lawyers introduced during the trial. All were rejected on party-line 53-47 votes.

As the trial entered its 13th hour in the early hours of Wednesday, and after Republicans had voted down eight amendments, Mr Schumer introduced a ninth amendment. The new amendment would require senators to vote in the second stage of the trial on whether to call witnesses to testify.

While Republicans blocked the first eight efforts, there were some signs that a few GOP senators might side with the Democrats during the second phase of the trial.

The president was uncharacteristically quiet during the first day of the trial.

Mr Trump spent Tuesday at the World Economic Forum in Davos, Switzerland, from where he fired off only one terse tweet about the trial. It said “read the transcripts!” — a reference to his July 25, 2019 telephone call with Volodymyr Zelensky, Ukrainian president, which sparked the impeachment inquiry.

In brief comments to reporters at Davos, Mr Trump described the Ukraine investigation as a “hoax”.

McConnell may still get his quick trial

The vote to spread opening arguments by each side over three days has already extended the expected length of the trial. But it is impossible to gauge how long the proceedings will last until the Senate votes next week on whether to call witnesses.

If the Republicans successfully block efforts to call witnesses, it is possible that the trial could conclude before the end of the next week, just days before Iowa holds its Democratic caucuses on February 3.