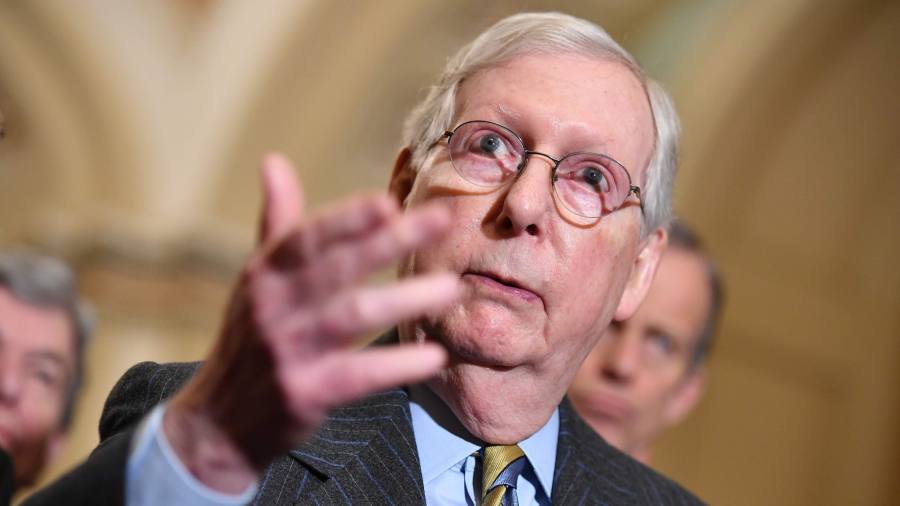 Mitch McConnell, the Senate Republican leader, sparked outrage among Democrats by laying out rules for Donald Trump’s impeachment trial that would raise the bar for the introduction of evidence and could lead to marathon late-night sessions lasting well past many American bedtimes.

Mr McConnell’s resolution, circulated late on Monday, is expected to receive the approval of the majority of senators in the Republican-controlled Senate on Tuesday, when Mr Trump’s trial will begin in earnest. Mr McConnell said this month he “had the votes” to proceed without the co-operation of Democrats.

The Senate last week received the articles of impeachment from the House of Representatives charging Mr Trump with abuse of power and obstruction of Congress. The president is accused of pressuring his Ukrainian counterpart to announce investigations into Joe Biden, his political rival, and debunking theories that Kyiv interfered in the 2016 US presidential election.

Mr McConnell’s resolution grants House Democrats, who will act as prosecutors, and Mr Trump’s defence team 24 hours each to make their arguments. But it requires them to use their time in a two-day period, with the first session starting at 1pm Wednesday — meaning the trial could extend into the dead of night, limiting the number of Americans who could follow the proceedings.

Despite demands from Democrats for the trial to include the calling of witnesses and the admission of fresh evidence not included in the House impeachment probe, Mr McConnell’s resolution sets up a Senate vote, by simple majority, on whether to admit witnesses or evidence only after the opening statements and a 16-hour period for senators to question both the president’s counsel and House Democrats.

Mr McConnell’s resolution stipulates that if the Senate votes to hear witnesses, those testifying will first give closed-door depositions, and the Senate “shall decide after deposition which witnesses shall testify”.

In addition, Senate votes would be required before consideration of any evidence collected by the House impeachment inquiry.

Chuck Schumer, the Senate’s Democratic leader, called Mr McConnell’s resolution “nothing short of a national disgrace”, saying the Republican is “hell-bent on making it much more difficult to get witnesses and documents and intent on rushing the trial through”.

Mr Schumer has called for testimony from former national security adviser John Bolton and acting White House chief of staff Mick Mulvaney, among others, after the Trump administration told them not to co-operate with the House impeachment inquiry.

Mr Schumer said Mr McConnell’s rules were “designed to prevent the Senate and the American people from learning the full truth about President Trump’s actions that warranted his impeachment”, adding: “The McConnell rules don’t even allow the simple, basic step of admitting the House record into evidence at the trial.”

Mr Trump will not be in Washington when his trial begins. He left the US Monday night en route to Davos, Switzerland, where he is due to give a speech at the World Economic Forum on Tuesday and meet one-on-one with world leaders, including Barham Salih, president of Iraq, and Imran Khan, prime minister of Pakistan.

Earlier on Monday, Mr Trump’s lawyers laid out his defence in a 171-page legal brief arguing the president did nothing wrong and that allegations of abuse of power were a “novel theory” that did not support his removal from office”.

A White House statement named eight congressmen who would serve as part of Mr Trump’s team “to combat this hyper-partisan and baseless impeachment” including Jim Jordan and Mark Meadows.

One senior Republican leadership aide said Mr McConnell’s proposal for Senate votes on House evidence was “important” because the president had been “denied due process throughout the 12 weeks of partisan House proceedings”. While an impeachment trial is distinct from a criminal legal proceeding, Mr Trump’s lawyers have repeatedly argued that their client was “denied due process” in the House probe.

Mr Schumer vowed to offer amendments to the resolution when it is introduced, saying: “Under this resolution, Senator McConnell is saying he doesn’t want to hear any of the existing evidence, and he doesn’t want to hear any new evidence. A trial where no evidence — no existing record, no witnesses, no documents — isn’t a trial at all — it’s a cover up, and the American people will see it for exactly what it is.”

Mr Trump is expected to be acquitted in the Senate, as his removal from office would require 20 Republican senators to vote against him.

Last week, John Roberts, the chief justice of the US Supreme Court who will preside over the impeachment trial, swore in 99 members of the upper chamber who will act as jurors. One senator, who was absent last week due to a medical emergency, will be sworn in on Tuesday.