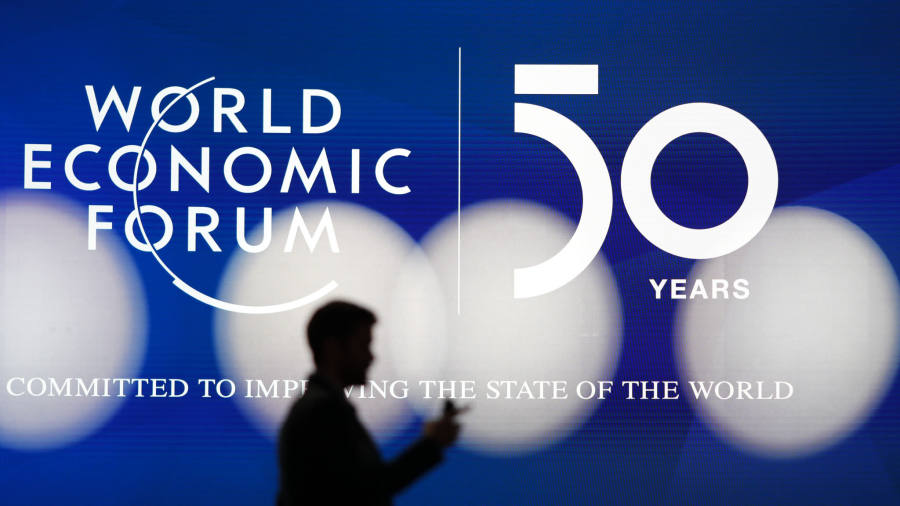 World leaders, chief executives, thinkers and celebrities are gathering in the Swiss mountain town of Davos for the World Economic Forum’s annual meeting.

The event, which begins on Tuesday, has earned a reputation for high-altitude pontificating as the global elite gather to pitch their takes on topics picked by WEF founder Klaus Schwab, from deglobalisation to the fourth industrial revolution.

This year, as the WEF marks its 50th anniversary, a new urgency hangs over the Alpine town. The prospects for trade and global economic growth, tech companies (feted at previous meetings but now in regulators’ sights), the future of multilateralism and the geopolitical order all face growing challenges.

Adding to attendees’ sense of pressure and self-doubt is a multi-faceted environmental crisis which this year occupies all five of the top slots in the WEF’s annual report on the greatest risks facing the world — for the first time.

Here are five key subjects that are likely to occupy delegates’ attention at Davos 2020.

A partial government shutdown kept Donald Trump at home last year, but in 2018 the US president used his Davos speech to strike a combative note on trade — an early sign of the tensions that were to come.

Given that he signed the first phase of his renegotiated deal with China last week, Mr Trump is expected to take a softer tone at this year’s event. Last week he said: “We want those business leaders [in Davos] all to come to the United States.”

But Mr Trump will be closely watched for any geopolitical manoeuvres — his recent decision authorising the killing of Iranian military commander Qassem Soleimani in Iraq has heightened instability across the Middle East.

Davos will be the first time that world leaders, including Germany’s Angela Merkel and Spain’s Pedro Sánchez, have a chance to meet face-to-face to discuss the developments. But some are staying away: France’s Emmanuel Macron and Canada’s Justin Trudeau will not attend, while the UK is sending chancellor Sajid Javid, as Prime Minister Boris Johnson stays at home.

Mr Trump’s appearance on the world stage will be a notable contrast with what is going on back home in Washington — opening arguments in his impeachment trial are expected to begin in the Senate on Tuesday, shortly after his Davos speech.

Although Mr Trump has eased off on the trade rhetoric, the tensions his administration triggered leave lingering questions about the prospects for global growth.

The IMF cited “trade barriers” as a key reason for cutting its economic expansion forecasts last autumn, and could lower its outlook further in its latest outlook, to be published on Monday.

Earlier this month the World Bank downgraded its global growth forecast for 2020 by 0.2 percentage points to 2.5 per cent, warning that the easing of trade tensions between the US and China is unlikely to deliver a rapid economic improvement.

That leaves Davos attendees to grapple with the question of whether fresh stimulus efforts are needed — and, if so, who should be responsible: governments, or central banks?

Will companies match pledges with substance?

The theme for this year’s meeting — “stakeholders for a cohesive and sustainable world” — reflects the number of chief executives who have pledged to start paying as much attention to employees, customers and the environment as to their shareholders.

Last year’s Business Roundtable letter, signed by 181 US chief executives, became a symbol of the shift away from shareholder primacy. Mr Lipton called for such rhetoric to be matched by action, especially from large investors, following a lead set by BlackRock’s sweeping changes last week.

The Big Four accounting firms will launch an initiative to standardise how companies report their contributions to the UN’s sustainable development goals.

But for climate campaigner Greta Thunberg — who will be attending — the Davos-going classes are in her crosshairs. Ms Thunberg will demand that business and political leaders halt investments in fossil fuel exploration and extraction, end fossil fuel subsidies and divest from fossil fuels.

At a rally on Friday, she warned those in power: “You haven’t seen anything yet.”

Can Big Tech be a force for good?

From digital privacy to taxes, there is much at stake for the tech executives who are descending on Davos, Mr Schwab told the FT last week.

Satya Nadella, who pledged last week that Microsoft would be “carbon negative” within a decade, Google’s Sundar Pichai and Huawei’s Ren Zhengfei will all address the forum.

Facebook chief operating officer Sheryl Sandberg will host journalists and publishers in a “Facebook Space” set up to persuade them that the company, which is under pressure from Brussels to Washington, can increase economic opportunity and “bring the world closer together”.

Its challenge was illustrated by a recent report from media monitoring group Media Tenor, which found that the technology sector is now seen by the press “with the same scepticism as the tobacco or finance industry”.

After years of mocking headlines about the fuel-hungry private jets that ship in delegates to wring their hands over climate change, the WEF has this year encouraged participants to use low-carbon transport options such as the train.

It is also offering shoe grips to encourage them to walk the snowy promenade between meetings rather than take cars.

The effort to be sustainable extends to advising caterers not to serve luxuries such as foie gras and caviar, and one day of the meeting has been set aside for “vegetarian menus and the discovery of alternative protein sources”.

This year’s events — including the launch of an initiative to plant 1tn trees in the next decade — will take place in rooms decorated with seaweed-based paint and carpets made from “end-of life fishing nets”. The scores of companies hosting their own events have been asked to consider offering local wines and “mountain herbal infusions” instead of imported drinks.