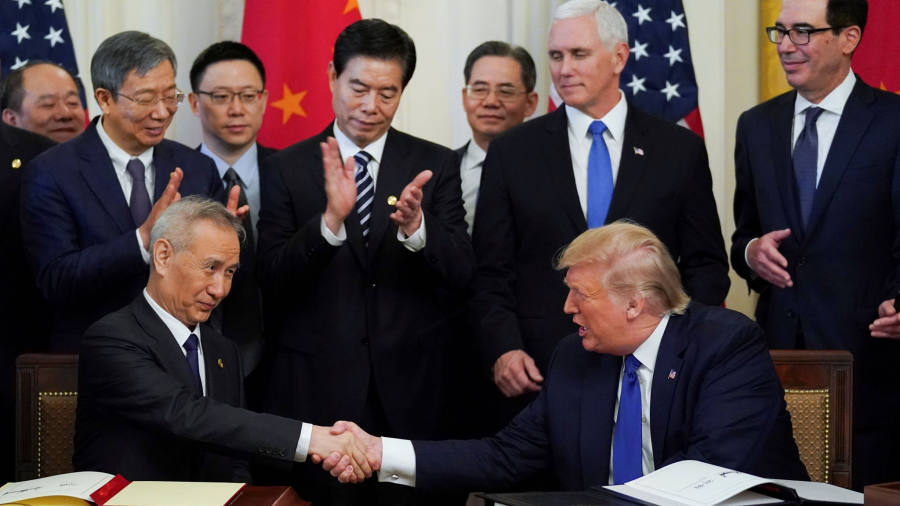 The US and China have signed an agreement to pause the trade war that has weighed on the global economy for nearly two years, while leaving in place tariffs on hundreds of billions of dollars of Chinese imports.

The so-called phase one deal signed at the White House on Wednesday offers some relief following the anxiety in global markets and uncertainty for business that marked the lengthy period of economic conflict between Washington and Beijing.

The 86-page English-language text contains eight chapters, ranging from stricter rules on intellectual property in China to a pledge by Beijing to purchase at least $200bn in US goods and services over the next two years, as well as a commitment by China not to manipulate its currency.

However, the deal signed on Wednesday is limited in scope and does not address some of the biggest sources of tension between the countries, including commercial cybertheft in China and Beijing’s rampant use of industrial subsidies.

The deal leaves the vast bulk of US tariffs on $360bn of Chinese goods in place while avoiding the threat of further escalation for now. However, it includes an enforcement mechanism by which the US could move back to imposing levies if it deems that China is violating its commitments.

“The agreement will work if China wants it to work,” Robert Lighthizer, the US trade representative, told reporters on Wednesday. “The people in China I’m dealing with want it to work.”

Donald Trump, US president, called it a “momentous” step as he presided over the signing ceremony that included longtime allies in US business such as Hank Greenberg, the former chairman of AIG, casino owner Sheldon Adelson, and Stephen Schwarzman, the chief executive of Blackstone. Also in attendance was Henry Kissinger, the former US secretary of state.

“Together we are writing the wrongs of the past and delivering a future of economic justice and security for American workers, farmers and families,” Mr Trump said.

Mr Liu read a message from Xi Jinping, in which the Chinese president said the agreement was “good for China, for the US and for the whole world” and showed the two countries had the “ability to act on the basis of equality and mutual respect”.

But Mr Xi hinted that he expected the US to take a more benign view of China, at a time when Washington is tightening rules on foreign investment, imposing new export controls, pressuring allies to cut ties to Chinese businesses like Huawei and cracking down on Chinese researchers in the US.

“I hope the US side will treat fairly Chinese companies and their regular trade and investment activities and give support to the collaboration between enterprises, research institutes and schools and colleges of the two countries,” he said.

Senior US officials have said that China can expect further tariff relief only if it implements the phase one deal properly and makes new concessions in a second stage of talks, aimed at tackling some of the unresolved sticking points. Mr Trump said Wednesday that tariffs would remain in place until the second phase of the deal was agreed.

Although discussions about the next phase of talks are expected to begin after the phase one deal takes effect in mid-February, there is no set timeline for their conclusion. It is unclear whether a second agreement will be reached before the US presidential election in November.

Mr Trump is likely to make the deal a centrepiece of his re-election campaign. He has vowed to rebalance trade with China through a hardline approach that differed dramatically from the economic engagement pursued by previous administrations.

But the limited concessions from Beijing and the damage inflicted to key sectors of the US economy during the course of the trade war, including manufacturing and agriculture, could prove a political liability.

“China is the big winner of Trump’s ‘phase-one’ trade deal with Beijing,” Joe Biden, the former vice-president, and a leading contender for the Democratic party’s nomination for president, said on Wednesday.

“True to form, Trump is getting precious little in return for the significant pain and uncertainty he has imposed on our economy, farmers, and workers. The deal won’t actually resolve the real issues at the heart of the dispute,” he added.

US business groups, many of which had criticised Mr Trump’s tariffs, largely backed the deal as a welcome respite.

“This deal provides much-needed certainty to American businesses as they start the new year,” said Tom Donohue, chief executive of the US Chamber of Commerce, the largest lobby group for corporate America. “We hope this deal will usher in a new era of trust between the two countries and pave the way for phase two negotiations to begin in a timely manner.”