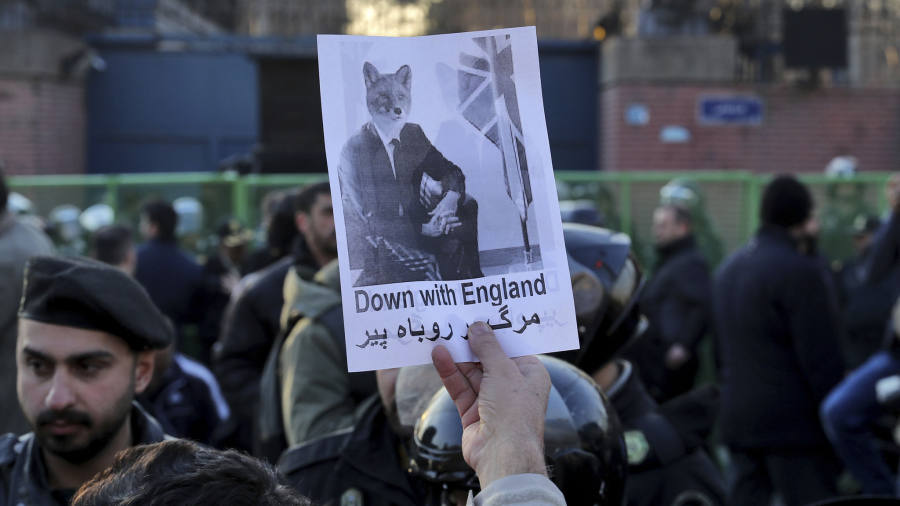 The UK, France and Germany have triggered a dispute mechanism in the 2015 nuclear agreement with Iran, their most robust response yet to Tehran’s decision to abandon the uranium enrichment limits set in the accord.

The European move pushes the agreement closer to collapse and comes amid escalating diplomatic tensions between the west and the Islamic republic.

The three countries, known as the E3, said in a joint statement they had been “left with no choice, given Iran’s actions” but to trigger the dispute mechanism.

The move could ultimately lead to the reimposition of UN sanctions on the republic. European diplomats say they are not yet at that stage and insist they are still working to save the deal, which is deemed critical to restricting Tehran’s ability to develop the capacity to build nuclear weapons.

“We do this in good faith with the overarching objective of preserving the JCPOA [nuclear accord] and in the sincere hope of finding a way forward to resolve the impasse through constructive diplomatic dialogue,” the E3’s foreign ministers said. “In doing so, our three countries are not joining a campaign to implement maximum pressure against Iran.”

But they also want to register their concern over Iran’s announcement this month that it would end limits on the number of centrifuges used for enrichment. Tehran took the decision — which means it no longer abides by any of its commitments on uranium enrichment — days after a US drone strike killed Qassem Soleimani, Iran’s most powerful military commander.

The nuclear accord’s signatories — which also include China and Russia — will now meet within 15 days to discuss their concerns. Diplomats describe the mechanism’s process as “flexible” and “extendable” and it could drag on for months.

France, the UK and Germany have been battling to save the deal since Donald Trump unilaterally withdrew the US from the accord in 2018 and imposed crippling economic sanctions on Iran. The decision to trigger the dispute mechanism comes as Tehran is threatening to kick out the UK ambassador, alleging the British diplomat participated in an illegal anti-government gathering in the Iranian capital.

Iran has been increasing its nuclear activity in stages since May as it complains that it is no longer receiving the economic dividend it was promised when it signed up to the deal.

Under the accord, the Islamic regime agreed to curb its atomic activity in return for many western sanctions being lifted, but Washington’s punitive measures have strangled its ability to export oil and driven the republic into its worst recession for decades.

The Trump administration’s “maximum pressure” policy has heightened tensions across the region, with Washington accusing Tehran of conducting attacks on Saudi Arabia’s oil infrastructure and tankers in the Gulf.

The E3 share the US’s concerns about Iran’s support for regional militant groups and the development of its ballistic missile programme. But they believe the nuclear deal is vital to avoiding a regional arms race and maintaining diplomatic channels with the republic.

Josep Borrell, EU foreign policy chief and co-ordinator of the Iran nuclear deal, said he expected all parties to make “intensive efforts in good faith” now the dispute mechanism had been triggered.

“The JCPOA is a significant achievement of sustained multilateral diplomacy following years of negotiations,” he said. “In light of the ongoing dangerous escalations in the Middle East, the preservation of the JCPOA is now more important than ever.”

The US sanctions have, however, stymied European efforts to keep open finance and trade lines with Iran to ease the economic pressure on the regime.

Iran says it is still committed to the accord, and has continued to allow the International Atomic Energy Agency, the watchdog, to monitor its nuclear activity. It says that all the steps it has taken, including increasing its stockpile of enriched uranium and ramping up its nuclear research and development, are reversible if the republic receives the economic benefits it expects.

After the European announcement, Mohammad Javad Zarif, Iran’s foreign minister, accused the E3 of jeopardising the deal by bending to American pressure.

“For 20 months, the E3 — following UK appeasement policy — has bowed to US diktat. That hasn’t gotten it anywhere — and it never will,” he said on Twitter. “E3 can save JCPOA but not by appeasing the bully & pressuring the complying party. Rather it should muster the courage to fulfil its own obligations.”

Mr Zarif’s statement came after Boris Johnson, the UK prime minister, repeated a call he made last year for a new US deal on Iran. “Let’s replace it and let’s replace it with the Trump deal. That’s what we need to see,” Mr Johnson told the BBC.

Tehran’s main concern is its ability to sell its oil, the lifeline of the economy, as US sanctions have reduced its exports from about 2.8m barrels a day in May to less than 500,000 bpd.

Robert Malley, president of the International Crisis Group, branded the European decision a “mistake” that could have the “unintended consequence” of strengthening hardliners in Iran who wanted to junk the deal.

Mr Malley, who helped negotiate the nuclear deal as an Obama administration official, said the Europeans now needed to use the process “smartly” to create space for talks with Iran running up to and even beyond the US presidential election in November.

But he warned: “Once you invoke this, a clock starts ticking and the message to Iran is ‘you are moving away from us.’”