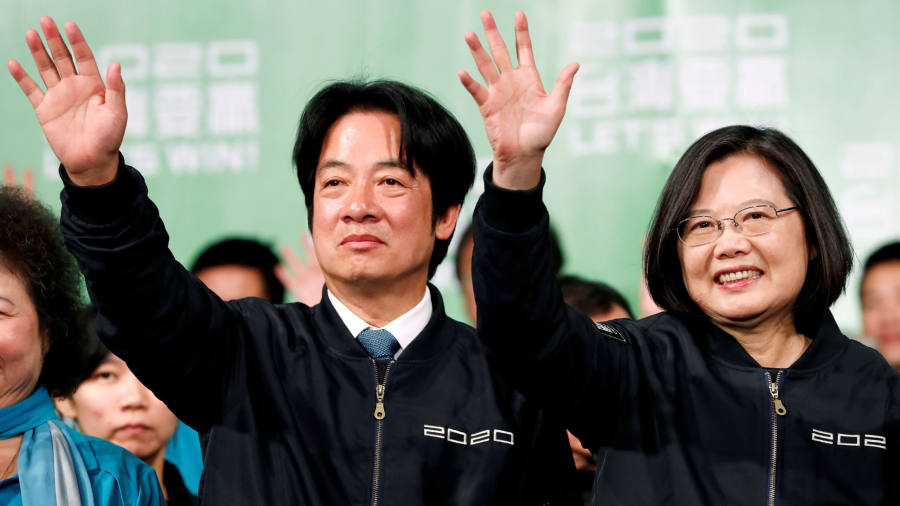 Taiwanese voters re-elected Tsai Ing-wen with the highest vote count ever seen in the country’s presidential elections, in a strong message of rejection of authoritarian China.

Following a campaign in which she framed the race as a battle to defend Taiwan’s sovereignty and democracy against the threat of encroachment from Beijing, as highlighted by the protests in Hong Kong, Ms Tsai defeated her more China-friendly challenger Han Kuo-yu with 57.1 per cent of the vote.

She received 8.2m votes, the highest number since Taiwan started direct presidential elections in 1996. Her Democratic Progressive party retained control of the legislature, according to final results.

Ms Tsai’s resounding victory gives her a strong mandate to continue her resolute defence of Taiwan’s de facto independence against demands from Beijing that the island submit to its control.

“These results carry added significance. We have shown that when our sovereignty is under threat, the Taiwanese people will shout out our determination even louder,” Ms Tsai said.

“We hope that this election result can give the Chinese government an accurate message: the Taiwanese people reject ‘one country two systems’. We value our democratic lifestyle, and we defend our sovereignty,” she added.

China claims Taiwan as part of its territory and threatens to invade if the island resists unification indefinitely. A year ago, the Chinese president Xi Jinping stressed in a speech on Taiwan policy that Beijing intended to use a “one country two systems” model for Taiwan — a proposal which the country’s public has firmly rejected for 30 years. The months-long protests in Hong Kong discredited the formula even further throughout Taiwan’s presidential campaign.

State media in China on Sunday issued only brief reports about Ms Tsai’s re-election. But the State Council’s Taiwan Affairs Office said it would continue to pursue a “one country, two systems” model, first adopted in Hong Kong, for reunification.

Ms Tsai, whose support was sluggish just a year ago, staged a resurgence after making the protection of Taiwan the central plank of her campaign.

“China is always present to a certain extent in Taiwanese presidential elections, but this time that was much more pronounced,” said Shelley Rigger, a professor at Davidson College carrying out research in Taiwan.

Since Ms Tsai took office in 2016, Beijing has suspended government contacts and dialogue which it had conducted with her predecessor Ma Ying-jeou from the Kuomintang, or KMT, the opposition party which originally came from mainland China. Beijing has also stepped up efforts to internationally isolate Taiwan and intimidate it militarily, and tried to squeeze its economy by drastically limiting tourism to the island.

Ms Tsai said she expected pressure from China would continue and probably only intensify. But she appealed to Beijing to find more “healthy and sustainable ways of engagement”.

“If Beijing is willing to respect the will of the Taiwan public and recognise the fact of the existence of the Republic of China [Taiwan’s official name], and deal with Taiwan with peace and parity, then we are willing to restart dialogue and negotiations any time,” she said. “What I am proposing is only fair and reasonable.”

Acknowledging Ms Tsai’s big victory, Hu Xijin, editor of the Communist party-controlled tabloid Global Times, warned the Taiwanese president against miscalculation. He hoped the result would not encourage her “to take further radical policy to provoke the mainland”.

The US, the unofficial guarantor of Taiwan’s security, congratulated Ms Tsai. Calling Taiwan’s democracy, market economy and vibrant civil society a model for the Indo-Pacific region and a force for good in the world, secretary of state Mike Pompeo said in a statement: “The United States thanks President Tsai for her leadership in developing a strong partnership with the United States and applauds her commitment to maintaining cross-Strait stability in the face of unrelenting pressure.”

Mr Han from the opposition KMT had run a campaign promising to make “Taiwan safe and the people rich”. But he offered few concrete policies and focused on accusing the DPP of corruption and failed economic policies.

The KMT is China’s former ruling party which fled to Taiwan in 1949 after defeat in the Chinese civil war. In contrast to the homegrown DPP, it holds that Taiwan is part of “One China”, although it does not agree with unification with the People’s Republic under Beijing’s terms. Mr Han made himself a target for criticism from Ms Tsai and alarmed many voters by only hesitantly expressing support for the Hong Kong protesters and being slow to reject Mr Xi’s one country two systems push.