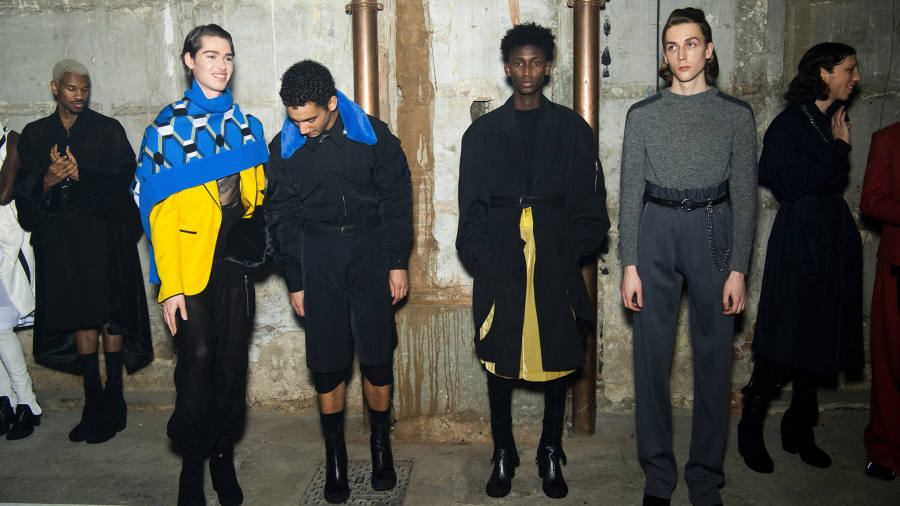 “Haven’t we been here before?” asked Luke Day, the fashion director of British GQ, as we entered the Palazzo Corsini, overlooking the Arno in Florence, for the Autumn/Winter 2020 show staged by young New York-based designer Telfar Clemens at Pitti Uomo on Thursday night. He was right, we had been, over a decade before, for a show by the Belgian designer Haider Ackermann, held open-air in the balmy evening in the palazzo’s courtyard. It proved an experience that lingers in memory.

And it is precisely that reason the catch-all buzzword of “experiential” has been used to describe the marketing of a whole bunch of things in fashion, from perfume to underwear. In a hyper-saturated media landscape, they create memories — and marketable images — that stick around.

With few designers showing each season as guests — this time, Jil Sander, Telfar and Random Identities, the one-year-old brand by former Yves Saint Laurent designer Stefano Pilati — and freed from the slog of hourly scheduled show slots, Florence’s fashion showcase offers designers the chance to experientially experiment. So, within the space of two hours, we had Clemens stage a baroque banquet in a tapestry-hung hall and Pilati a standing-room-only show in a smoked-out train station. Why not?

Neither will be easily forgotten. Despite the outward differences in location, the ideology and indeed the experiences of each were somehow united. Clemens’ audience members sat at a circular table, along which his multidimensional cast of models walked in unisex clothes the designer described as “like a lapsed Medici on spring break in Miami Beach”.

The designer turns 35 this year, and his point of view is informed by the concerns of a new generation, ones rinsed of gender divisions in cloth (skirts for everyone!) and where social consciousness is at a premium. In 2017, the year he won the CFDA/Vogue Fashion Fund — a cash injection of $400,000 for a fledgling fashion business — he also designed a capsule collection and the uniforms for several thousand employees of the American fast-food chain White Castle.

The proceeds were used to pay bail for young people held at Rikers Island prison — which isn’t how these collaborations between cash-strapped young designers and mass corporations usually play out. Clemens also has a hit handbag: a vegan leather tote embossed with his initials and colloquially dubbed the Bushwick Birkin for its popularity among denizens of that neighbourhood in Brooklyn.

The clothes his models wore as they wound around silver platters and overflowing cornucopia were less easily saleable, but had a distinct identity. Many were patchwork, as if constructed from multiple garment types, a pair of jeans morphing from a crutch of denim into sweat shirting, or maybe kicking out into a down-padded flare around the calf.

One model, Carrie Stacks, a black trans woman from south London, walked around the curve in the table and then descended, beginning to perform a song halfway through the show. She has launched an online campaign to raise funds for her debut album, which deserves to happen. It was an experience. The clothes were complicated and yet direct. Telfar uses a portmanteau, “simplexity” to describe them, which is accurate: varsity slogans of his name were chopped up and swapped, to read “FAR TEL”, like a statement on distance or, maybe, a play on cartel. Which is slightly more interesting in its original definition: a coalition arrangement between political parties intended to promote a mutual interest.

Clemens’ interests lie in exploring contemporary identities, gender for sure, but also fundamentally black identity, in a way fashion seldom does without appropriation. That’s because so few people of colour are able to rise through fashion’s ranks to positions of influence: Clemens has navigated it, and is now making his voice heard. His audience — all fans, including Solange Knowles — cheered him on.

There were cheers for Pilati too — literally, as the designer walked in his own fashion show as the last model. At 54 he’s a well-known and loved figure in fashion — he was featured on the cover of the Amsterdam-based menswear magazine Fantastic Man in 2006, when he was the creative director of Yves Saint Laurent.

He’s also worked for Prada, Armani and Zegna. Still, there were many in the audience who didn’t really know who Pilati was — or perhaps they were just confused by a fashion designer modelling in his own show, which is fair enough, although it reminded me of the striking story of the couturier Charles James modelling his own dresses for department store buyers in the 1950s when he decided the professionals engaged for the job were not up to par. (The stores bought the dresses.)

Pilati has previously stated that this venture, his Berlin-based label Random Identities — the name another link between his sensibility and Clemens’ — is an extension of his already extensive wardrobe. He pulls bits and pieces he likes from clothes he has designed in the past, fusing them into something different and new. That’s how he self-deprecatingly describes it, but it’s obviously much more complex.

I asked him if he’d describe it as selfish, and he agreed, laughing. Having worked for many other hands and under other names, this is Pilati satisfying himself. And satisfying his audience: 80 per cent of the models in Pilati’s show were friends of the designer, flown over for the occasion from Berlin. And their gender identities, ethnicities, ages and body shapes were wildly diverse, just like those at Telfar. As a middle-aged, white, cis-gender man, Pilati was the odd one out in the show cast. How rare when anyone can say that.

That freedom was reflected in the clothes, many of which are already on sale, for instance on the website Ssense.com, who supported Pilati’s first Random Identities show in Toronto in the winter of 2018. More will go on sale soon; and some pieces, Pilati says, may never go on sale. He isn’t interested in the idea of collections, of built-in obsolescence, another idea that feels cued to a new generation’s new way of thinking.

Physically describing the clothes, there was a lot to love: Pilati has worked in fashion for decades so his cut is masterful; he is also personally incredibly stylish, so in creating clothes for himself he ensured they will look great. There were wide-shoulder double-breasted suits, slouchy trousers, the top of an MA-1 jacket hacked into a bolero, possibly more mesh shirts than anyone needs. But you got the message. The genders may have been fuzzed together, but there was nothing random about its identity.

Follow @financialtimesfashion on Instagram to find out about our latest stories first. Listen to Culture Call, the FT’s transatlantic culture podcast, which interviews people shifting culture in London and New York. Subscribe at ft.com/culture-call, Apple Podcasts, Spotify or wherever you listen to podcasts