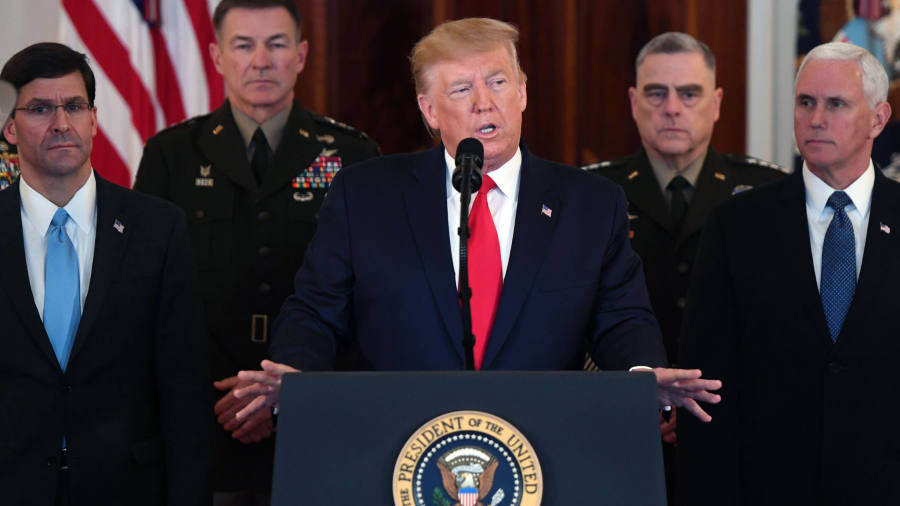 Donald Trump signalled that the US would not respond militarily to Iran’s attacks on American forces in Iraq, in a bid to de-escalate the crisis in the Middle East triggered by his order to kill Iran’s top general.

Flanked by his top national security advisers, Mr Trump said on Wednesday at the White House there had been no American or Iraqi casualties after Iran fired more than a dozen ballistic missiles at two bases in Iraq on Tuesday night and that the attack had resulted in only “minimal damage”.

The US president, who had previously threatened “disproportionate” military action against Iran in the event of a retaliatory attack, said the US would instead move ahead with “punishing economic sanctions” while it evaluated “options in response to Iranian aggression”.

The president’s comments suggested that the US and Iran were pulling back after five days of brinkmanship that had raised fears of an all-out war, following the killing of the Iranian military commander Qassem Soleimani. The US and Iran had exchanged de-escalatory messages overnight through a Swiss back channel, a person familiar with the matter told the FT.

Soleimani, who the US accused of plotting imminent attacks against Americans, was Iran’s most important military leader and his killing in a US air strike last week provoked promises of retribution from Tehran.

Though the decision to halt military action should now pause the conflict, experts cautioned that the confrontation between Washington and Tehran was far from over.

“This could only be a victory if Trump is able to translate this moment into a diplomatic initiative,” said Vali Nasr, professor of Middle East and International Affairs at the School of Advanced International Studies. “Otherwise he will lock himself into further escalation, more troops and war — things he disavowed.”

Mr Trump’s speech was met with guarded relief on Capitol Hill. Marco Rubio, the Republican senator from Florida and a foreign policy hawk, said Mr Trump had “succeeded in restoring deterrence” but warned that Iran still needed to be “held accountable” for any attacks by proxy forces in the Middle East.

Rand Paul, the Kentucky Republican senator who criticised the president for moving towards a conflict without congressional authorisation, was upbeat after speaking to Mr Trump on Wednesday: “The president shares my thoughts that the last thing we need is another ground war. He doesn’t want endless wars. I continue to hope for de-escalation and diplomacy.”

Nancy Pelosi, the Democratic speaker of the House of Representatives, said the chamber would vote Thursday on a resolution to limit the Trump administration’s ability to take military action against Iran without congressional approval.

Nancy Pelosi, the Democratic speaker of the House of Representatives, said the chamber would vote Thursday on a resolution to limit the Trump administration’s ability to take military action against Iran without congressional approval.

Mr Trump also used the speech to restate calls for world powers to join the US in abandoning the 2015 nuclear deal negotiated by Barack Obama — known as the Joint Comprehensive Plan of Action, or JCPOA — and said Iran would never be allowed to have a nuclear weapon.

“The time has come for the UK, Germany, France, Russia and China to recognise this reality, they must now break away from the remnants of the Iran deal or JCPOA,” Mr Trump said. “We must all work together toward making a deal with Iran that makes the world a safer and more peaceful place.”

Mr Trump also called on Nato to become “much more involved in the Middle East process”, saying US energy independence had changed US “strategic priorities” in the region.

“We are independent, and we do not need Middle East oil,” Mr Trump said.

The president did not address whether the US would maintain its forces in Iraq, but said earlier this week it was not the right time for troops to leave. After the US strike against Soleimani as he left the airport in Baghdad, Iraqi lawmakers voted to expel US troops from the country.

The Iraqi military said on Wednesday that two Katyusha rockets exploded inside the Green Zone — the semi-fortified square mile of central Baghdad that contains the US embassy and government buildings — but that there were no casualties. Katyushas are notoriously inaccurate munitions and are frequently fired into the Green Zone.

In his speech, Mr Trump also took a new jab at Mr Obama’s nuclear deal, as he sought to deflect criticism that his withdrawal from the 2015 agreement had led the US to the brink of war with Iran.

“The missiles fired last night at us and our allies were paid for with the funds made available by the last administration,” he said.

Nato said secretary-general Jens Stoltenberg and Mr Trump had agreed in a phone call on Wednesday that the western alliance “could contribute more to regional stability and the fight against international terrorism”. It gave no further details of what Nato planned.

“Nato plays a key role in the fight against international terrorism, including through training missions in Iraq and Afghanistan and as a member of the global coalition to defeat ISIS,” a statement from the alliance’s headquarters said.

Nato has suspended its Iraq training mission due to security concerns.

US stocks rallied and oil added to its losses following Mr Trump’s remarks, as investors bet a broader conflict may have been averted.

Wall Street’s S&P 500 jumped to trade at a record intraday high, while Brent crude was down more than 4 per cent at $65.64 a barrel.

Gold, a safe haven for investors during times of turmoil, was down 1.3 per cent.