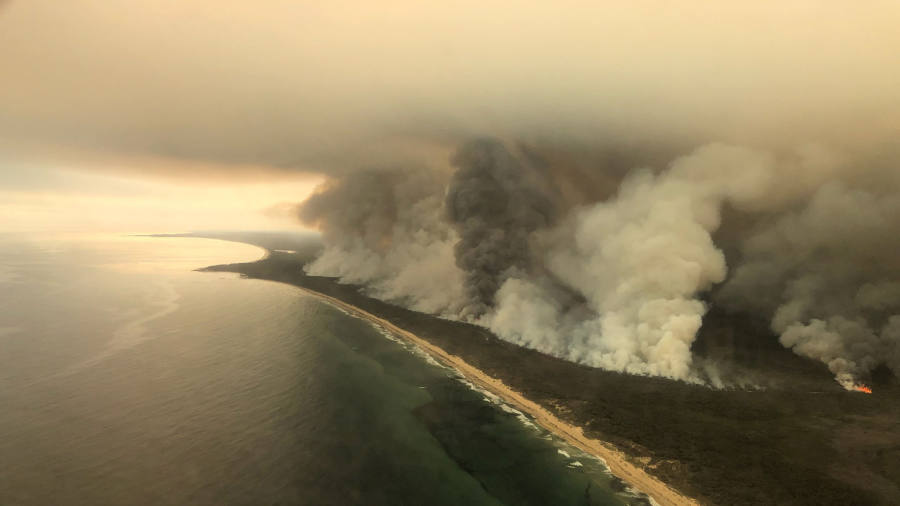 Australia experienced the hottest and driest year in its recorded history in 2019, which was a major contributing factor to the devastating wildfires that continue to rage, the country’s meteorology bureau said.

Data released on Wednesday by the climate monitoring body show Australia’s mean temperature in 2019 was 1.52C higher than average, making it the warmest year since records began in 1910. Rainfall was 40 per cent below average, its lowest level since 1900, the bureau said.

“January last year was the warmest month Australia has ever recorded, while just a few weeks ago, in December, we saw the Australia-wide record hottest daily average maximum temperature broken multiple days in a row,” said Karl Braganza, head of the meteorology bureau.

Bushfires have been ravaging large parts of Australia for months, growing more extreme in recent weeks and killing at least 24 people. The blazes have burnt across 12m acres of land, an area larger that Denmark, causing devastation to forests and wildlife. One estimate suggested that by the time the fires have subsided, 1bn animals could have died.

The blazes have sparked a fierce debate in Australia over whether man-made climate change is to blame. Critics have accused prime minister Scott Morrison and his government of downplaying the severity of the fires and the role played by climate change, and prioritising the interest of the country’s important coal industry.

Mr Morrison has defended his government’s actions. “Blame does not help anybody at this time and over-analysis of these things is not a productive exercise,” he said on Sunday.

Mr Braganza said that the precise contribution of climate change to an individual weather event or fire season was difficult to determine, but that the trend pointed to higher temperatures, reduced rainfall and a longer fire season.

The country’s climate had warmed by more than 1C since 1910, he said, meaning that very warm years such as 2019 were “more likely to occur”. As a result of changing weather patterns in recent years, the fire season had extended by a month in some locations, and fires had become more severe, the bureau said.

Professor Bob Hill, director of the Environment Institute at the University of Adelaide, who is not affiliated with the meteorology bureau, said the “only long-term solution” to worsening bushfires was to reduce greenhouse gas emissions.

“This is a global catastrophe that has now hit Australia hard. There is no reason to believe that this is an isolated event,” he said.

The fires have forced tens of thousands of people to evacuate the states of New South Wales and Victoria. As the crisis worsened this month, the government dispatched the navy to help stranded people escape tourist towns along Australia’s east coast.

This week, fires also broke out in neighbouring New Zealand, some areas of which had already been cast into shadow by smoke that had drifted across the ocean from Australia.

Besides fires, the researchers pointed to other extreme weather events that occurred in Australia in 2019, including unusually late tropical cyclones in May, severe storms, large areas of flooding and widespread droughts.

Climate activists and scientists said such extreme weather should not come as a surprise, pointing to a government report published more than a decade ago that warned of more severe bushfires. The Garnaut Climate Change Review from 2008 warned that as result of climate change, “fire seasons will start earlier, end slightly later, and generally be more intense. This effect increases over time, but should be directly observable by 2020.”

Activist group Extinction Rebellion said it would stage a demonstration outside the Australian embassy in London on Friday to protest the Australian government’s “failure to respond to the bushfires and address the climate and ecological crisis”.