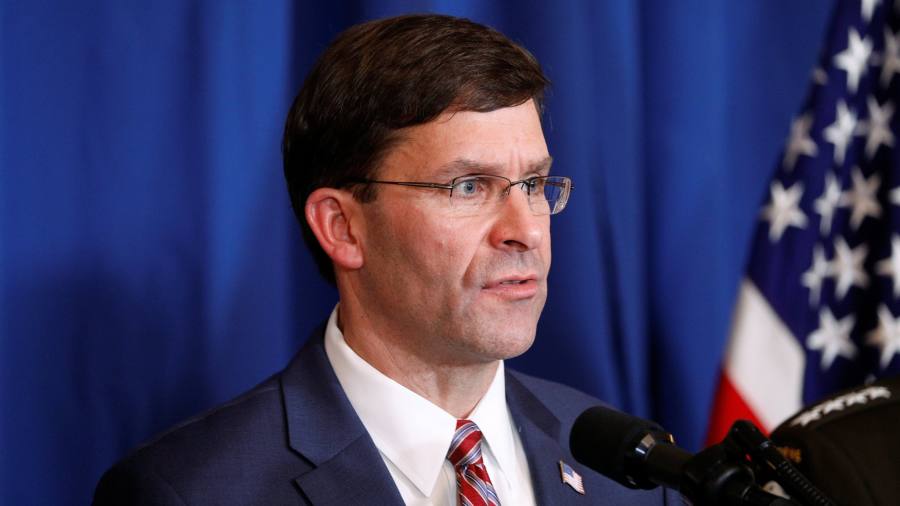 General Mark Milley, the US’s top military official, denied that America is pulling troops out of Iraq, saying that a leaked letter by the commander of US forces in the country indicating preparations for withdrawal was a “draft” and a “mistake”.

In an afternoon of confusion at the Pentagon, Gen Milley told reporters on Monday that the unsigned letter, which was obtained and posted online by news agencies, should never have been revealed.

“That letter is a draft, it was a mistake, it was unsigned, it should not have been released . . . poorly worded, implies withdrawal, that is not what’s happening,” the chairman of the joint chiefs of staff said.

Mark Esper, the US defence secretary, also said that reports of a possible US troop withdrawal from the country were inaccurate. “There’s been no decision whatsoever to leave Iraq”, he said.

Alyssa Farah, Pentagon spokesperson, added that the US continued “to consult with the Iraqi government” but that there had been no change in US policy with regard to force presence in Iraq.

There’s been no decision whatsoever to leave Iraq

The fate of US forces in Iraq has come into sharp focus a day after the country’s lawmakers voted in favour of removing foreign forces from Iraqi territory, a move triggered by the US’s killing of a top Iranian general, Qassem Soleimani, in Baghdad last week.

US allies were caught off-guard by reports that the US was withdrawing and scrambled for information from Washington. State department officials have insisted the US wants to stay in Iraq to avoid ceding further influence to Iran in the country and continue to fight against Isis.

The letter in question was sent by William Seely, the Iraq task force commanding officer, to an official in the Iraqi defence ministry. It said the coalition would be “repositioning forces” in the coming days and weeks “to prepare for onward movement”.

The letter also hinted that the US understood the Iraqi government’s wish for foreign troop withdrawal, concluding: “We respect your sovereign decision to order our departure.” Donald Trump had responded to the non-binding parliamentary vote by threatening Iraq with sanctions if it forced out American troops.

Yet in a meeting with Matthew Tueller, the US ambassador to Baghdad, on Monday Adel Abdul Mahdi, Iraq’s caretaker prime minister, wasted no time in pressing the US to begin pulling out.

Mr Abdul Mahdi, who had recommended parliament vote in favour of expelling foreign troops, stressed to Mr Tueller the “necessity of joint work to implement the withdrawal of foreign forces” in accordance with parliament’s decision, according to the prime minister’s office.

About 5,000 American military personnel form the backbone of an international coalition formed to help Iraq fight Isis in 2014, and have been training and assisting Iraq’s security forces. The anti-Isis coalition would be unlikely to continue without the US army, which provides protective cover to its partners.

Robert Malley, former White House adviser on the campaign against Isis and co-ordinator for the Middle East during the Obama administration, said the episode involving the draft letter was an ominous sign for the US military presence in Iraq despite the Pentagon’s reassurances.

“[The US] presence in Iraq has become increasingly tenuous at a time when a vast array of political forces want them out, and when threats to their security are on the rise,” he said.

“[A]ny step toward a withdrawal will be viewed as an unmistakable Iranian success and a no less unmistakable American defeat,” said Mr Malley, adding it was one of the “more striking ripple effects of the reckless decision to kill Qassem Soleimani.”