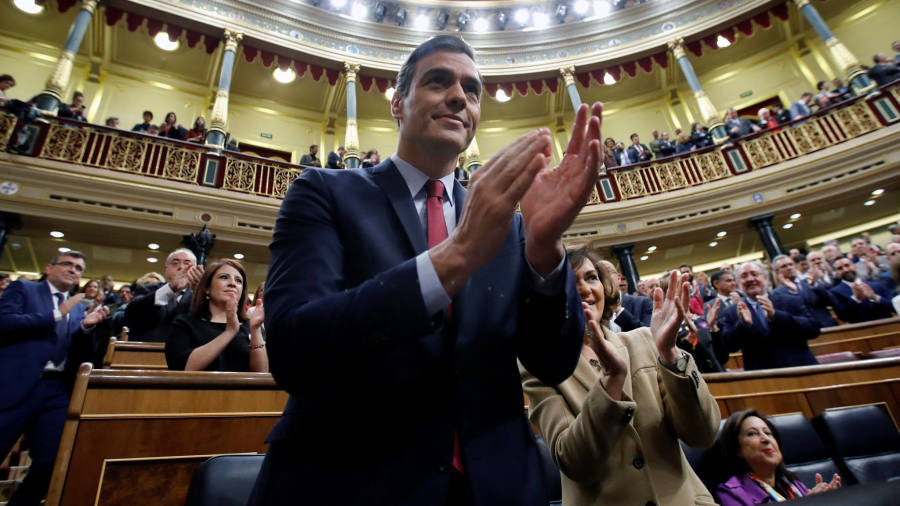 Spain will have a coalition government for the first time in its modern history — including ministers from the far-left — after parliament confirmed Pedro Sánchez as prime minister by a wafer-thin margin.

Tuesday’s 167-165 vote, which came after a furious debate in the country’s chamber of deputies, paves the way for Mr Sánchez to be sworn in on Wednesday at the head of a coalition of his Socialists and the radical left Podemos movement.

In a combative speech ahead of the vote, Mr Sánchez portrayed the new government as a break with four years of political instability in which Spain held four general elections and lacked a strong government.

“There are only two options: either a progressive coalition or a continuing impasse for Spain,” he said, as he called on the right to accept the result of the last, inconclusive election in November, when the Socialists came first but fell far short of an overall majority.

The new administration — which will be the first to include Communist ministers since the 1936-1939 civil war — plans to increase taxes on big corporations, bolster collective bargaining, reduce carbon emissions and combat gender-based violence.

The vote is a personal achievement for Mr Sánchez, who had previously tried and failed to win parliament’s backing to form a government in both 2016 and 2019. He came to power 18 months ago only through winning a vote of no confidence in the previous centre-right administration.

But the tiny margin indicated the new administration’s limited room for manoeuvre, while the angry debate highlighted the increasing polarisation of Spanish politics.

In bad-tempered exchanges rightwing politicians rounded on Mr Sánchez for his reliance on Catalan and Basque separatists in Tuesday’s vote.

“You are the Trojan horse [being used] to destroy the state,” said Pablo Casado, the leader of the centre-right People’s party, as both sides made references to the civil war and rightwing deputies shouted “Long live Spain!” and “Long live the king!”.

“If you satisfy the demands of your partners against the system, Spain will be broken. If you do not, they will throw you on to the street.”

The Socialists and Podemos have only 155 members of the 350-seat chamber of deputies, meaning that to take office the government required the abstentions of the ERC, the biggest pro-independence Catalan party, and of EH Bildu, a far-left Basque secessionist party.

The Catalan independence dispute is the most divisive issue in Spanish politics today, while many rightwing speakers evoked the bloody legacy of Eta, the now disbanded Basque group that killed more than 800 people over four decades.

Mr Sánchez had sought to avoid both a coalition with Podemos — which he said in September would keep him awake at night — and relying on the Catalan and Basque separatists.

But he concluded he had no alternative after the failure of his gambit of triggering November’s election, which left the Socialists with a handful of seats fewer than before.

Tuesday’s vote only took place after weeks of negotiations between the Socialists and the ERC, in which the separatist party promised its abstention in return for a road map for future negotiations over Catalonia.

But the tensions between the Socialists and the ERC were on display as Montserrat Bassa, one of the Catalan party’s deputies, described the government as “executioners” for its refusal to release separatist politicians jailed for their roles in a botched 2017 independence bid.