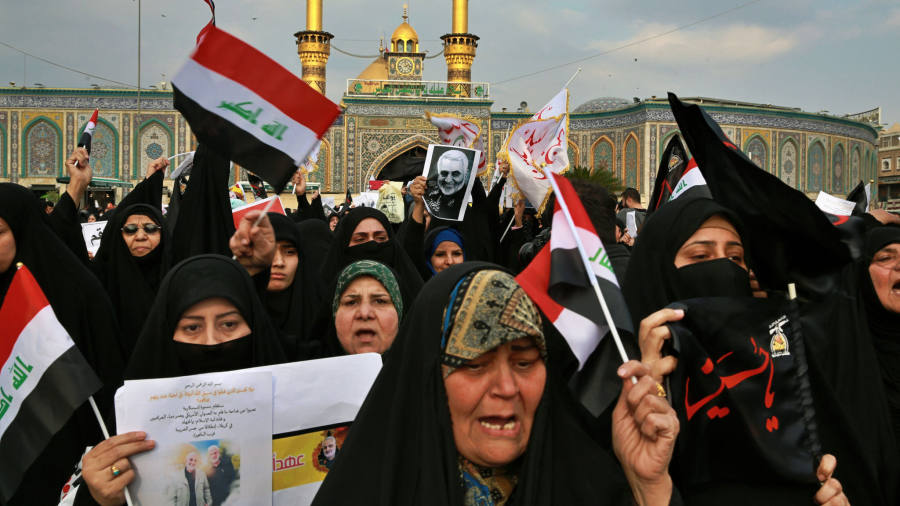 Militants fired rockets at an Iraqi base housing American personnel and into an area close to the US embassy in Baghdad, hours after tens of thousands of people took to the streets in a funeral procession for Iran’s most-revered military commander and a top Iraqi paramilitary leader.

The US assassination of Qassem Soleimani, head of the Iranian Revolutionary Guards’ overseas forces, is the most significant confrontation between America and Iran in years. It has triggered a dramatic escalation of tension in the Middle East, with Iraq, where Soleimani was killed on Friday, the most likely flashpoint.

Iraqi security forces told official media that “a number” of rockets had fallen on a parade ground in Baghdad’s so-called Green Zone, a fortified area that is home to the US embassy and offices of many Iraqi officials, and at Balad air base in Salahaddin province north of the capital, where some American troops are stationed. The statement did not say if anyone had been injured. Rocket attacks are relatively common in Iraq.

It was a barrage of rockets on an Iraqi military base in the northern city of Kirkuk last week, which killed an American contractor and crossed the Trump administration’s red line, that set off this latest escalation between the US and what Washington views as Iranian proxy forces in Iraq.

The latest rocket flurry comes after a Saturday funeral march for Soleimani in Baghdad grew into an expression of anger against the US, with chants of “down, down America” and “America is the great Satan” heard over loudspeakers.

The four-day funeral for Soleimani is the biggest of any military figure in Iran’s history and second only to that of Ayatollah Ruhollah Khomeini, the founder of the Islamic republic, in 1989.

Iran’s top commander of the Revolutionary Guards, Major General Hossein Salami, said on Saturday that the country would adopt “strategic revenge” to “put an end to the US presence in the region”. He said the assassination of Soleimani helped to “create a new energy over an expansive geography” by which various Islamic groups would “act spontaneously . . . and determined to take revenge . . . over time and with lasting impacts”.

Also being buried is Abu Mahdi al-Muhandis, one of Iraq’s most powerful Shia paramilitary chiefs and the commander of Kata’ib Hizbollah, the Iran-backed militia which the US blamed for killing the American contractor and then pounded with a series of air strikes that killed at least 25 of its fighters. He was in the car with Soleimani when it was hit by the US drone strike.

In a speech over Muhandis’s Iraq-flag draped coffin, Hadi al-Ameri, politician and paramilitary leader of the powerful Badr Organisation, vowed to continue his efforts to dislodge American forces from Iraq, and said the slain commander had followed the “path of the martyrs”.

However, it was unclear how Iraqi troops could respond to Kata’ib Hizbollah’s threat, as there have been no American bases in Iraq since the US pulled out its forces in 2011.

Kata’ib Hizbollah’s provocation, and the flurry of rockets, come as lawmakers prepare for an emergency parliamentary session, with deputy speaker Hassan al-Kaabi calling for a focus on deciding the future of US troops in Iraq.

The approximately 5,000 US forces currently in the country have been invited to help Iraqi forces fight Sunni jihadis Isis, and co-locate with Iraqi troops on Iraqi military bases. Washington has said it will send 3,500 additional troops to the region following the killing of Soleimani.

But Mr Abdul Mahdi said the double assassination was a violation of the conditions agreed for the anti-Isis US military mission in Iraq, and there is strong support from pro-Iranian politicians, who collectively form parliament’s biggest blocs, to have American troops expelled from the country.

Iraq’s three-month-old mass protest movement is also motivated by frustration with foreign interference in the country. Protesters have decried both American and Iranian meddling.

The UK government has announced that the Royal Navy would offer to accompany British-flagged commercial vessels through the Strait of Hormuz in light of the increased threat caused by Qassem Soleimani’s death, writes Helen Warrell.

Explaining the move Ben Wallace, the UK defence secretary, said he would take “all necessary steps to protect our ships and citizens at this time”.

The British military already has two warships in the Gulf — HMS Montrose and HMS Defender— which are part of an international monitoring operation prompted by Iran’s seizure of a British tanker last summer. The Royal Navy was providing “close accompaniment” of British-flagged vessels until early November, when the threat level was thought to have subsided.

Mr Wallace’s announcement signals that British assets in the Gulf are once again considered to be at higher risk since the Iranian commander’s death. However, accompaniment services will only be provided to vessels which request assistance.