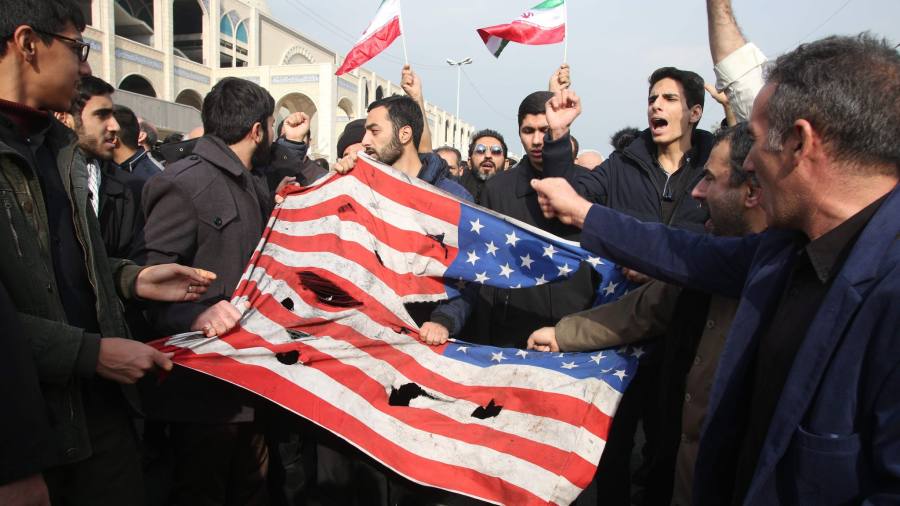 Donald Trump said the US did not want to “start a war” with Iran by assassinating Qassem Soleimani, saying he ordered the killing of the Iranian military commander as a pre-emptive strike to foil “imminent and sinister” attacks on US personnel.

In a brief statement at his Mar-a-Lago resort in Florida on Friday, the US president said the Iranian Revolutionary Guard, whose international force was led by Soleimani, had injured and murdered hundreds of Americans and plotted attacks against civilians around the world.

“His reign of terror is over,” Mr Trump said. “We took action last night to stop a war. We did not take action to start a war.”

The US also overnight directly contacted Ayatollah Ali Khamenei, Iran’s supreme leader, according to an official involved, delivering a message that Washington meant business but was also willing to talk with Tehran.

Robert O’Brien, Mr Trump’s national security adviser who was with the president at the time of the targeted strike on Baghdad airport, said on Friday evening he hoped Iran’s leadership would avoid escalation in favour of sitting down with the US.

But he added the Mr Trump’s national security team had “looked at all types of contingencies and what could happen post-operation”.

He said the assassination was prompted by American intelligence that Soleimani was planning attacks on US personnel in Syria after visiting Damascus. The attack came after the US embassy in Iraq was attacked by an Iran-backed militia and an American contractor was killed in an earlier strike on an Iraqi military base.

Ayatollah Khamenei vowed to take “tough revenge” after the killing, which has reignited tensions in the Middle East and raised fears of a full-blown conflict.

Tehran’s Supreme National Security Council said on Friday it had held an emergency meeting and made “the necessary decisions” without giving details. Brig Gen Esmail Ghaani, a deputy to Soleimani, was appointed the new commander of the Revolutionary Guards’ Quds force.

The US was due to send up to 3,500 additional troops to the region, with most of them expected to go to Kuwait, according to American officials. “Certainly we’re taking the Iranian threat of a possible response seriously and we are well positioned to defend US forces across the region,” an American official told the Financial Times. The US is estimated to have 54,000 troops in the Middle East.

Mr Trump said the US did not “seek regime change” in Tehran but Iran’s “aggression” in the Middle East, including the use of “proxy fighters”, needed to end. The US president said he was prepared to take “whatever action” was necessary with respect to Iran.

Mike Pompeo, US secretary of state, attempted to cool tensions earlier on Friday, saying he had spoken to counterparts in China, the UK, France, Germany, Afghanistan and Pakistan to reiterate America’s “commitment to de-escalation”.

The strike on Soleimani was aimed at deterring Iranian aggression and “setting the conditions for de-escalation”, he told Fox News television.

“[W]e are safer without him than we are with him,” said the official. Another senior administration official argued Iran was unlikely to respond militarily because of the risk of further US action.

“We’re speaking in a language the regime understands,” the official said.

The death of the general — who wielded extensive influence across the Middle East from Lebanon to Iraq, Syria and Yemen — nevertheless represents a ramping-up of the conflict between the US and Iran under the Trump administration. Diplomats have long feared that a miscalculation on either side could ignite a war in the region.

“It’s one of the most consequential assassinations in the Middle East in years,” said Aaron David Miller, a former state department official now at the Carnegie Endowment for International Peace. “The so-called shadow war will intensify with terror and additional assassinations.”

The attack, in which Iraqi militia leaders were also killed — including senior commander Abu Mahdi al-Muhandis — prompted calls for restraint from Europe and the Middle East. Anwar Gargash, the United Arab Emirates minister of state for foreign affairs, said on Twitter: “Rational engagement requires a calm and unemotional approach.”

The US also faced an emergency vote this weekend in the Iraqi parliament on a call for American troops to leave the country. A senior administration official said the US was working with its allies on the ground to “prevent it from happening”, adding that Iranian proxies were threatening Iraqis who were supportive of the US presence.

Mr Trump took a hard line against Iran when he campaigned for the presidency and in 2018 withdrew the US from a multilateral nuclear pact struck to encourage Tehran to limit its nuclear programme.

Since then, the US has imposed ever more stringent sanctions on the Islamic republic to bring “maximum pressure” on its oil-dependent economy. In June Mr Trump came close to launching a military strike on facilities run by the Revolutionary Guard — which the US designated as a terrorist organisation in April — before reversing the order.

Iran’s regional rivals, in particular Saudi Arabia, have sought reprisals since an attack on Saudi oilfields in September was blamed on Tehran, causing the worst disruption to the kingdom’s oil industry in almost 90 years.

The tension had appeared to ease but in December Washington blamed Iranian-backed militia for firing rockets at a base in Iraq that housed US troops, killing an American civilian contractor.

That death triggered air strikes against Kata’ib Hizbollah, a pro-Iranian Iraqi militia, killing 25 of its fighters, which in turn led to Tuesday’s retaliatory attack on the US embassy in Baghdad.

In the US, Democrats criticised Mr Trump’s actions. Joe Biden, frontrunner to challenge Mr Trump at November’s elections, said the president had thrown “dynamite into a tinderbox” with the assassination.

Oil prices jumped by more than 4 per cent to reach $69.16 a barrel, as traders bet the threat to supplies from the region had increased.