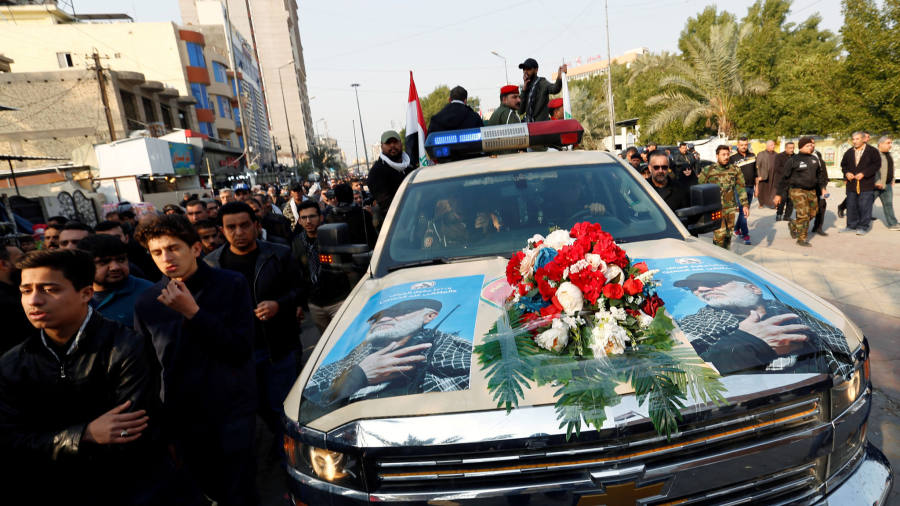 Hassan Rouhani has warned that Iran’s response to the killing of the country’s most revered military commander would be long and drawn out, as he drew parallels with the US-engineered coup that reinstated the Shah in 1953.

The assassination of Qassem Soleimani, head of the Iranian Revolutionary Guards’ overseas forces, in a US drone strike on Baghdad airport this week, is the most significant confrontation between the US and Iran in years and has triggered a dramatic escalation of tension in the Middle East.

“This crime that the US committed . . . is similar to the coup attempt . . . and similar to the downing of Airbus passenger flight in the Gulf [in 1988],” Mr Rouhani said on Saturday in a meeting with the family of Soleimani. “These crimes will never be forgotten.”

Donald Trump said on Friday that the US did not want to start a war” with Iran. He said he ordered the killing of Soleimani as a pre-emptive strike to foil “imminent and sinister” attacks on US personnel. However it has heightened tensions across the region, with fears that it could trigger a conflict between Iran and its regional proxies and the US and its allies.

The dramatic deterioration in relations between Washington and Tehran was precipitated by Mr Trump’s decision in 2018 to withdraw the US from the 2015 nuclear accord Iran signed with world powers and impose crippling sanctions on the Islamic republic.

Iranian leaders have vowed to take revenge and continue their controversial policies in the Middle East.

Mr Rouhani indicated on Saturday that Iran’s response could be a lengthy one. “Americans did not realise what a great mistake they made and that they will pay for the consequences of this crime not only today but also in the years to come.”

The 1953 coup against the democratically elected government of Mohammad Mossadegh marked the beginning of public hostility toward the US, although Shah Mohammad Reza Pahlavi maintained warm diplomatic relations until he was overthrown in the 1979 Islamic revolution.

Iranian revolutionaries seized the US embassy and held 52 diplomats hostage for 444 days — a move intended to prevent Washington from interfering in the newly fledged Islamic republic. For the US, this has remained an unforgivable act and diplomatic ties remain broken.

Iranians have also not forgiven the US for shooting down a passenger flight over the Gulf that was wrongly identified as a fighter jet in 1988. Around 300 passengers and crew were killed.

Soleimani, the 62-year-old commander of the elite Quds force, became the leading military figure in the Islamic world by confronting US and Israeli interests in the Middle East. He became a champion of Shia Muslims for helping defeat Isis in Iraq and Syria.

Arab states considered Soleimani and the forces he commanded to be the leading destabilising force in the region. At home, he was hugely respected by supporters and critics of the Islamic republic alike for keeping the country largely immune from spillover effects of conflicts in the region.

Soleimani’s four-day funeral, which began in Iraq on Saturday, is the biggest of any military figure in Iran’s history and second only to that of Ayatollah Ruhollah Khomeini, the founder of the Islamic republic, in 1989.

Footage of the funeral procession broadcast live by Iraq’s Al Sumaria channel and Iranian state television showed thousands of men marching in Baghdad’s central Jadriya neighbourhood, close to the so-called Green Zone where the US embassy is located.

The crowds of mourners carried militia insignias, as well as black flags associated with Shia Muslim religious festivals. Some held up posters featuring Abu Mahdi al-Muhandis, the Iraqi leader of Kata’ib Hizbollah who was killed alongside Soleimani, with slogans reading “We will never forget”. Many marchers appeared to be crying, and some wore military colours.

The US blames Kata’ib Hizbollah for firing a barrage of rockets at an Iraqi base on December 27, killing an American contractor — the spark for the latest escalation.

The show of strength comes as lawmakers prepare for an emergency parliamentary session, with deputy speaker Hassan al-Kaabi calling for a focus on deciding the future of US troops in Iraq.

There are roughly 5,000 US troops in Iraq. Washington has said it will send 3,500 additional troops to the region following the killing of Soleimani.

Adel Abdul Mahdi, Iraq’s caretaker prime minister, said yesterday that the double assassination was a violation of the conditions agreed for the anti-Isis US military mission in the country. Such a move would be strongly supported by pro-Iran politicians, who have agitated for the US to withdraw its soldiers for months but failed to push through a bill to that effect earlier this year largely through their disorganisation.

Soleimani’s body will be transferred to Iran later on Saturday, but will be first taken to the holy city of Mashhad, where the eighth Imam of Shias is buried. On Monday, the funeral will continue in the capital city Tehran before he is buried on Tuesday in Kerman, where he was born.

“His services for our country and for Iraqi, Syrian, Yemeni, Lebanese and Afghan people are unforgettable,” added Mr Rouhani.

UK warns against travel to Iraq and Iran

The warning comes amid fears that Iranian backed Shia militias will target western interests in retaliation to Qassem Soleimani’s death.

“We urge those British nationals in the region to remain vigilant and monitor the media carefully,” the Foreign Office said.