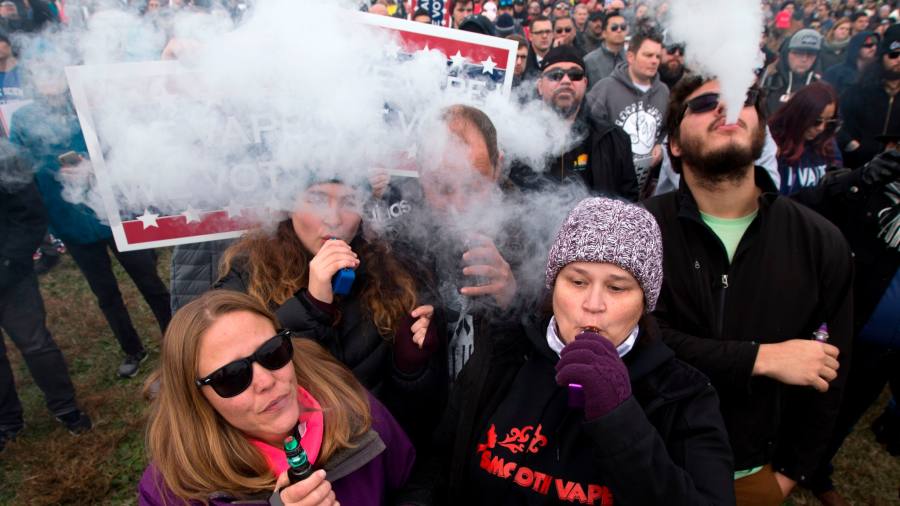 US regulators have unveiled long-awaited restrictions on some flavoured e-cigarettes in an attempt to contain an “epidemic” of teenage vaping, while stopping short of an outright ban, in a decision criticised by public health campaigners.

Companies have been given 30 days to cease the manufacture, distribution and sale of cartridge-based flavoured versions under a Food and Drug Administration policy laid down on Thursday. Tobacco and menthol-flavoured cartridge devices are exempted from the ban.

The measures, which allow e-cigarettes with other delivery systems such as tanks to remain on the market, are less far-reaching than those the Trump administration put forward in September.

Critics have warned the restrictions would undermine individual choice and threaten jobs. Shares in Altria, which owns a 35 per cent stake in cartridge-based e-cigarette maker Juul, fell 1.3 per cent to $49.25.

The decision cuts to the heart of a dilemma facing global health policymakers over how to treat e-cigarettes. Proponents highlight how the devices can wean smokers off traditional cigarettes, while opponents complain they are getting a new generation hooked on nicotine.

“This policy balances the urgency with which we must address the public health threat of youth use of e-cigarette products with the potential role that e-cigarettes may play in helping adult smokers transition completely away from combustible tobacco,” said Stephen Hahn, FDA commissioner, in a statement.

The ban was the first major action taken by the FDA since Dr Hahn, previously the chief medical executive of the MD Anderson Cancer Center, took over the top job last month. During his confirmation hearing in November, he said he supported “aggressive action to protect our children”.

Mr Trump has reportedly been concerned that an outright ban on vaping could hurt his re-election campaign. Pro-vaping activists led a campaign on social media with the hashtag #IVapeIVote and protesters demonstrated at events the president attended.

On Thursday, as Mr Trump returned to his golf club at Mar-a-Lago in Florida, dozens of pro-vaping demonstrators were there to greet him, chanting “We vape! We vote!”, according to a pool report.

The watered-down restrictions disappointed anti-vaping advocates who had called on the administration to follow through on a wider ban.

“President Trump and the FDA are going spineless in the face of corporate lobbying,” Jeff Merkley, a Democratic senator from Oregon, said in a statement. “The health of millions of American children will continue to suffer because of today’s announcement.”

Vaping has been blamed for causing an outbreak of a mysterious lung injury, which the US Center for Disease Control has said had affected more than 2,400 patients and killed seven since it began last summer. The injuries are thought to be associated with Vitamin E acetate, which was used primarily in products containing THC, a cannabinoid. The CDC and the FDA have both said people should not use e-cigarettes containing THC.

Matthew Myers, president of the Campaign for Tobacco-Free Kids, said the FDA’s proposals gave “a green light to the e-cigarette industry to continue to target and addict kids”.

Alex Azar, President Donald Trump’s health secretary, said: “The United States has never seen an epidemic of substance use arise as quickly as our current epidemic of youth use of e-cigarettes.”

The FDA added that while it was targeting those versions of e-cigarettes that are popular among young people, it left the door open to broader restrictions. “The agency will take additional steps to address youth use of those [other] products if necessary,” it said.