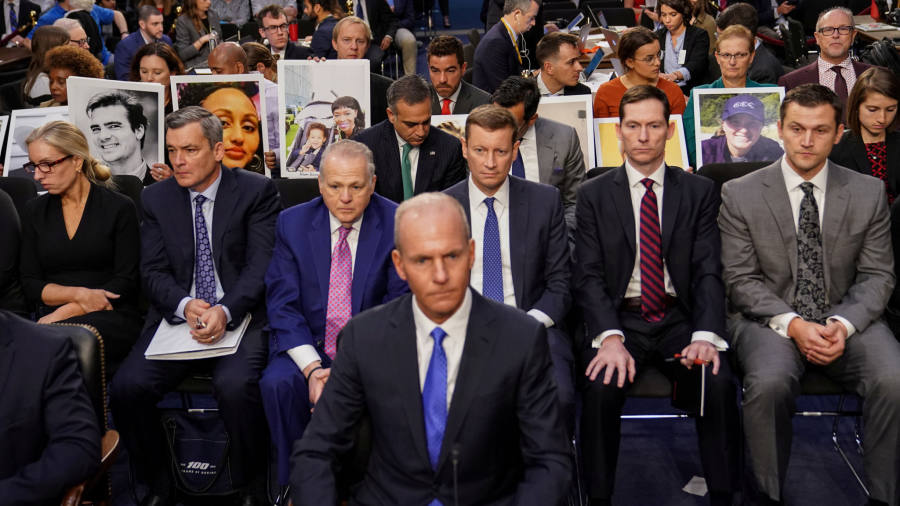 When Boeing’s board finally fired Dennis Muilenburg in December for his response to two fatal crashes, investors responded by marking its shares up 3 per cent. They did not bat an eyelid when reporters pointed out that the deposed chief executive could walk away with $39m.

To the typical fund manager invested in a company that is still worth more than $180bn, such sums are trivial. To families of the 346 people who died in the 737 Max crashes, any such pay-off must look positively offensive (each has been offered $144,500 in compensation).

Mr Muilenburg’s potential pay-off is a particularly jarring reminder of how relaxed institutional investors have been about rising executive remuneration. But with a high-profile commitment last year from America’s biggest business lobby that companies would treat other stakeholders as the equals of their shareholders, questions about high executive pay look sure to test how serious they are. Put mildly, employees and customers tend to have very different views from those of well-paid investors on how much the boss should earn.

Mr Muilenburg was one of the 181 US chief executives who signed the Business Roundtable statement last year and many welcomed it as a landmark in corporate America’s journey from “shareholder primacy” to “stakeholder capitalism”. One of his last acts as chief, though, was to ensure that Boeing would pay as large a dividend for 2019 as for 2018 (double what it was when he became chief in 2015). In other words, at Boeing, as elsewhere, there is no sign that shareholders’ short-term interests are any less of a priority than they were before.

This apparent gap between rhetoric and reality was enough for Robert Reich, who was US labour secretary under Bill Clinton, to declare this week that “corporate social responsibility is a sham”.

He is far from the only doubter questioning those who claim to represent a more responsible brand of capitalism. Democratic presidential candidates Bernie Sanders and Elizabeth Warren continue to call out gulfs between pay at the top and bottom of company organisation charts, with Mr Sanders proposing higher tax rates on firms whose top executives make anything over 50 times their median worker pay.

That would catch many large corporations. The Conference Board, a non-profit research group, said the median S&P 500 chief executive’s compensation reached 167 times that of their typical employee in 2018. The gap has also been growing, with median US chief executive pay increasing 24.7 per cent over the past five years, according to pay consultancy Equilar. It may have widened further in 2019 because the S&P 500 had its best year since 2013 — thanks to shareholders’ efforts to align executive interests with their own, stock now accounts for more than half of US chief executives’ total compensation.

Yet there has been no commensurate boom in shareholder revolts on pay: three-quarters of US boards’ remuneration plans still win more than 90 per cent support. That may have blinded compensation committees to how non-shareholders see the ever increasing rewards for corporate leaders.

Embracing the rhetoric of stakeholder capitalism suited boards eager to attract investment from a fast-growing industry of “environmental, social and governance” funds. But few have yet heeded calls for remuneration to reflect “stakeholder responsibility”.

We can almost certainly expect investors’ indulgent view of pay to hold sway in most boardrooms for now. But If they do not change their approach to the G in ESG, directors will not escape the kind of friction with other interested parties that will test bonds between companies and the stakeholders they now claim to care about.