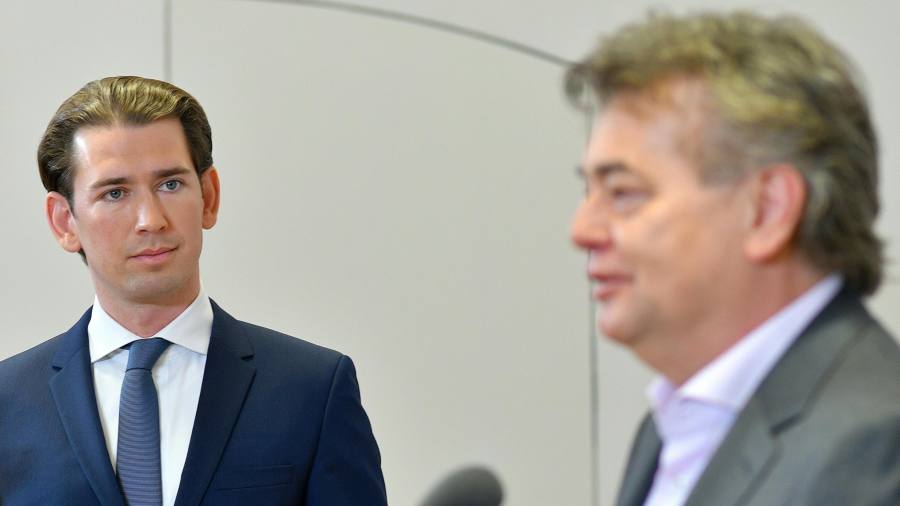 The young leader of Austria’s conservative People’s party, Sebastian Kurz, is to return to the chancellorship as the world’s youngest head of government in a new coalition with the country’s resurgent Green party.

A deal between the People’s party — which won 37.5 per cent of the vote in late September’s snap election — and the Greens, who surged to 13.9 per cent — was announced on Wednesday evening.

The pact will bring the Greens into power in Austria for the first time and represents a remarkable volte face for the popular and convention-defying Mr Kurz, whose first term in office, cut short abruptly by scandal in May, was won through an alliance with the far-right.

Negotiations between the two parties, whose policy platforms in areas differ wildly, has been continuing for weeks. Those close to the talks say the unconventional deal has been built in no small part on the unusual and unexpected personal rapport struck between the 33-year-old Mr Kurz and the leader of the Greens, the 58-year-old Werner Kogler.

Mr Kurz will be chancellor and Mr Kogler will become Austria’s vice-chancellor. The Greens are set to take control of an expanded environment ministry which will incorporate responsibility for energy policy and transport, according to a person closely connected to the discussions. The Greens are expected to take four cabinet posts.

The negotiations were not easy. Both parties can keep their key campaign promises. I will do everything to serve Austrians

Ministers from the People’s party will hold the rest of the seats in cabinet, they said. Full details of the new government’s composition and agenda will be announced on Thursday afternoon.

“The negotiations were not easy,” said Mr Kurz, in a press conference from the Winter Palace, Vienna. But he added: “Both parties can keep their key campaign promises.”

“I will do everything to serve Austrians,” added Mr Kurz, promising a programme of action on climate change and tax cuts.

“Those who love their homeland, don’t divide it,” said Mr Kogler, hinting at the compromises his party had had to make in striking a deal with Mr Kurz. The programme agreed will be tougher on climate action than he had expected, he nevertheless promised.

The coalition proposal will still have to be approved by a formal vote from the Green party membership, in a party conference scheduled for Saturday. Many greens are uneasy about the deal with the conservatives, particularly those in its radical and most powerful grouping, the Vienna wing of the party, which will this year have to fight the People’s party in the city’s critical municipal elections.

Though an apparently significant departure on paper from the ideological colour of Mr Kurz’s previous cabinet, the new government is unlikely to break with the core messaging that has so far been crucial to the young leader’s success: a hard line on immigration combined with slick presentation and the promise of a departure from Austria’s long tradition of centrist, consensus governance.

Austrian pundits had already begun to talk about a “coalition of the winners” — the People’s party and the Greens were the big victors in the September polls.

Mr Kurz’s former coalition partner, the far-right populist Freedom party, was the big loser. A lurid scandal in which the party’s former leader, Heinz Christian Strache, was filmed soliciting illicit political funding from Russia, was responsible for his ousting as vice-chancellor in May and the collapse of the government.

Months of further scandal and revelations about the party’s funding and remuneration for senior figures has eroded its once strong base of support, with many conservative voters turning to Mr Kurz instead as a figure of stability and responsibility.

Austria will become the fifth European country to include a green party in government. Luxembourg, Sweden, Finland and Lithuania all have green parties in junior coalition positions.