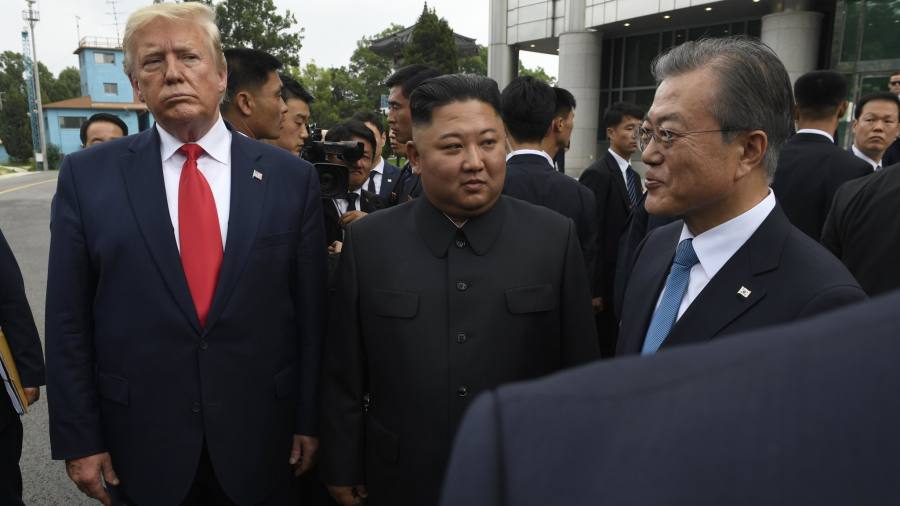 The US national security adviser has warned that any North Korean intercontinental ballistic missile test would complicate negotiations between Washington and Pyongyang aimed at denuclearising the Korean peninsula.

In an interview with the Financial Times as Pyongyang ratcheted up its bellicose rhetoric ahead of a New Year speech by Kim Jong Un, North Korean dictator, Robert O’Brien, the White House national security adviser, said the Trump administration hoped North Korea would not engage in provocations such as an ICBM launch.

“It would not be helpful. We have refrained from significant military exercises in the south. We have done the things necessary to create the conditions for positive talks,” Mr O’Brien told the FT, speaking the week before Christmas. “We hope the North Koreans will not do something that makes it more difficult for us both to succeed in the denuclearisation talks.”

According to North Korean state media on Wednesday, Mr Kim said his country will continue its nuclear programme and introduce a “new strategic weapon” in the near future. Earlier this week, he said North Korea needed to take “offensive measures” to protect its sovereignty.

Pyongyang earlier this month said it would give the US a “Christmas gift” unless it met a North Korean year-end deadline to make progress in the nuclear talks that emerged from the 2018 summit between Mr Kim and US president Donald Trump in Singapore.

While the leaders have held two more meetings since that first summit — in Hanoi in February this year, and in the demilitarised zone that separates the Koreas in June — the two sides have made little progress towards any denuclearisation deal.

“We will have to wait and see what happens with the DPRK,” Mr O’Brien said, using the formal name, the Democratic People’s Republic of Korea. “The door is still open for talks and the path forward is the same path that it was in Singapore and Hanoi and at the DMZ. There is a path to a wonderful future for North Korea. But Kim Jong Un is going to have to give up his nuclear weapons programmes and ballistic missile programmes to go down that path.”

­­Speaking on Christmas Eve, Mr Trump suggested he was not worried about North Korea, despite concerns that a two-year period of lower tensions may be about to end.

“Maybe it’s a present where he sends me a beautiful vase as opposed to a missile test. I may get a nice present from him,” Mr Trump said, before saying that “we’ll see what happens”, when asked about possible US options.

The rising concerns about North Korea come as the US and South Korea engage in tough talks over the amount that each will contribute towards the alliance to maintain 28,500 American troops in South Korea. The US wants South Korea to raise its contribution fivefold from roughly $1bn, an increase resisted by Seoul. The US is preparing to hold similar talks with Japan next year and has demanded that Tokyo increase its contribution fourfold to $8bn.

“It is in the long-term interest of both South Korea and Japan to have the US closely tied to them as allies and partners,” Mr O’Brien said. “But these are both wealthy countries and the US can no longer afford to underwrite their security as we have for many years.”

Mr Trump has maintained a tough stance on the need for Japan and South Korea to pay much more towards the alliances, but some US officials are worried that Tokyo will anger the US president by choosing a British fighter jet to replace its ageing fleet of F2 fighter jets. Japan is next year expected to decide whether to jointly develop an aircraft with the US, or pick the Tempest, a British proposal by BAE that is still a concept prototype aircraft.

The Pentagon has stepped up lobbying of Tokyo in recent months, but Mr O’Brien said he was confident that Japan would choose to work with the US. He said that while the UK had proven its ability to manufacture defence equipment “at the highest level” and would be “in the mix”, he believed that Tokyo would choose a US option.

“I do not see any real competition at this point in the fifth-generation aircraft market,” he said. “It remains to be seen whether the British will even manufacture a fifth-generation jet. It is hard to see how Japan would go for a concept fighter with no customers lined up. Even the UK right now is buying [the US-made] F-35. So, I am not really too concerned about that competition at this point.”