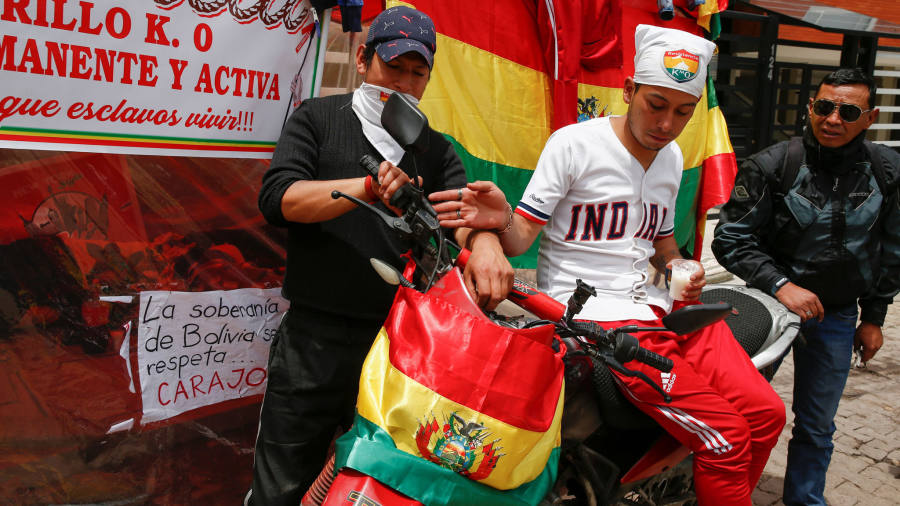 Bolivia’s caretaker government said it would expel the Mexican ambassador and two Spanish diplomats, ratcheting up tensions over Mexico’s decision to grant asylum to allies of former president Evo Morales.

An estimated nine people are believed to be holed up in the Mexican residence in La Paz, among them a former aide to Mr Morales, Juan Ramón Quintana, who Bolivia said must face charges of sedition and terrorism.

Mexico has said the intervention of Bolivia’s military to push Mr Morales to resign in November amounted to a coup and offered asylum to the former president and his allies.

Spain has been dragged into the dispute amid allegations from Bolivia that Madrid sent armed, balaclava-clad people to try to bundle some of those granted protection out of Mexico’s residence, which is under Bolivian police guard. The Spanish government has rejected the claims.

“This group of representatives of the governments of Mexico and Spain have gravely injured the sovereignty and dignity of the Bolivian people and its constitutional government,” she said.

Jorge Quiroga, a former Bolivian president who is now a senior adviser to Ms Áñez, claimed Spain had sent “Rambos” to try to “extract corrupt criminals” last week. “Mexico will one day be ashamed of who it gave shelter to,” he told the Financial Times.

Spain denied any attempt to meddle in Bolivian affairs. In a tit-for-tat response on Monday night, the Spanish government expelled three Bolivian diplomats, declaring them “personae non gratae” and giving them 72 hours to leave.

Bolivia issued an arrest warrant for Mr Morales earlier this month, accusing him of “sedition, terrorism and the financing of terrorism” in the turbulent weeks following the disputed election and his flight from the country. Mexico flew the former president to Mexico City for asylum in November, saying his life was in danger. He stayed a month before moving to Buenos Aires to be closer to Bolivia.

Mexico said last week it had asked for protection for its diplomatic offices in La Paz given the unrest but Bolivia had responded with a military and police operation that was “out of all proportion”, prompting Mexico to file a suit to the UN’s International Court of Justice in The Hague to suspend the “harassment”.