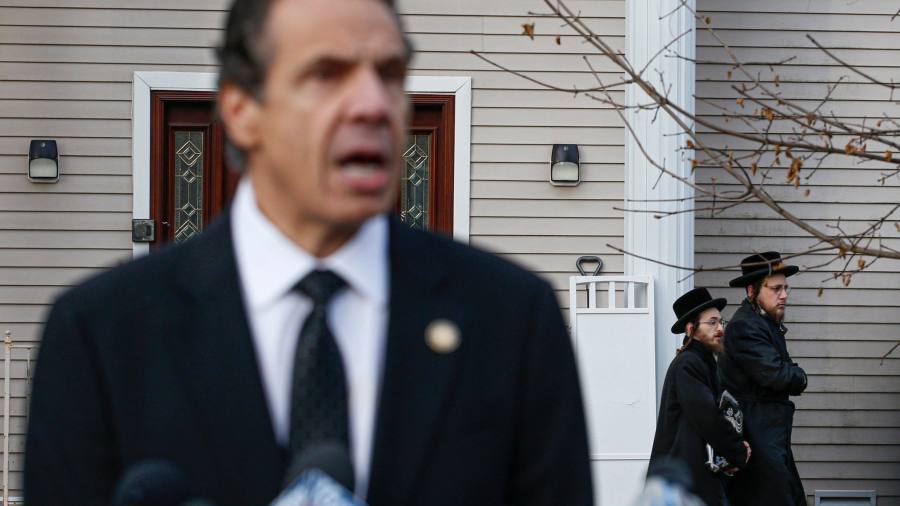 Five people have been stabbed at a rabbi’s suburban home in what New York’s governor called an “act of domestic terrorism”, coming amid a series of anti-Semitic attacks in the region.

The attack occurred at about 10pm on Saturday night as people gathered at the home of Rabbi Chaim Rottenberg in Monsey, north of New York City, to celebrate the seventh night of the Jewish festival of Hanukkah. The town is home to a large community of ultra-Orthodox Jews.

The suspect, according to witnesses and police, burst into Rabbi Rottenberg’s home and immediately began attacking the congregants with a large knife. He then tried to enter the synagogue next door, but found the door locked. One of the victims was reported to be in a critical condition.

Town officials and police confirmed late on Saturday night that a suspect, later named as Grafton Thomas, had been caught in Manhattan. He was arraigned on Sunday and pleaded not guilty to five counts of attempted murder and one count of burglary. Bail was set at $5m and he remains in jail.

Andrew Cuomo, the governor, said: “The cowards responsible for these despicable attacks are trying to inject fear into our Jewish communities, but New Yorkers will always band together and categorically reject anti-Semitism whenever it rears its ugly head.”

Donald Trump, US president, said on Twitter on Sunday: “We must all come together to fight, confront, and eradicate the evil scourge of anti-Semitism.”

On November 20 a man was stabbed on his way to a synagogue in Monsey, and earlier this month a shooting at a kosher grocery store in Jersey City, New Jersey, claimed six lives, including the two shooters.

New York City police have increased patrols in the Brooklyn neighbourhoods of Borough Park, Crown Heights and Williamsburg after a number of incidents this past week in which Jewish residents have been punched, kicked and subjected to racial insults.

Bill de Blasio, New York City mayor, wrote on Twitter on Sunday: “We will NOT allow this to become the new normal. We’ll use every tool we have to stop these attacks once and for all.”

Benjamin Netanyahu, Israeli prime minister, took to Twitter to condemn Saturday night’s attack and the recent incidents in New York City: “Israel strongly condemns the recent displays of anti-Semitism including the vicious attack at the home of a rabbi in #Monsey, New York, during Chanukah.”

Prior to Saturday night’s attack Evan Bernstein of the Anti-Defamation League said: “The overall Jewish community was reeling from what happened in Jersey City. Now to have to deal with this during the holiday season — during Hanukkah — is so difficult. I’ve already been in contact with a lot of Jewish leaders in the region and they’re telling me just how fearful their constituents and congregants are.”

In London on Saturday, anti-Semitic graffiti was found painted on several shop fronts and a synagogue. A Star of David, the Jewish holy symbol, alongside the numbers “9 11”, in reference to a conspiracy theory that Jews were behind the 9/11 terror attacks, was spray-painted on several premises in the neighbourhoods of Hampstead and Belsize Park.

The UK incidents are being investigated by police as being racially motivated hate crimes.