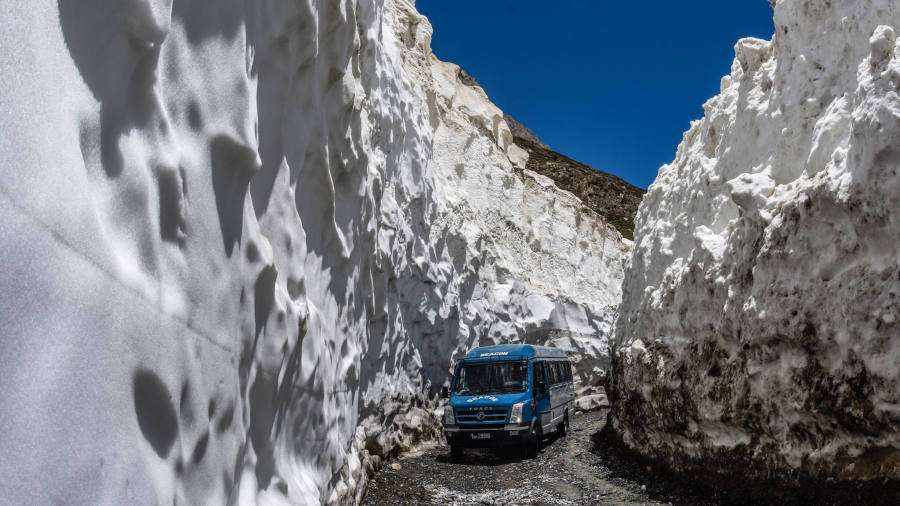 It was meant to be one of Asia’s longest tunnels, linking the fertile Kashmir Valley with the deserts of high-altitude Ladakh. Narendra Modi even travelled to the remote Himalayan city of Leh to inaugurate the ambitious infrastructure project, calling it “a technological miracle”.

The $1bn Zojila tunnel, running along the volatile Kashmir boundary where India fought an armed conflict against Pakistan in 1999, would provide a vital supply corridor for the country’s armed forces, an economic lifeline to locals cut off by snow in winter and a boon to tourists visiting the region’s stunning mountain peaks in summer.

“It will lead to all-round economic and sociocultural integration of these regions,” the Indian prime minister’s office announced in May last year. “It also has immense strategic importance.”

But 18 months later, the state project has ground to a halt. The contractor, Infrastructure Leasing and Financial Services, defaulted in September 2018, accused of wrongdoing and leaving behind about $13bn in debt.

Bidding for a new contractor to complete the 14km, two-way tunnel in what was then Jammu and Kashmir state was halted in August this year, two days after Mr Modi revoked the state’s constitutional autonomy, sent in troops and cut off telephone and internet connections. The delay was expected to add to costs, analysts said, with more approvals required before another round of bidding could be reopened.

The Zojila tunnel has become a high-stake symbol of how the default of IL&FS, a hulking infrastructure group with interests in everything from construction to development to financing, has complicated the government’s push to build vital projects such as roads, ports and power plants.

“If that tunnel ever gets finished, it’s going to take another 25 years,” said Richard Christenson, who worked as a manager on the Zojila project.

Poor infrastructure has long been among businesses’ main complaints. A wave of bad investments in roads and power plants over the past decade had left banks reluctant to finance long-term infrastructure projects. That made funding from the state, and an appetite for risk from debt-laden groups such as IL&FS, all the more important.

The government has had some success. For example, the total length of India’s national highways has increased by about 50 per cent to 130,000km since Mr Modi’s government first came to power in 2014.

In 2017, it opened the Chenani-Nashri tunnel in Jammu and Kashmir, and has also drawn international pension and sovereign wealth funds to invest in the sector.

But the knock-on effect of IL&FS’s collapse has contributed to a broader unravelling in the economy. Worries over the health of the shadowy network of financiers, developers and construction companies that have dominated sectors such as real estate and infrastructure, has prompted banks to cut off credit, leaving other developers in precarious positions and unwilling to commit to new projects.

Bidding for road projects has fallen this year, said rating agency Crisil. And bank credit to infrastructure fell 5 per cent from March to September, according to the central bank.

That has ultimately weighed on growth, with the expansion of gross domestic product falling to a six-year low of 4.5 per cent year-on-year in the third quarter.

Three former Zojila tunnel workers, including Mr Christenson, said that early on in the project financial difficulties became apparent. Important machinery was absent, while supplies such as fuel were scarce. One foreign worker who stayed on through the brutally cold winter months after IL&FS’s collapse said that even food and water for bathing were eventually in limited supply. “They just basically deserted us there,” he said.

Tunnel workers said they had not been paid their wages for months. “The workers who put their work and blood into this project, to secure the livelihoods of our families, have not been paid,” said S Malik, whose Srinagar-based company Tantray Construction was contracted to work on the project. “No one is going to listen.”

The region’s precarious security situation only complicated work on the tunnel, which is located about 20 miles from the line of control that separates India and Pakistan in Kashmir. A suicide attack by a Pakistan-based terror group in February sparked air skirmishes.

When Mr Modi revoked Jammu and Kashmir’s constitutional autonomy and broke the state into two union territories, he promised to bring investment and economic development, including infrastructure.

But for the people of the region, once again facing months hemmed in by snow, the Zojila project is expected to stretch well beyond the promised five years. Locals have been “demanding it for the last 70 years”, Mr Malik said. This has “shattered the dreams of [thousands] of people”.