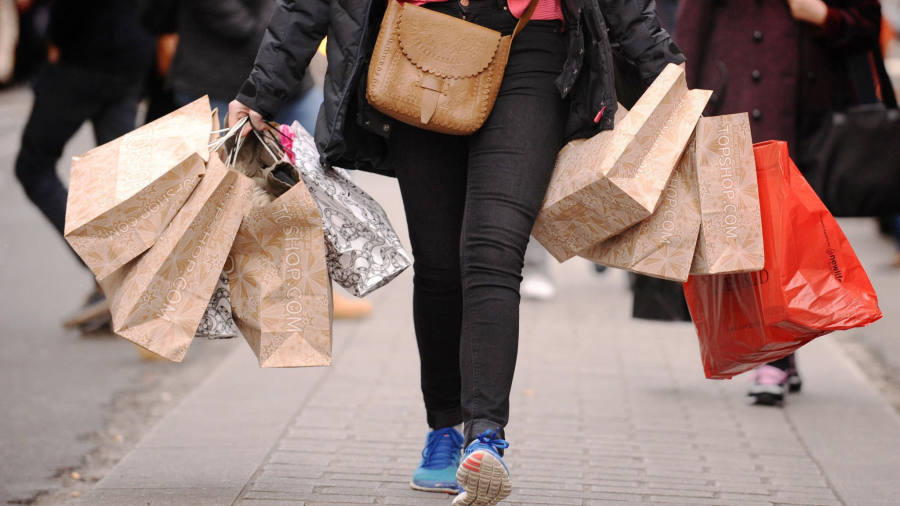 US consumers are expected to send back a record $100bn worth of unwanted goods bought between Thanksgiving and Christmas as the rise of ecommerce causes a returns epidemic.

Online purchases are almost three times more likely to be returned than those in stores, leaving retailers with millions of items to sort.

Clothing is particularly problematic as online shoppers, unsure of exactly what they are buying, are ordering several versions of the same articles with different sizes and colours.

“Shoppers are using their homes as dressing rooms,” said Sucharita Kodali, a former executive at department store chain Saks who is now a consultant with Forrester. About half of womenswear typically goes back, she said. The problem is even worse at this time of year, given that so many purchases are gifts.

The scale of the returns is muting any festive cheer for retailers this holiday season.

Deloitte forecasts that US consumers will splurge about $1.1tn over the November-January period, about 4.5 or 5 per cent more than a year ago. However, the retail technology company Optoro forecasts that the total value of returned goods over the same period will rise more than 6 per cent to about $100bn.

However, the retail technology company Optoro forecasts that the total value of returned goods over the holiday period will rise more than 6 per cent. Over the full November-to-January shopping season, that would total about $100bn.

It is not just that the costs the retailer incurs to make the original sale, from marketing to customer service, are wasted.

Goods that would otherwise be available for purchase are removed from inventories, creating shortages.

Items can lie in warehouses for weeks, said Larisa Summers, a former online sales channel specialist at Best Buy and now an ecommerce specialist with Optoro.

She added that retailers typically lacked the systems needed to deal with the “highly complex” challenge of reverse logistics. “Very few companies are equipped to handle this at scale.”

Each returned product typically needs to be handled individually, adding to labour costs.

In any group of laptops, for instance, some might be scratched and others might lack power cords. That is in contrast to items that are being prepared for sale, which are all the same, allowing retailers to deal with them quickly and efficiently.

By the time electronics are ready to be sold again, they may have been superseded by newer versions. Clothing, similarly, may no longer be in fashion.

Forrester estimates that half of online returns have little or no “salvage value”. “Anything less than original condition and the retailer has to sell it at a discount,” said Andy Mantis, chief business officer at analytics company 1010 data.

Some items are wasted completely. Each year in the US, Optoro estimates, about 5bn lbs of returned goods, equivalent to about 5,600 fully loaded 747 jets, goes to landfill.

The industry is trying to fight back. “For a long time people [in retail] just hoped returns would go away,” said David Sobie, co-founder of California-based start-up Happy Returns. “There’s been acknowledgment, especially in the past year, that this is something that needs to be addressed.”

In the belief that prevention is better than cure, retailers are trying to adopt more sophisticated tools to ensure customers buy the correct size in the first place. Apps such as Sizer and MTailor allow shoppers to use their smartphone camera to measure for the best fit.

Executives largely accept that a high returns rate is an inevitable cost of doing business online, however, and are also reluctant to adopt too strict return policies given the risk of alienating shoppers.

“High returning customers can be some of your best customers,” said Ms Summers.

Indeed, retailers are in many ways encouraging the trend.

Amazon this month said that consumers could now return a wider range of items, including electronics, pet supplies and kitchen appliances, for free — no matter what the reason. Previously only clothing, shoes and bedding were eligible.

One way of reducing the costs is to encourage customers to return items in store. This saves shipping fees and allows retailers to make better use of their physical presence.

It has also struck a deal with Kohl’s, which allows customers to bring back items they buy from Amazon to any of the department store chain’s 1,100 outlets and returns them to the internet retailer free of charge.

At many locations customers do not need to repackage the items — they only need to show a QR code.

Happy Returns runs a network of 700 “Return Bars”, where customers can drop off unwanted items at places such as shopping centres and campus bookstores.

Those who return unwanted items in stores may also be tempted to make other purchases while they are there.

Kohl’s said its arrangement with Amazon had improved store footfall and expected it to boost full-year operating income.

Despite the high costs of returns, retailers feel obliged to meet customer demands to make the process as straightforward as possible.

“The problem is that in this kind of competitive environment they have to make life easy,” says Neil Saunders, retail managing director at consultancy GlobalData. “The consumer is almost being trained to be wasteful.”