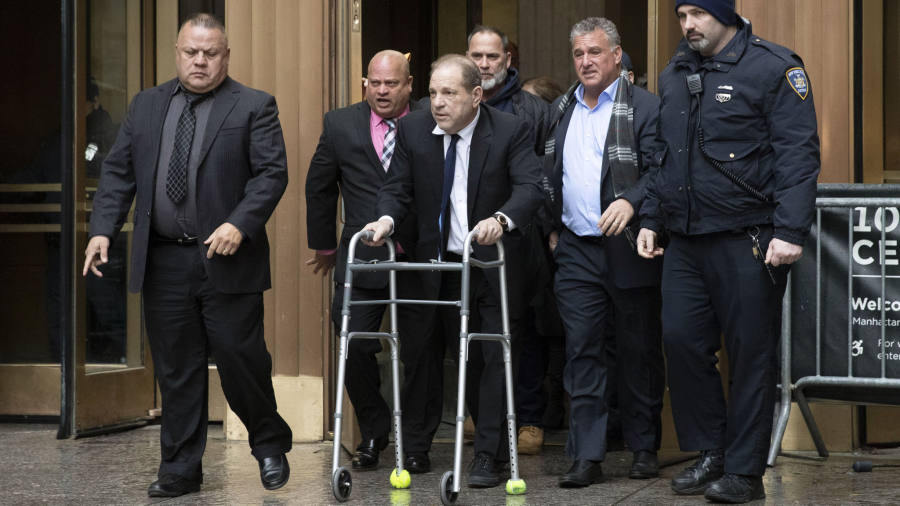 In December an apparently frail Harvey Weinstein, stooped over a walker, arrived at a civil court and agreed in principle a $45m financial settlement with women who accused him of sexual assault. In 2020, a criminal trial will start.

The former film producer cut a weak figure compared with the alleged rapist and aggressor depicted in a torrent of news reports over the past two years, sparking the #MeToo movement that unleashed a flood of personal stories of assault and harassment.

This year the world realised that such complaints were not a blip. As more victims were emboldened to take action, more companies have had to confront the issue and acknowledge deficiencies in their own internal processes.

Rowena Chiu, a former assistant to Mr Weinstein, testified to the difficulty of telling such stories. That it took her 20 years to talk about her own assault was due to the non-disclosure agreement she signed. “When you’ve kept a secret for 20 years, the idea of speaking out is just sheer terror,” she told the FT. “It took time to kind of unravel the story and for me to be ready.”

Two years after signing the NDA Ms Chiu tried to take her own life, overwhelmed not just by the attack but by her inability to talk about it. “A lot of victims sign these types of NDAs and they think — I’m going to start again, I’m going to take this cheque. I’m never going to speak of this again and I’m just going to start my life afresh. The thing is that life doesn’t happen like that.”

Ronan Farrow, one of the investigative reporters that broke the initial stories about Mr Weinstein, told the FT that recent times showed “just how entrenched and corrupt the systems that uphold power structures are, and just how hard it is to break through them. But these stories also show that it’s possible to break through them because sources are as brave as they are and whistleblowers continue to come forward.”

This was again demonstrated when the FT published a report into Lawrence Jones, founder of UKFast, the British technology company. In November, the company announced an investigation into the workplace behaviour of Mr Jones, who has stepped down as chief executive.

Another investigation into the Big Four professional services firms found victims of harassment and bullying, afraid of speaking up and pressured into signing non-disclosure agreements. As one put it: “Much worse than the incident itself is the fact that the company I thought was going to protect me then betrayed me and protected him and hung me out to dry . . . That has been much more damaging to me in the long run.”

Non-disclosure agreements, which have been used by employers to stop victims speaking up, continue to be deployed by corporate and powerful figures. Recently, in an interview with the FT, Zelda Perkins, the former UK assistant to Mr Weinstein, said “huge fear” of breaching NDAs silenced victims. “People are still absolutely in thrall to these agreements.”

Nonetheless, companies have increasingly had to engage with harassment and discrimination. In April, we reported that Amazon and Walmart were under pressure to deal with the issue. “Campaigners have argued that investors should vote in favour of strengthened board oversight to prevent further scandals because such controversies can damage corporate reputations and wipe billions of dollars off market capitalisations.”

The #MeToo movement has helped give victims the confidence to take action. In the UK, for example, the lawyers’ watchdog continued to receive high numbers of reports of sexual misconduct. This widened to pay and conditions too — British employment tribunals received a 69 per cent increase in sex discrimination claims for the year to March.

#MeToo was felt beyond the Anglosphere. The FT’s Women of the Year ran a profile of Yumi Ishikawa, who became the poster girl for the Japanese #KuToo movement, starting with a tweet about painful high heels, part of the country’s corporate dress code. She discussed her past harassment: “I never realised I was a victim . . . for about eight years I suffered in silence because I thought the fault [lay] in me.”

Yet, there are also fears of a backlash. As Sylvia Ann Hewlett outlined in her book, The Sponsor Effect, the #MeToo movement has made men “fearful of suspicions or malicious gossip with the result that they avoid having professional women as protégés”. About 40 per cent of men and women agree that “recent publicity about sexual harassment at work makes it even less likely that a male leader will sponsor a female protégé — even if she deserves it”, according to research by New York-based Center for Talent Innovation, the diversity non-profit organisation Ms Hewlett set up.

Gender politics have also been scrutinised in literature, reminding us that #MeToo is hardly a story of inexorable progress for gender equality. One of this year’s most-talked about non-fiction books was Lisa Taddeo’s Three Women, a bleak account of female sexuality. And Margaret Attwood released The Testaments, her sequel to her 1985 The Handmaid’s Tale, a dystopian story of a theocracy in which women are enslaved and raped as part of a breeding programme.

In an interview with the FT, the Canadian novelist discussed the importance of due process and reflected that novels provide a sense of order, so elusive in reality. “We don’t have the structure of a book in life. There sure isn’t any, ‘The End’.”