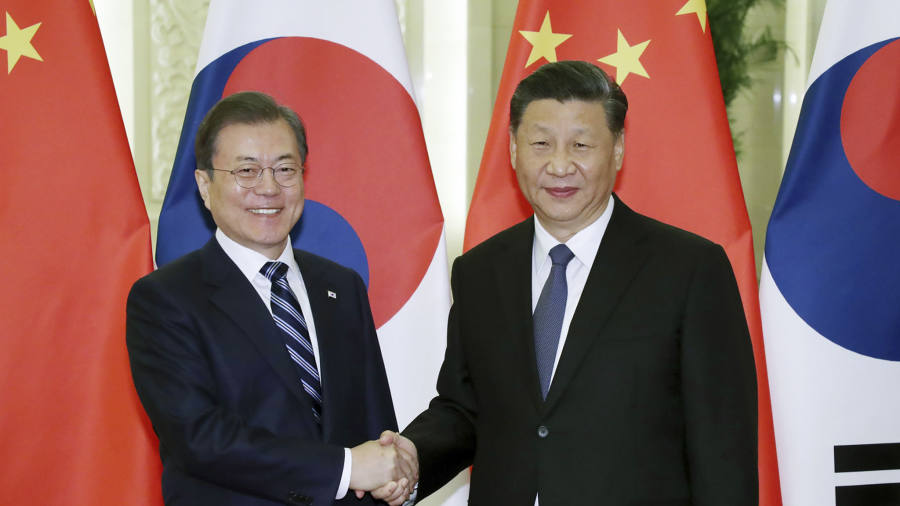 President Xi Jinping played the unlikely role of potential peacemaker between two feuding US allies on Monday as he met separately with Japan and South Korea’s leaders in Beijing.

Japanese prime minister Shinzo Abe and Moon Jae-in, South Korea’s president, will travel on to Chengdu, in south-west China, for a bilateral session of their own on Tuesday as well as trilateral talks with Li Keqiang, the Chinese premier.

The flurry of diplomatic activity has given Beijing a rare opportunity to help smooth over a festering political and economic dispute between Tokyo and Seoul that has complicated long-running discussions to forge a free trade area between east Asia’s three largest economies.

Mr Xi’s administration also hopes that a free trade agreement with Japan and South Korea would help offset its own trade frictions with the US as well as drawing Washington’s two closest allies more closely into its economic orbit.

Japan and South Korea have been at loggerheads for more than a year in a dispute over compensation for historic forced labour. In the summer, Japan imposed export controls on chemicals vital to South Korea’s semiconductor industry; Seoul retaliated by threatening to scrap an intelligence-sharing treaty.

“Trade friction between Japan and South Korea harms China as well,” said Chu Shulong, an international relations professor at Tsinghua University in Beijing. “The three countries are in the same industrial chain, with Japan at the top and South Korea in the middle. China relies heavily on the semiconductor chips processed by South Korea.”

The Chinese government announced on Monday that it would cut import tariffs on more than 800 products, including semiconductors, in the new year as it attempts to boost economic growth.

While Mr Abe and Mr Moon have taken steps to calm the dispute, their only recent encounter was an 11-minute conversation at a meeting of the Association of Southeast Asian Nations in November. The bilateral meeting in Chengdu is regarded as an opportunity to build trust.

“Japan-Korea relations are in a bad way, but when you consider the security environment in east Asia, co-operation between . . . Japan and South Korea is essential,” said Mr Abe before he boarded a plane to Beijing.

He reiterated Japan’s uncompromising line that all wartime claims were settled in a 1965 treaty. “Promises between countries must be kept. The treaty on claims is the foundation for relations between Japan and South Korea.”

By contrast, relations between Japan and China have been improving although Mr Abe will probably raise the increasing presence of Chinese vessels in waters around the disputed Senkaku Islands, known to China as the Diaoyu.

Seoul also hopes Beijing will play a more active role in helping resume denuclearisation talks between Washington and Pyongyang as China is North Korea’s closest and most influential ally.

Concern over renewed tension between Washington and Pyongyang has been growing after North Korea conducted a series of weapons tests in recent weeks.

“The recent situation where dialogue between North Korea and the US was suspended and tension has been rising on the peninsula is never beneficial for not just our two countries but also North Korea,” Mr Moon told Mr Xi.

North Korea’s UN envoy declared this month that denuclearisation was off the table, deepening concern that Pyongyang would resume nuclear or long-range missile testing that had been suspended since 2017.