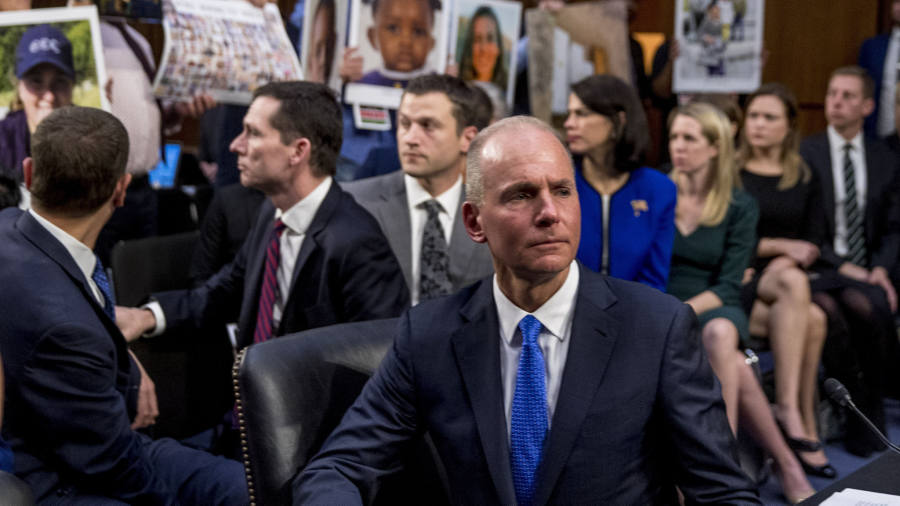 Boeing has replaced Dennis Muilenburg as its chief executive after he repeatedly failed to gain control of the crisis that followed the fatal crashes of two of its 737 Max jets.

David Calhoun, a board director for the past decade who replaced Mr Muilenburg as chairman two months ago, will become CEO from mid-January, taking on the task of restoring the confidence of regulators, politicians, airline customers and passengers.

Lawrence Kellner, the former chief executive of Continental Airlines who has been a Boeing director since 2011, will replace Mr Calhoun as chairman.

Mr Calhoun is senior managing director and head of portfolio operations at Blackstone. His earlier career included several roles at GE under Jack Welch and Jeff Immelt before he became chief executive of Nielsen, the consumer and media analysis company.

The decision to remove Mr Muilenberg was made in a board call on Sunday from which the chief executive was excluded, and follows a public rebuke this month from the US aviation regulator of his “unrealistic” forecasts for getting the Max flying again.

The call came just a week after Boeing’s scheduled end-of-year board meeting, which resolved that it would halt production at its 12,000-strong Renton plant near Seattle, sending shockwaves through the supply chain of the largest US exporter.

Under the company’s new leadership, Boeing will operate with a renewed commitment to full transparency

Boeing said Mr Muilenburg had resigned but made clear he had done so under pressure.

“The board of directors decided that a change in leadership was necessary to restore confidence in the company moving forward as it works to repair relationships with regulators, customers and all other stakeholders,” the company said in a statement.

Shares in Boeing were up almost 3 per cent to about $337 in lunchtime trading in New York following the announcement, against the 12 month-low of about $292. They have fallen by about a quarter since their peak in March.

While regulators are still reviewing Boeing’s fixes to the Max, airlines have been pushing back estimates for when they will be able to fly it again, with United Airlines saying it will not return to service until June.

Boeing had given few details of how its suspension of Max production at the Renton plant would affect suppliers, leaving some analysts to speculate that it could continue paying for parts to be delivered, but on Monday it instructed all suppliers to the Max to suspend shipments for a month from mid-January.

Mr Muilenburg, an engineer, spent his entire career with Boeing but was widely criticised for a faltering and defensive response to the crashes, which killed 346 people. The board indicated that it was aware of the need to improve communication, not least with the Federal Aviation Authority, its domestic regulator.

“Under the company’s new leadership, Boeing will operate with a renewed commitment to full transparency, including effective and proactive communication with the FAA, other global regulators and its customers,” its statement said.

The FAA responded by saying it did not comment on personnel decisions but expected that Boeing would support its work to return the Max to service “by focusing on the quality and timeliness of data submittals for FAA review, as well as being transparent in its relationship with the FAA as safety regulator”.

Mr Muilenburg told the Wall Street Journal last week he had been “humbled” by the crisis and was “changing as a leader” in response. Rob Stallard, an aerospace analyst at Vertical Partners, said, however, that Mr Muilenburg’s leadership had been “less than humble”.

“While Dennis is arguably not ‘to blame’ for the Max grounding, he is responsible for what Boeing has said and done in reaction to the two tragic fatal accidents,” Mr Stallard said. “We don’t think it is controversial to suggest that Boeing’s Max response has been a failure — and as a result we think it is wholly appropriate for the board to replace Muilenburg as the CEO of the company.”

Peter DeFazio, the Democratic chair of the House transportation committee, which has been investigating the two accidents, said the move was long overdue. “Under his watch, a long-admired company made a number of devastating decisions that suggest profit took priority over safety.”

Mr DeFazio added: “I hope the decision to remove Muilenburg means that Boeing is also ready to mark a new chapter in its commitment to safety and accountability.”

Greg Smith, its chief financial officer, will serve as interim CEO during a brief transition period while Mr Calhoun extricates himself from other commitments.

In a note to staff, Mr Smith paid tribute to Mr Muilenburg’s four years as chief executive and 35 years with the company. “Dennis gave his all to the company under extraordinarily difficult circumstances,” he said.

Despite lingering concern from some consumers on the safety of the 737 Max design, Mr Calhoun said: “I strongly believe in the future of Boeing and the 737 Max.”

Relatives of victims of the Max crashes welcomed Mr Muilenburg’s departure but said it did not resolve their concerns.

“Mr Muilenburg’s resignation is a good first step toward restoring Boeing to a company that focuses on safety and innovation,” said Michael Stumo, whose 24-year-old daughter Samya died in the Ethiopian Airlines crash in March.

Boeing’s “focus on financial engineering” had led it to ignore warnings about risks in the plane’s design, he argued, but he called for more directors to resign to build a new culture of excellence on the board.

The company also announced it was bringing in Niel Golightly, a former navy pilot who has led communications at Fiat Chrysler Automobiles, as its new senior vice-president of communications, replacing Anne Toulouse, who will retire in early 2020.